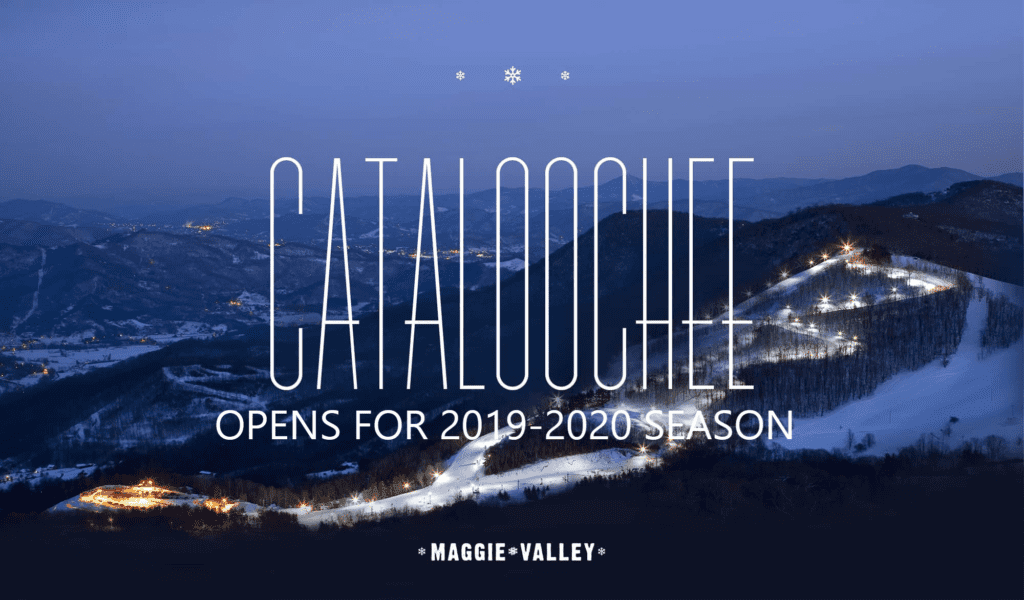 My cell phone rang around 7am this morning. At a glance I saw that it was Tammy Brown, long time “wearer of all hats at Cataloochee”. I answered, “So you’re opening!”, without even bothering with a “Good morning”.

She quickly replied, “We are!”

Tammy is one of those people who wears her excitement in her voice.

Officially, Cataloochee Ski Area is opening today for day sessions only on a day one base of 2-8″, with some bare areas that will be clearly marked. They will open from the mid-station down.

She also shared that Cataloochee will be open for today only and then temporarily close Monday-Thursday at least – to dedicate all of their snowmaking efforts this week – with plans to reopen next weekend.

There will be some who might suggest that Cataloochee should have waited until next weekend. That isn’t the “glass half full view”. For those who will ride the available terrain today, Sunday, November 3rd will suit them just perfectly.

This marks the official opening day of the 2019-2020 for those of us at SkiSoutheast and Cataloochee Ski Area will be the lone ski area open for today.

Sugar Mountain’s crew has been making as much snow as they could since Thursday night, and the plan was to open either Saturday or today, but temperatures were just not quite optimal.

Early on Sunday morning they posted the following message, “Since Thursday night, we have been working hard, squeezing every flake of snow out of the snow machines, but unfortunately temperatures did not allow us to open today. We will continue to make snow, and open as soon as conditions permit. Please stay tuned and think snow.”

I can tell you that Sugar’s snowmaking crew is among the best in the United States and when they say that they were working hard, you can rest assured they were hustling. When I drove by the entrance to Sugar at around 5pm on Friday, they were making “something” with temperatures (at least on Highway 184) at 45°.

Before some of you jump the gun and make the determination that my comment was intended to be critical, think again. Gunther and his snowmaking crew have a bit of “mad scientist” in them as I have witnessed them making snow at 36°. The other thing to know is that it can be 40° at the Sugar Mountain signage on Hwy 184, 37° at the base lodge and then 28° on top of their 5,300′ peak elevation.

Sugar is making snow this morning, as are Beech Mountain Resort and Snowshoe Mountain. Snowmaking equipment is idle at all other ski areas in the Southeast and mid-Atlantic as they are seemingly waiting on the next round of cooperating temperatures.

Snowmaking will continue at the four aforementioned ski resorts as long as temps allow today and then they will likely crank them back up again tonight with temps forecasted to dip back in the mid 20s for Sunday evening. Right now, the forecast for Monday and Tuesday nights looks a bit borderline with lows expected around 31-32° both nights.

The next window of snowmaking opportunities might be Thursday night and then next weekend looks very favorable, as there are even some chances of natural snow in the mid-range forecast for next weekend.

Let’s enjoy Cataloochee’s success for this beautiful day of sunshine on the snow if you have the opportunity to be at the Maggie Valley, North Carolina ski area.

HAS THIS HAPPENED BEFORE?

I barely posted Cataloochee’s lone opening this morning on Facebook, when my email began “dinging”. Questions hit in quick succession:

“Is Sugar not opening?”
“Is Appalachian not making snow?”
“Beech is making snow, why aren’t they opening?”

…and then the one I was really expecting…

“Has this ever happened before (that Sugar and Cataloochee didn’t open on the same opening day?”

To be honest with you, I am not certain, but I’m fairly certain that it has. Somewhere in the cobwebs of my memory I think I remember Sugar being the only ski area opening, with Cataloochee getting open the following day. The truth is, while the two, North Carolina sister resorts always SEEM to be in a marketing battle to BE the first to open – they really pull for each other to get open because it is great for the southeastern ski industry as a whole when either or both get open this early.

Television stations report on it and the message gets spread like a tabloid can spread scandal and rumors of Taylor Swift.

Someone will be the “first chair” honoree, becoming the first person (outside of ski patrol) to make first tracks on the snow here in the region. I’m certain THEY are celebrating Cataloochee’s honor of being the first to open.

Those of us who live in small mountain communities know that those of us who are connected to the snow sports industry within those small communities are an even smaller number. That said, news kind of gets around. I can tell you that Sugar Mountain’s hard charging owner, Gunther Jochl was out of town this weekend as they were celebrating ‘parent’s weekend’ at their daughter’s university campus. There will be some who question whether or not he could have gotten Sugar open today had he been there.

Yes, THAT was another question we received.

Regardless, the next marketing victory will be which resort(s) will have the longest season, the most consecutive days open, etc. HERE is hoping that it is a tie with numerous ski areas providing us with 150 days of slopes-covered bliss!

For a day, Cataloochee Ski Area reigns supreme as the lone ski area open within our coverage area. Will Sugar Mountain be able to open tomorrow? That is another question that we’ll get the answer to early on Monday.

Gunther is arriving back home today. It could happen.