CATALOOCHEE SKI AREA OPENS AT 8:30AM THIS MORNING

7:30am update: Sugar will open today as well at 9am this morning. More as soon as we get that news. Jennifer from Sugar stated that they had from 3-6" of snow overnight. We’ll get the official report in a bit.

8:08am update: Sugar officially is reporting 4" of new snow overnight.

Congrats to both Cataloochee Ski Area and Sugar Mountain for providing us with the official start of the 2010-2011 ski and snowboarding season. As Tammy Brown stated earlier, "It’s really great for all of us that both ski areas were able to get this done so early in November."

That is very true.  Last season Sugar was the official winner by a few hours as being officially the first to open for the season as they opened at 9am and Cataloochee did so at noon. So even though they BOTH will open today, Cataloochee Ski Area will be the official winner as they will open at 8:30am and Sugar opens for the season 30 minutes later at 9am.  Talk about a "photo finish!"

Speaking of photos – SEND US YOURS at [email protected]

Now back to your regularly scheduled reading!

At 6:30am or so this morning a very excited young lady woke me up in my hotel room and it wasn’t my wife! She was almost vibrating with excitement and what she shared with me brought a huge smile to my face. ..and at the end of the call she shared, "I love you babe!" 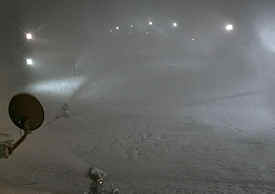 <Cataloochee at 6:30am this morning showing plenty of base to groom and open for the season.

Get your MINDS out of the gutter people! It was Tammy Brown of Cataloochee calling to inform me first (as promised) that Cataloochee would indeed open for the 2010-2011 Ski and Snowboarding season at 8:30am this morning.  She told me, "Good morning. I told you I’d be calling you first thing and we’ve received 4" of NEW SNOW and our snowmakers are making snow to beat the band and we’re going to open at 8:30am."

You could tell that she was smiling from ear to ear and that she was almost coming out of her skin with excitement.

She added, "I’ll buzz you back because they’re out there on the hill right now so I don’t know what we’ll be open with, etc but we’re excited."

It’s too early to make the call to Sugar Mountain this morning but so far there’s no news of an opening bell over there. We’ll keep you posted.

I can tell you that there is more pre-season excitement amongst our viewership than we’ve ever seen before and we’ve been at this now for 15 years. That bodes well for what we hope to be a phenomenal ski season and with Cataloochee’s opening bell – the season has officially started!

I’m out of town, so if you’re over at either ski area today send us your photos or videos so that we can share them with our readers! Skimail us at [email protected]