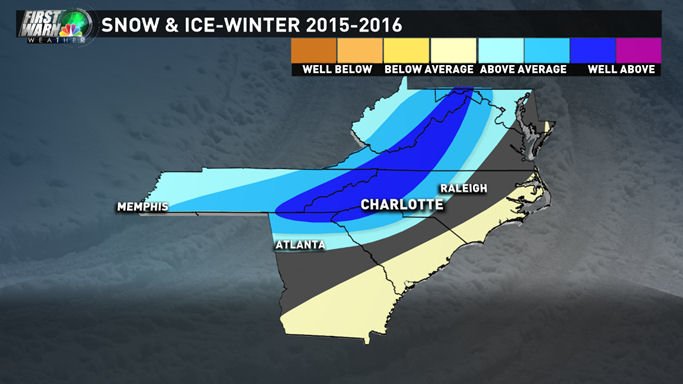 El Nino is something you have likely been hearing about since earlier this year. What it is and it’s impacts on our winter weather are very well established. What El Nino means is an above normal warming of the waters in the Pacific Ocean off the west coast of South America. This warming water makes a connection to the atmosphere above it and causes a major pattern shift during the cooler time of the year over North America. 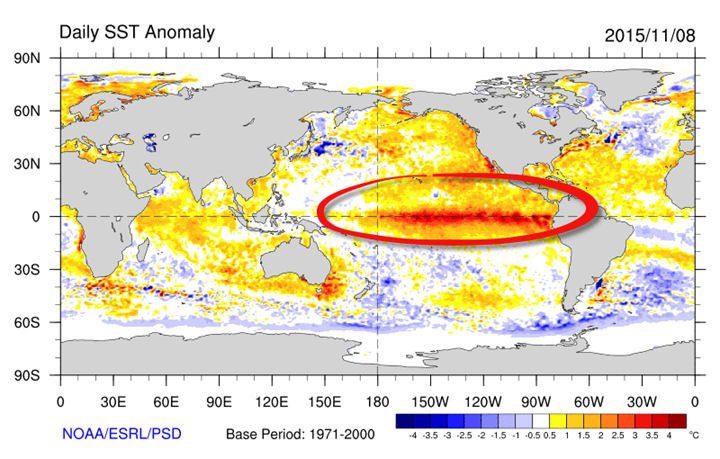 The warmer than normal water shifts the southern branch of the jet stream into the southern U.S. from California to the Carolinas. The main impacts of this shift are felt in the winter and spring after El Nino forms. This year we are forecast to have the strongest El Nino on record. The records date back all the way to 1950.

The implications are huge for winter weather, and we should have a very active storm track with above average precipitation. Kind of like we see right now this Autumn. Here is the average pattern during El Nino Winters. 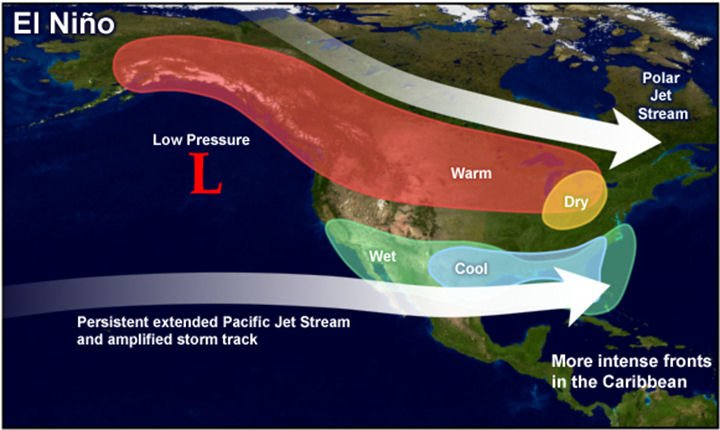 There is probably no stronger correlation in long-term weather forecasting than El Nino. For the southeast, there’s a true signal of more precipitation in El Nino Winters than any other set-up. Especially when the El Nino is considered strong.

The next obvious question is, What about snow? Well, the signal appears to be mixed based on strong El Nino’s. There have been some very large snowfall winters during El Nino, but also some below average.

When you average all the EL Ninos, La Ninas (Cooler than average water) and the Neutral years, a pattern does emerge. Of all the phases of warming and cooling in the Pacific Ocean, we clearly have on average received more snow in EL Nino Winters since 1950.

Based on the active southern branch of the jetstream we should see more storms which means more clouds and more precipitation. That will on average make the entire Southern U.S. cooler. I’m not going to stray too far from that pattern this year and forecast that we will be slightly below average temperature wise this winter. However we will not likely be seeing many bitter arctic outbreaks that typically don’t make it too far South in El Nino years. It seems weird, but the polar jet stream often keeps the polar air locked up, but the cooler than average temperatures across the south are due to more rain and clouds. Moreso than lots of arctic air spilling south into the Southeast. 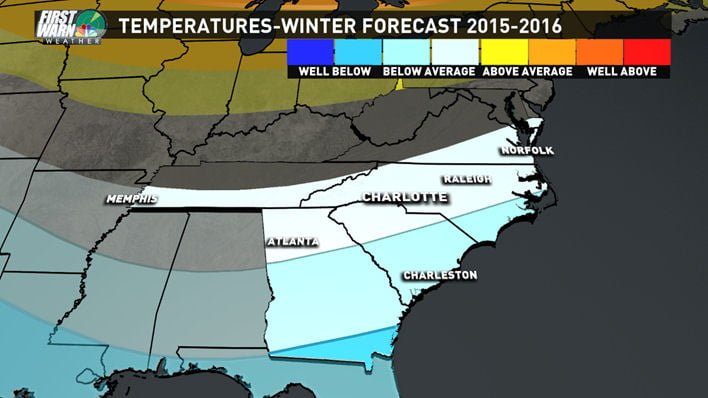 Like we have seen so far this Autumn, rain is going to be around quite a bit. With the southern branch of the jet stream so active, you can see storms every 2-3 days when it’s sitting right over you. So from California to Texas to the Carolinas we will see lots of wet weather during the Winter. I don’t see any reason to stray from this with the very strong El Nino setting up and the fact that we have already seen this pattern start in October and November. 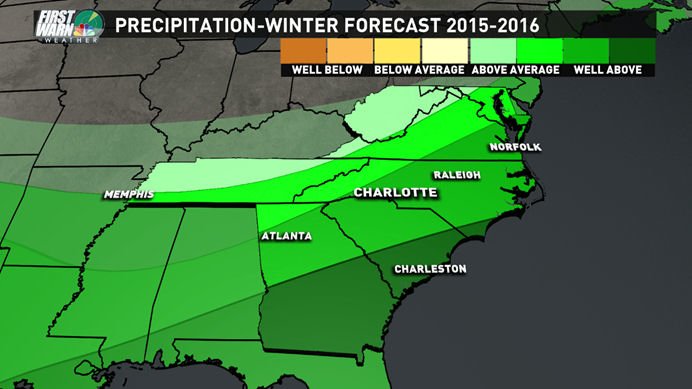 It’s funny when people see we are going to have El Nino, and they know that means cold and wet for the winter. The first reaction is, we will see more snow. We’ll be cold and wet but that can sometimes mean lots of cold rains and that, in fact, is going to be what most of our winter storms will look like this winter. Rain and upper 30s is miserable and a very typical with many Southeast winter storms. Though because we will have such an active storm track and lots of moisture around it only takes a few times during the winter for one of those storms and enough cold air to make for a major winter storm. Some past winters even when we have had pretty mild temperatures and mostly rain we can end up with above average snowfall just because of several big storms. If we get just the right storm track along the east coast or up I-95 then we could have some nice big snow events in the Mountains of the Southeast.

This winter I am thinking exactly that way 3-6 big time storms that bring all our winter weather. In between we have a lot of close calls and mild breaks with cold rains. I also am every concerned with ice. Because the cold air is bottled up north due to the placement of the polar jet stream when we do get the cold air it’s shallow in nature. The classic “Cold Air Damming” setup where the arctic high is are over New England and that cold air oozes down the eastern slopes of the Blue Ridge and gets trapped. So my concern for ice will be something I want to watch out for this winter.

Final thoughts and other things to watch:

The active storm track and wetter than average are the most confident part of my winter forecast. I don’t think we will be hurting for moisture this winter. The thing we will lack for snow and winter weather lovers in the consistent cold air. The only thing that could change that would be blocking becoming more persistent in the Northern Atlantic. The blocking can lead to more cold air for the east coast. This blocking is only usually detected a few weeks out, and it is hard to say how much and how long it will last. 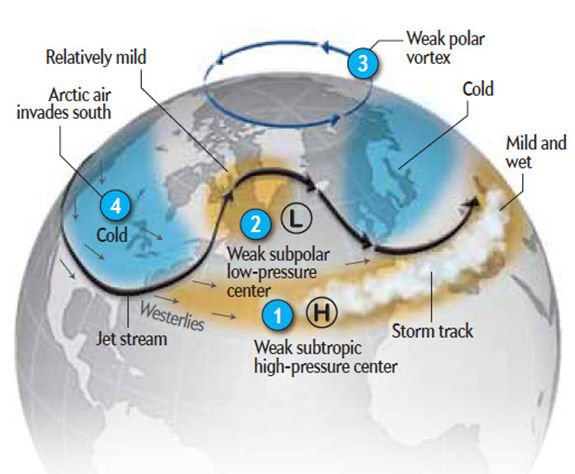 This blocking at times can give you hints by looking at October snowfall over in Siberia. When it is above average, we tend to get more blocking in the Northern Atlantic and thus more cold air on the east coast. The October snowfall there was above average this October but was down from last year at this time. Sometimes the connection to this snowfall does not always translate completely but it is something to keep in mind.

So until we see blocking, I think it is safe to say it will be hard to get consistent cold this year. All it takes though is this active southern jet stream to phase or sync up with the Northern branch jet stream, and we could see some big time Southeast winter storms this winter.

Brad Panovich
Brad began providing weather input for us and our visitors several years back when he was doing weekend weather for WCNC, NBC 6 in Charlotte, North Carolina. He's been a fan of the website for years and mentioned us on the air numerous times and during the 2008 season he began providing us with invaluable Winter Forecasts and forecast video input. We asked Brad to join our staff prior to the 2009-2010 season to provide our visitors with video forecast updates every other morning throughout the season and those video updates are one of the more popular page visits each day since. Here's some more information on our snow loving weather guy!