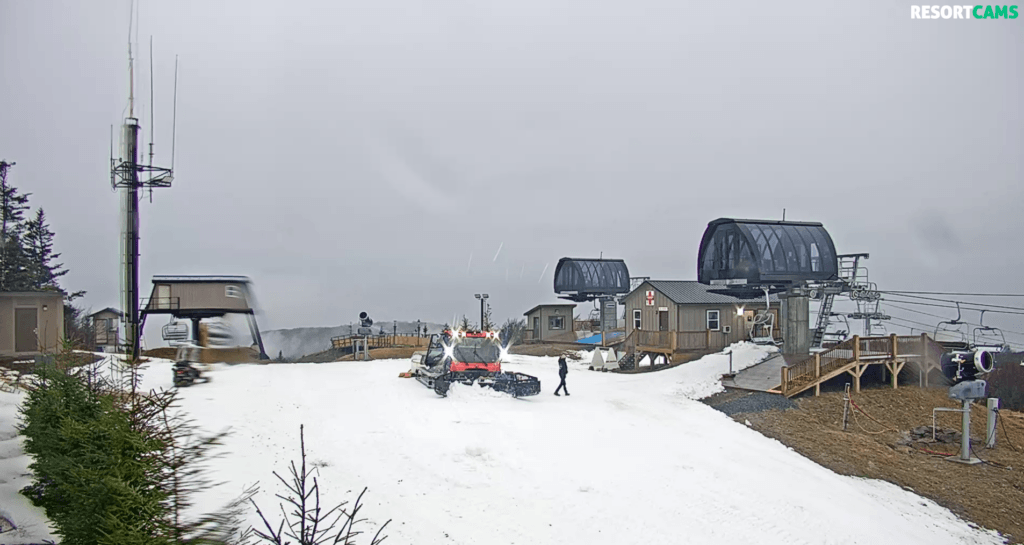 Snowshoe Mountain enjoys DAY TWO of the new season. Appalachian Ski Mountain and Bryce Resort are moving into their second week of operations and of course Cataloochee and Sugar have been going for a few weeks now.

This particular, pre-season, Saturday before Thanksgiving is a mixed bag of tricks in terms of conditions and temperatures depending on where you look, but we’ll get into that in a moment.

Man a lot happened this past week.

Obviously, the biggest news of the week was the sale of Timberline Four Seasons Resort to new owner, Chip Perfect of Perfect North Slopes. You can read the full story HERE

Thanks again to Chip Perfect for taking the time to do that exclusive interview with me. I had previously planned on sharing some of our reader comments about the sale, but we had so many we couldn’t do them all justice. Suffice to say that there are a LOT of old-timers and Davis, WV, and Timberline Resort LOVERS out there who are just elated to have heard the news and everyone is excited to see them reopen for the 2020-2021 season.

(To the lady who emailed about the fact that we were reporting OLD NEWS and that we should update our story to reflect Timberline being sold…jeesh…that was SO a story from the day before. haha.)

Conditions could not have been much better earlier in the week even for a mid-January date on the calendar. However, some light to moderate showers and temperatures in the 40s and 50s managed to put a literal damper on conditions as we are now seeing some resorts that are just not what we want for the weekend prior to the more traditional opening of Thanksgiving.

Conditions at Beech Mountain Resort were simply marvelous over the past week or so while they were making snow and prepping for their opening day – which is today, Saturday, November 23rd. They are still opening, but let’s just say they would have preferred to have conditions as they were earlier in the week.

Conditions are simply foggy, drizzly, damp, wet, dreary and all around meh as I looked around at the LIVE STREAMS this morning…except up around Canaan Valley where they are not yet open for the season. They are slated to open December 13th. Canaan Valley had a trace of natural snow overnight and they’ve already seen 6.9″ of snow during this pre-season period.

The craziest part of the SNOW REPORT for this pre-Thanksgiving Saturday is that temperatures are ALL OVER THE PLACE. Check these out:

Reporting the OPEN RESORTS for today in Alphabetical order…

Beech Mountain Resort – 46° 5 slopes for day sessions only today. Skating and tubing are not yet open. We witnessed them grooming this morning via our Photo of the Day today

Bryce Resort – 27° Open with 2 slopes for skiing, snowboarding and the also have biking for day sessions today.

Cataloochee Ski Area is showing 45° this morning and open with 5 slopes from the 3/4 station down and 2 lifts for day sessions open today.

Massanutten Resort is enjoying their EARLIEST. OPENING. EVER. (Using their reported emphasis! Come ski and ride top to bottom on Saturday with Diamond Jim, Southern Comfort and Easy street open. They will have 3 slopes and a base of 24″ for day sessions only.

How about THIS photo posted less than an hour again at the sunrise and corduroy at Massanutten!

Ober Gatlinburg has announced that their Snow Tubing Park will begin daily operation at 11am today. The slopes will open soon.

Snowshoe Mountain is looking like the gem of options for riding the snow today with temperatures in the low 30s and after all of the HUGE whales of snow they made, opening day yesterday was epic. They shared a nice video of the rope drop and we received a few photos that we’ll share.

They are open today even after some overnight snow making with 11 trails on a 55″ base for day sessions. Progression Park is ready for shreddin with 11 jibs, a hip, and a booter. Their snowmakers got a nice session in last night and the forecast is looking good for more opportunities over the next week.

Sugar Mountain – 44° at their base with 7 slopes on a reported base of 16-28″ for day and night sessions. Reduced lift ticket rates are in effect today according to their website. We noticed on Friday that Sugar reported an 1″ of snow on Wednesday, the 20th. Not sure where that came from. Even Ray Russell’s AveryWeather almanac is reporting a TRACE amount of snow. Like Beech, Sugar has seen 2.2″ on the season.

Winterplace Resort – we are working with Warren and the guys at Winterplace as they are implementing a NEW webcam for the ski area. According to Kenny, that new camera may go LIVE today. Winterplace is not yet open for the season.

Thanks to young, master Christian Deiss a sports columnist for the Charleston Gazette-Mail newspaper for his interview earlier in the week. He was actually my third interview this past week, but deserves a special mention because he is a veteran columnist as a 14 year old.