As I usually do prior to each new season – I dropped in on Appalachian Ski Mountain’s Brad Moretz yesterday. As usual, the place had me waxing nostalgic. Don’t misunderstand my meaning, because this place is nothing if not one of the most modern and efficiently ran ski areas in the land. It’s nearly always meticulously well kept from the grounds to the lodge to the bathrooms…everywhere. Everytime I show up there’s a buzz of activity going on, with staffers scrurrying around. You get the feeling that you’ve morphed into a beehive and that you’d better find something to do, because everyone around you is busy. 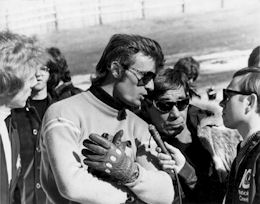 However, from the heavy Alpen influence on the lodge, to the giant picture board on the rear wall near the admin offices, this place wreaks of nostalgia. While Appalachian Ski Mountain continues to make upgrades and look towards the next decades of skiing and snowboarding – with whatever new technologies come to the industry – they have always celebrated their past. Those old photos posted on the board have been there for years, with some new ones added occasionally. There’s a great photo that shows former World Champion Skier Jean Claude Killy posing with a very young Brad Moretz and his sister Brenda. It was taken in 1972. I didn’t ask, but Brad looked to be about 10 years old or so. 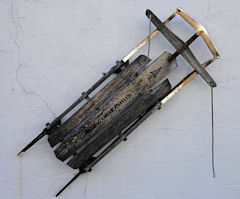 At that time, I was nineteen and not into snow skiing just yet. I was crazy into snow though. I was living in one of the hottest cities on the planet (Columbia, South Carolina) and everytime we heard it was snowing up this way, I’d head to the mountains. About a foot of snow had fallen and I, along with my parents, aunt and uncle, and some other family members piled into a couple of vehicles and drove up from Hickory to Blowing Rock. We stopped at an old Western Auto store and purchased a couple of those old American Flyer snow sleds and a toboggan.

Somewhere (that still escapes me today) close to the Blue Ridge Parkway just off Hwy 321, near to the turnoff to Appalachian Ski Mountain, we pulled off the road and joined about a dozen others who had already found a remarkable piece of real estate that had tons of powder to ride over and over again. While sledding there we overheard others talking of Jean Claude Killy making an appearance at the ski resort. Appalachian was celebrating their 10th anniversary and even though none of my family was into skiing at that time – we DID know who Jean Claude was – so we made the short drive to App.

The slopes were full of people dressed in colors that I didn’t know existed until then. We hung out for quite some time before heading back down the mountain. Although it would be a few years later before I became hooked by the sport, I’ve never forgotten that great day on the snow. A few years later, Appalachian Ski Mountain became the first ski area that I skied.

Maybe it’s for those reasons that I get that feeling of nostalgia when I walk in that place. Regardless, it is a cool lodge, located on a cool mountain, ran by a cool family that manages to hire great people. You see mostly the same people each and every year and they always great you with a smile and "How are YOU doing today?" …and you get the feeling that they R-E-A-L-LY want to know.

This year App will probably be in a slightly more nostalgic mode as they turn 50 years old during the 2011-2012 season. The ski area was the second ski resort to open in the state of North Carolina (one year after Cataloochee had opened over in Maggie Valley). It first opened in 1962 as "Blowing Rock Ski Lodge". Back then there was only ONE Blowing Rock motel that stayed open during the winter months.

Like most early ski areas, the old Blowing Rock Ski Lodge fell upon hard times before Grady Moretz and four other partners purchased the area from the Northwestern Bank at foreclosure at a public auction.

Originally the area consisted of a 12,000 square foot base lodge and three slopes serviced by two rope tows and a T-bar.

In the summer of 1969, Appalachian Ski Mtn. replaced the rope tow on Strudel with its first chairlift, a double. Three years later in the summer of 1972, the T-bar on Big Appal was replaced with a second chairlift. The area continued to make improvements every year. Among these improvements were several additions to the lodge that enlarged the rental department, ski shop and the restaurant, added a new first-aid room and ski patrol room, more office space, and a gift shop. Other improvements included the first airless snowmaking in North Carolina, a new sewage treatment plant, several new slopes, new compressor house, four Ingersoll Rand screw air compressors, an enlarged snowmaking water reservoir, and, in 1985, a new LMC groomer and tiller.

The biggest expansion in the history of the area took place when a Doppelmayr quad chairlift was installed and 6,000 square feet was added to the lodge. This was the first quad chair lift in North Carolina. The next year the Moretz family acquired sole ownership of Appalachian Ski Mtn. in 1986. 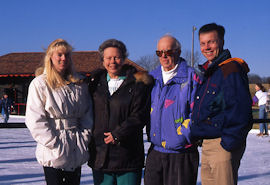 <Brenda, Reba, Grady and Brad posed in front of the lodge circa 1985.

Appalachian Ski Mtn. has expanded to twelve slopes including two terrain parks serviced by one double chairlift, two quad chairlifts, two conveyor lifts (new in 2010) and one handle-pull lift. The base lodge now covers 46,000 square feet, is smoke free, and has complimentary WIFI in the restaurant.

So – while "she’s" turning 50 years old – this place is still THE place to take your family skiing and snowboarding. Conditions are nearly always among the best in the region as Appalachian can create a BLIZZARD with the snowmaking system that covers every square inch of the mountain at once. They can usually make so much snow overnight that they rarely ever make snow during ski and snowboarding sessions. So you can enjoy great snow while not having to fight the snowguns.

Appalachian planned to open November 18th, however it appears that things will have to hold until the weather cooperates. As of today (November 16th) it looks like we will have snowmaking opportunities Thursday and Friday nights…but when talking with Brad he commented, "I don’t think we’ll be making snow just yet. The ground will be warm and the temps just are not going to hold. So we’ll have to wait it out a little longer."

The forecast looks MILD after this late week blast of cold (two nights) for the REST OF NOVEMBER! Even looking up at Snowshoe the forecasted highs should be in the 40s and 50s with lows only in the mid to upper 30s for the next ten days or so. 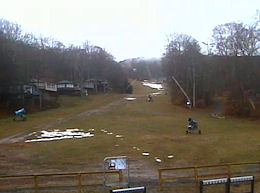 I know there was talk of Cataloochee and Sugar Mountain reopening. Sugar has previously announced that they were to be close Tuesday and Wednesday of this week (hinting that they’d be reopening Thursday or Friday). However both mountains will have to nearly start over as there’s almost NO snow left from last weekend’s two night blast. Cataloochee is still showing a Saturday reopening on their website and they (AND SUGAR) could blast out some snow Thursday and Friday night just to get open again for this weekend. However with the long range forecast looking "non-cooperative" for the rest of the month, you’d have to think that they could be reconsidering making snow and waiting with the rest of the ski areas until consistent cold temps come our way.

According to our guy Kenny Griffin and the rest of the weather gurus in the region…it looks like we may have to wait until December. While we may see a night or two of snowmaking weather, things look mild through the end of the month around the entire Southeast and Mid Atlantic. However there are signs that things will get cranking in early December. It usually does and as long as by mid December things are deep in base coverage with all the slopes open – we’ll be happy right?

Like the resorts…we’ll all have to wait and see!

Feel free to email me with your stories, comments and more at: [email protected]

Previous Post
Sugar’s Closed for Tuesday and Wednesday. Snowmaking Temps Return Thursday Night
Next Post
Some Resorts are Cranking out SNOW Again! Some light, natural snow is falling as well!