Another Sold Out, Packed House, Sunday at the Ski Resorts

…and my day to ramble, aimlessly from subject to subject and place to place as things come to mind.

Today’s Photo of the Day is compliments of the Mountain Messenger at Wintergreen Resort.

Be sure to check the SNOW REPORT for all of the deets today. Within those details, you will notice that base depths went up again after a full day of snowmaking opportunities across the entire Southeast and mid-Atlantic. Most resorts only made snow before and after open sessions as the base depths are so deep right now.

Those of you who have frequented this space over the years know that I used to spend way more time than I should have on the fact the our ski area managers don’t r-e-a-l-l-y go out and measure the snow base day to day. I’ll go a step further and say that most NEVER measure it. So where do the numbers come from? Experience mostly. They know that they can lay down six inches of manmade powder overnight, across a wide area of their ski mountain and while they may not be measuring it…they have a decent idea and their shared, marketing numbers are relatively accurate. (I don’t know how accurate 70-100″ reported based depths are…but that’s another story for another day. I really don’t talk about base depths much anymore.)

However, if I really wanted to get some accurate snow-depth data, there is a new gadget on the market, by Propagation Labs called the Smart Avi Probe. For $1500, resorts (or overzealous idiots like me) could know base depths in seconds.

There are other products on the market that will do that, but nothing this simple and easy to use…AND it has its own APP, that provides more data regarding the quality and makeup of the snow.

Back on the Subject of Snowmaking…

Interestingly, there was ONE ski area (Wolf Ridge Resort) where the base depth dropped a few inches over the last 24 hours. Wolf has not made snow in the last several days when they could have. They’ve been having lift issues with their main lift and they’ve only been able to offer three beginner slopes this weekend. That has led many to speculate on social media that Wolf Ridge may actually be done with snowmaking for the season and already be closing in on a closing date for the season – way prior to normal.

We’re not so sure about that fact, however, we can share that there are not many people hitting the slopes on the busiest weekend of the season for most Southeastern ski areas…AND the sides of the slopes are already “creeping in”. Not a good sign. Maybe those who have taken to Social Media might be on to something.

Compare that image with that from Sugar Mountain at 8:45am this morning.

The slopes were packed to the gills on Saturday as most resorts were SOLD OUT. Most are SOLD OUT again for today, Sunday. I can tell you that I was on Highway 184 yesterday and the traffic was backed up from the stoplight at Hwys 105 & 184 ALL THE WAY TO SUGAR MOUNTAIN. Bumper to bumper.

You can check out the LIVE SKI CAMS anytime to see the mass of humanity for yourself!

I have to begin by sharing the fact that Saturday was a gorgeous day, but w-i-n-d-y as hell. Sunday will offer another day of brilliant sunshine and the wind has finally died down. I can also predict that Sunday will be yet another day of packed-to-the-gills slopes.

We’ve had an amazing run of great weather for the ski areas and those of us who love to play on the slopes. December was o-k-a-y, and January-February 20th (today) has been simply perfect. We’ve had very little in the way of rain. We’ve had plenty of natural snow to excite the masses, and we’ve had consistently cold temperatures to make snow. You couldn’t ask for much more, really.

While it is too early to forecast with certainty what March will deal us – I can share that it was great to get in decent weather for most of the resorts for the Christmas-to-New-Year week and for both the MLK and President’s Weekend.

At about the time that most of this weekend’s guests will be heading home – we DO have some yucky weather headed in. Monday through Wednesday of this week looks about as rainy as we’ve seen it all season. Early forecasts are showing that as much as one-to-two inches of undeveloped snow (rain) is heading into the region. The good news? We see a return to snowmaking temperatures on Friday night and even some chances for natural snowfall over the weekend – next weekend.

We don’t like to put too much stock in long-range forecasts, but from what we can tell right now – things look pretty seasonably cold at least through the first week of March and THAT bodes well!

I’m certain we’ll hear from meteorologist, Brad Panovich with more intel about how the last 4-6 weeks of ski season will go.

You Know, Those Outhouse Races at Sapphire Valley Resort are Dangerous!

Thanks to Andrea Buchanan for filming and posting these to YouTube. We show three of the clips, but you can see more if you are a glutton for punishment.

Suffice that you need to (at least) watch the first set of vids.

Andrea shared all of her on the playlist below!

I was browsing the LIVE STREAMS this morning and came across one of Snowshoe Mountain’s talented groomers at Silvercreek this morning. There was a nice mound of snow at the bottom and I watched as this guy ran back and forth for 15-20 minutes just churning (farming) this part of the base area, until finally laying some corduroy.

Now HERE is the video capture for those who want to watch a master at work! (Forgive the Background Noise)

Here is a nice video capture of our friends Joe Stevens and Tom Wagner as they appeared on WSAZ Television earlier in the week.

Time to Shop Til You Drop…

All of the ski areas offer great deals in the shops as the season begins to wind down. President’s Day & Weekend is no exception. Check out this from Ober Gatlinburg!

The Shops at Ober 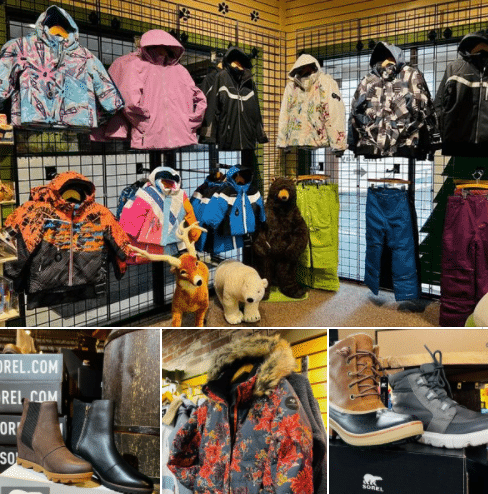 Enjoy 50% off winter apparel, outerwear and footwear for the whole family.

If you have never visited Ober Gatlinburg, you really owe it to yourself to do so. This ski area and the surrounding shops atop the mountain are unique to say the least. There is a large, mountaintop mall area with indoor ice rink, restaurants and more.

They also have the only aerial tram that will take you down to the downtown Gatlinburg strip.

The aerial tram ride is worth the trip by itself.

You Think Sugar Mountain can get crowded on a Holiday Weekend! This was sent to us.

You would think that with the ski areas themselves SOLD OUT, that our traffic here at SkiSoutheast.com and ResortCams.com would be limited to some degree, Wowzers, no. On Saturday we saw over 130,000 visitor reach with the websites and our Facebook and Instagram pages.

…and we have to thank YOU GUYS for that. Keep coming back, please! I will be doing a Monday version of rambling since it is a Holiday. We’re giving Matt Laws an extra day of rest!