Even Meteorologist Brad Panovich is talking up this weekend within his latest Skier’s Forecast Video which is already posted and available one click away.  The weather link is right on top of the front page, above the ski resort links. The address is: www.skisoutheast.com/weather.htm

The forecast probably could/should be summed up as:

Expect mostly crowded slopes with some breaks that will allow for some actual skiing or riding for this weekend. We’re also forecasting heavy, frontal boundary systems at the base of every lift in the region that will cause some travel delays (up the chair lifts and back onto the slopes). Weekend travelers should also anticipate some intermittent stoppages in traffic – ( as this is also the biggest "newbie skier and snowboarder" weekend as well. With a lot of beginners on the lifts…expect lifts to stop and go all weekend long as learning skiers and riders have difficulty getting on and off the lifts.

The keyword of the weekend will be – PATIENCE.

Plan to exhibit lots of it and you’ll have a great time. Also if you want to hit the mountains this weekend at the LEAST busy time, then get your rear out of bed early and BE ON ONE OF THE FIRST FEW CHAIRS each morning over the weekend. Those ON THE SLOPES at 9am will see far less traffic compared to what the slopes will look like by 11am or so each day. Most people tend to chill a bit in the morning and also the group ski crowd tends to have to go through the arrival, sign ins and they take a bit of time to get their rental equipment, get it on, etc, etc. So if you happen to be hitting the trails this weekend, hit it early and get in as many turns down the mountain as you can before 11am. Then take YOUR lunch break a little early 11:15am or so and you’ll beat the heavy lunch crowd. Go back out on the slopes around noon and things will be a little less crowded. (Okay not much, but at least somewhat.)

This is a FOUR DAY WEEKEND for a lot of people who are out of school and out of work Friday, Saturday, Sunday and Monday. The weather looks like it will be an awesome weekend, that is nearly perfectly timed for some sunny skies at many of the ski area locations and perhaps with some "ambience snow" at some of the West Virginia, Maryland and even around the higher elevations of the North Carolina mountains over the weekend. Expect cold temps that might mild up to near 40° on Saturday in the NC mountains. Overnight lows will be in the 20s and that should make for some great temps for skiing.

"Ambience Snow" is snow that might fall from the sky as flurries or snow showers, but no real accumulation is expected over the weekend. Weekend travelers may way to keep their eyes on the Monday forecast to time their departures around what could be some mixed precip on Monday (especially Monday afternoon and evening) as perhaps even some freezing rain could be in the mix Monday.

Compared to the crazy cold and snowy winter we’ve had thus far, this weekend’s highs will look like a "thaw" but normal/average highs and lows for this time in January (using Banner Elk as an example) are 40.5° for a normal high temp and 18.9° for a low. So we’ll not see any "thaw" happening around the region.

The forecast into the next week is for things to turn BACK colder with some possible snow in the middle of the week and cold temps going into the following SkiNC Summit weekend!

Brad Panovich was saying the other day that if things continue as they have so far this winter, that we are on pace to see the coldest winter in 60+ years and perhaps the colder winter on record. Additionally, with 101.2" of natural snowfall already recorded at Beech Mountain, we could easily see record snowfall for some areas of the southeast and mid Atlantic. Last season’s 122" is definately within easy striking distance. The 2009-2010 snowfall numbers at Fred’s General Mercantile, which is located atop Beech Mountain, was officially 137.6" of snow. Fred’s is the only Official National Weather Reporting station in the area and records the weather daily for forecasters data. That 137.6" was the most snowfall recorded in one year on Beech Mountain and even that number is within easy striking distance – so we could some records fall before this winter is over.

So much for global warming. So much for preseason forecasts that predicted less than normal snowfall and warmer than normal temps for the winter. Boy, howdy were they wrong! 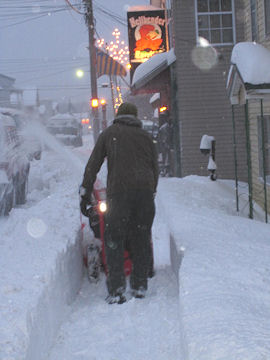 Susan Moore of Bright Morning Inn in Davis, West Virginia provides a blog of sorts talking up that area around Canaan Valley and Timberline resorts and she recently shared some insight into the fact that David Lesher of Canaan Weather recently stated that the first nine days of January this year have been the snowiest in the past 66 years!

We may not see an annual snowfall record for the WV mountains broken this season or anytime soon as the most snow on record in WV was 301.4 inches, set at the Kumbrabow NWS COOP site during the 1959-60 winter. However, for all of you who thought LAST season as snowy as hell, check this out:

As Susan Moore points out, "We have some of the best cross country and downhill ski conditions in recent memory! At the Bright Morning Inn in Davis we’ve been shoveling, scraping and plowing, and then doing it all over again…to prepare for guests. The inn is mostly filled on weekends this month, but plenty of mid-week slots are open. If you haven’t tried mid-week x-c skiing at Whitegrass or Blackwater Falls you’re missing out on a pleasure mostly known to locals: peaceful woodland trails and a solitude that is sublime. And if you’re a downhill skier at Timberline or Canaan, midweek offers that rarest of benefits: non-existent lift lines."

You guys heard her. Check her great place out at www.BrightMorningInn.com  and tell her that you heard about her cool place at SkiSoutheast.com. If you’re headed to Canaan Valley Resort also check out "Hellbender Burritos". You can thank me later.

One anonymous local emailed me this morning that they had hit up Hawksnest this morning. They reported some amazing snow on the edges of Goshawk and The Right Stuff this morning. The problem with that report is that Hawksnest is no longer a ski resort! You guys! They wrote that they really were bummed after skiing the mountain this morning because they’d forgotten how much they loved the old ski area. Ditto that my friends. Ditto that. Man I have SO MANY great memories hitting up that place…especially til 4am in the morning. It sure would be great if someone came along and bought that place and made it into something special. Brad Moretz, are you reading this? Gunther? Come to think of it, how cool would it be for Sugar to offer a ski pass that allowed you to ski both ridges. Hawksnest is literally right across the highway from Sugar! Two mountains. One lift pass! Okay, I’ll stop dreaming now.

By the way for those of you reading this and dreaming of hitting up Hawksnest or any other closed terrain – that is illegal. It’s called "poaching" and it is not recommended unless you’re itching to rid yourself of some cash and perhaps a few hours of local jail time.

Previous Post
Lots of Snow Makes for a Great MLK Weekend Skiing in NC!!
Next Post
A View from the Top of Appalachian Ski Mountain from this Week! Click to enlarge for more detail!