The best way to sum up the day is simply that it was the best day on the slopes of the trip. It began with a light sprinkle that literally might have dropped three drops of rain on me. However, evidently it had rained slightly prior to the daylight hours and that softened up the snow (remember it has been in the single digits for weeks here) and that made for some phenomenal conditions all day. The only downer on the day was the fact that it was so foggy on the north side of the mountain that you truly could not see just 15 yards ahead of you. Although the black trails at Mont Tremblant are more like some of the blues I’ve hit at many mountains, you STILL need to see more than 10-15 yards ahead of you when you’re skiing or riding.

However, another good thing about Tremblant is that there are two sides of the mountain. We skipped over to the south side and voila, no clouds, no fog. It was nearly perfect. Also I guess the threat of inclement weather must have scared off a lot of people because the slopes were MUCH less crowded on Friday. Lift lines were never more than five minutes with most less than a minute.

We were on the slopes quite a bit and then went in for a late lunch (3:30pm) and ate at a great restaurant that was slopeside at the base of the mountain’s village side. La Forge offered some great eats and drinks for my party of five. The ticket? $174.00. I’m telling you this place ain’t cheap.

Just prior to exiting the restaurant I had sent my teenager out to find her uncle so that we could look around the village. However as I left I saw that she had been picked along with another of our group (from hundreds in the crowd) to go onstage at a pre-New Year’s Eve celebration. She played a cool scavenger hunt game for items from the crowd and won first place. We had a ball, dancing along with thousands down through the village streets. Tremblant knows how to celebrate the advent of a New Year!

Afterward we went into the town of Mont Tremblant and did a little grocery shopping. I have to tell you that I WISH our grocery stores in the states were more like these here. I remember back in the day as my mom used to take us to the stores where there would be open breads, fruits and huge assortments of non-commercial products. The grocery stores here are more like MARKETS and it was a bit of fun and entertainment just shopping for wine, beers and snacks.

So we had yet another good day of skiing, some fun celebrating the New Year’s Eve festivities and then crashed for the evening soon after midnight as we’re headed out for some dogsledding Saturday morning.

Here’s some comments from each day of the trip…

Nice view down towards the Village and Lake Tremblant below: 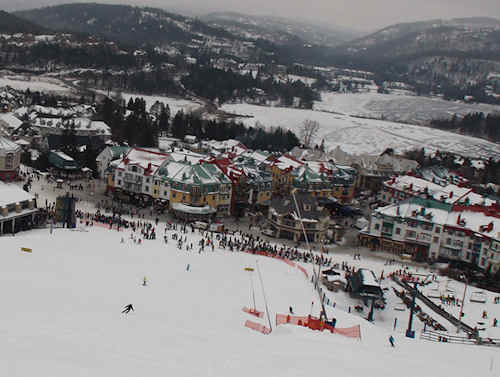 Dakota Bauer of Sugar Mountain and Carrigan Doble of Banner Elk are among the celebration
for New Year’s Eve. 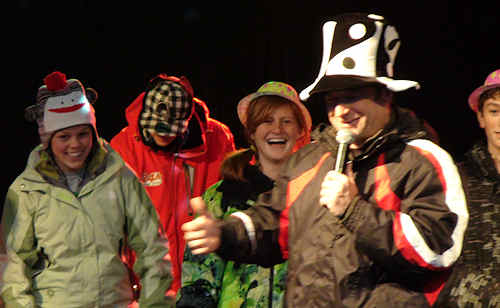 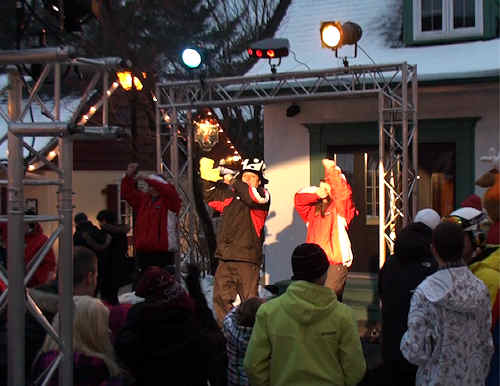 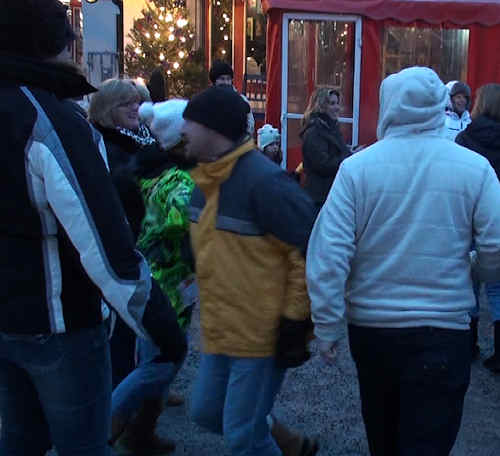