If you missed previous "blogisodes" you can find the links at the bottom of today’s story to catch up.

Wednesday was the best day for skiing and snowboarding of our trip thus far. We thought that we were going to get a great, early start with some First Tracks that we received as a "gift" upon check in. I’ve learned a lot of things thus far in Canada, but I have something to teach them. It ISN’T First Tracks when everybody at the resort has them. In Christmas holiday trips to Snowshoe over the years we’ve learned that we could hit the mountain early (at 9am) and get in several turns down the mountain before the crowds hit the mountain. Often we’d get in four or five trips down or more with NO lift lines.

So with these VERY SPECIAL "First Tracks" lifties that they provided us at check in, we could hit the mountain at 7:45am. We figured we’d have three hours or so of uncrowded slopes.

Some of our crew hit the mountain at about 8:20 or so and when we got to the top of the mountain it was as crowded as it had been around noon the day before. So much for our "First Tracks". We MIGHT have been one of the first couple of thousand tracks.

However we made the best of it and skied for an hour or so and then came in for some breakfast. After chilling for a couple of hours we headed back out and remarkably the slopes were FAR less crowded. It had snowed all day and at that point the conditions were the best that we’d experienced to date. There were STILL a number of scraped/ice areas, but all in all good conditions. We hit the mountain for a few hours before making our way to the north side of the mountain (to be close to our lodging in time for lift closings).

A few of our crew went in a different direction to board the gondola for another trip up and down, while a couple of us headed to the condo. Apparently there’s an occurence that takes place everyday at Mont Tremblent. It’s sort of a "feeding frenzy" where the resort closes that lift while dozens or more people are still in line. Apparently the gates squeeze closer and closer until at some point they close up entirely – regardless of how many people are in line at the bottom. On this particular day there were tons of disgruntled people screaming/begging to be allowed another ride to the top…so they could get to their lodging without taking the shuttle. The begging fell on deaf ears. While THAT is understandable, it seems a better solution would be to setup a stop-gap some distance away from the bottom BEFORE they made it to the lift. Of course that would probably just move the screaming and begging throng further back. Not sure how you’d solve that issue, but it was something we hadn’t seen before.

Keeping with my theme of things I’ve learned about Canada, here’s another. In a land covered in ICE, I’ve yet to see a drink of coke, tea or any other kind of cold drink with more than two cubes in it. I’ve even asked for extra ice to be served with a drink and I think I got maybe three cubes in it.

I should mention before closing for the evening that the main village here at Mont Tremblant IS awesome, beautiful, extravagant, and whatever other adjective you wish to insert. Around every corner and at nearly every other storefront there are bars and grills and eateries of all shapes, sizes and delicacies. I can’t overstate just how impressive the village is. You get the feel of a European village with narrow streets and a rainbow of color rising up from both sides of the street. It is truly a vacation destination all it’s own.

I have to relate one last tidbit of information. I was skiing down one of my last turns of the day and something caught my ski and literally pulled the brake on my left ski sending me head over heels – landing hard on my left hip. I got up immediately and clicked my ski on and started down the icy piste that leads to Le Plateau (our lodging). I immediately noticed that my left ski was rooster-tailing snow as it grabbed the ice, which of course sent my right ski moving faster than I would have liked. The brake was broken. I clicked out and tried to fix it…but no dice. So that left me skiing down the rest of the icy pitch on one ski that didn’t want to go and one ski that was wanting to slide too much. Obviously that isn’t the ideal way to make it down a trail but most skiers at one time or another will be faced with that challenge.

So that episode took me to another funny occurence. Before going out to eat I decided to take my ski over to one of the repair shops at the village. I wished I would have gotten the guy’s name but he was a pretty cool guy who said he’d worked at Tremblant for 13 years in the ski shop during the winters and repairing bikes during the summer months. He took my ski back, fixed it and then came up front and asked me if I had one of my boots with me. I replied, "No" but then mentioned that I could bring it the next morning for him to fit. In the kind of dry wit way that we’ve seen a lot of he remarked, "No I’ll be asleep."

I must have looked confused because he added in a deeply French accent, "Someone else will do eeeaaattt.!"

There is a cool, laid back vibe here. I kind of like it…when I understand it.

(By the way I DIDN’T invent the word "blogisode". Man I was sure of it! One of these days I’ll invent a word. My brother actually invented one of the coolest words I’ve heard of. You know the smell that you get the moment that you open a new bag of snacks? He coined the word "snackmosphere". Oh well, one of these days.) 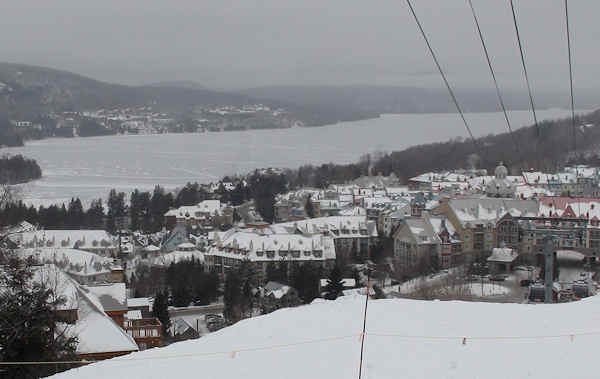 It’s a bit dark but the atmosphere in Tremblant Village is very cool! 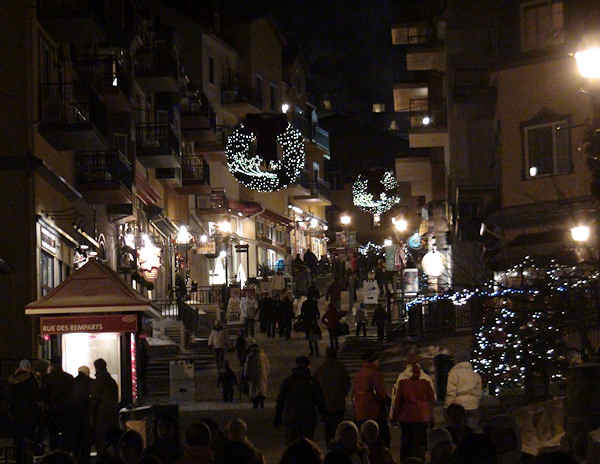 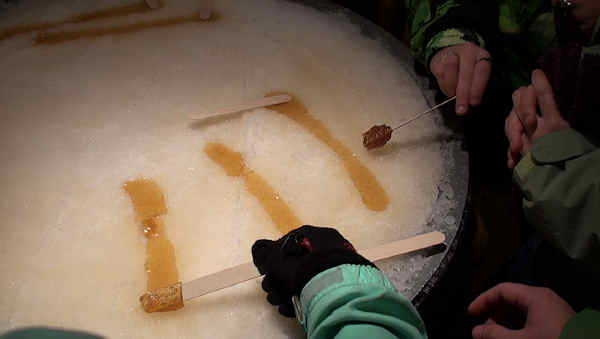 This is the piste trail just two steps from our back deck to the bottom of the mountain. 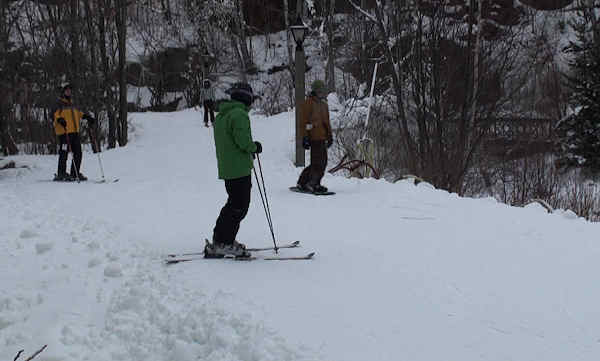 This "character" stepped in front of another village photo 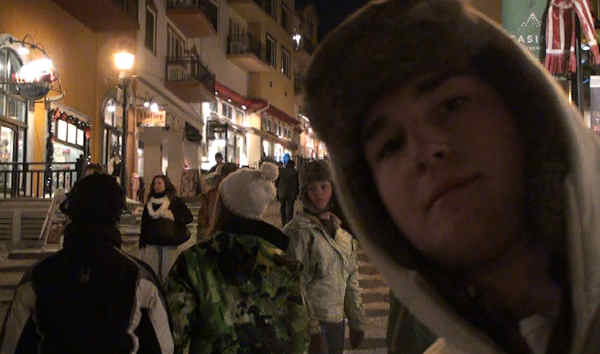 An unobscured village shot…the Village goes on and on.. 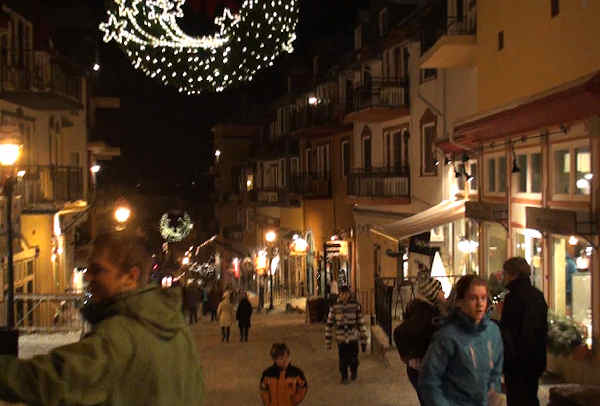 Carrigan doing the maple syrup thing for $2 Canadian…which on this night was $2 American. 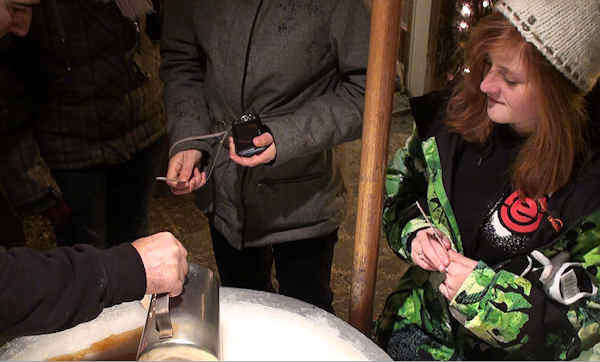 Previous Post
Weather Forecast for the Mountains Looks Somewhat Wet
Next Post
The Last Day of the Year Will be the Mildest of December! Cold ahead!