Today was an great day to take in the slopes here in Mont Tremblant. The newly tuned up skis and snowboards (see yesterday’s blog) really made a difference in handling the conditions better. So did the fact that we experienced a virtual heatwave here in Quebec on Thursday. The temp rose to 27° today. That softened the snow and prompted us to grill outdoors. That’s what Canadians do when it’s hot outside. I’m obviously joking a bit however only kind of. We went horseback riding today and one of the guides who was a 20 year old girl stated, "You chose a great day to come. The best day in fact as it was hot and sunny."

That’s exactly what she said. Of course 27° felt like a heat wave compared to the near zero degree temps of the last few days.

It was kind of a chill day today as we lounged around, which will always make for a good day…and after the "equitation" (horseback riding) as they say it here, we hit the village for some light eats. However back to the equitation…

When we were signing up for the activity, we noticed that the promotional material claimed we’d see deer (we did see three or four) and it also mentioned "Bison sightings". Okay TECHNICALLY we DID have some Bison sightings, but they were in a fenced in area. Not exactly the natural habitat kind of sighting we all imagined. The equitation that we enjoyed was done well and the two guides did a great job of keeping us entertained, although we had a ton of laughs from some in our group who were obviously a little timid about every move the horses made. The ranch had 90 or so horses and we enjoyed the ride through the forest. In fact, we rode a trail today that had just been cut the day before. Talk about trailblazing…

We are taking in some dogsledding on Saturday that is meant to provide some Bison Sightings as well. Hopefully it isn’t the same penned in beasts. We’ll see.

We also took a side trip – which is ALWAYS recommended when you’re vacationing – into the old town/village of Tremblant. We stopped for dinner and drinks at an old Irish Pub, but it was unfortunately under repair. Driving a bit further we came up on the Federal Docks of Lake Tremblant and there were dozens of people walking across the completely frozen over lake and some were playing hockey, etc.

After a few days of non-stop fun and horseback riding, etc…we hit the vacation rental at 6pm and we’re ALL rather "spent". 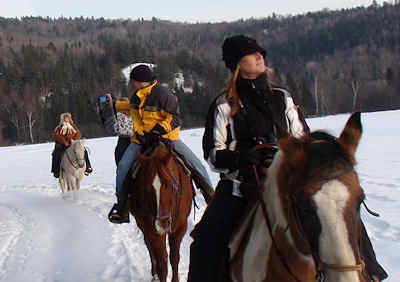 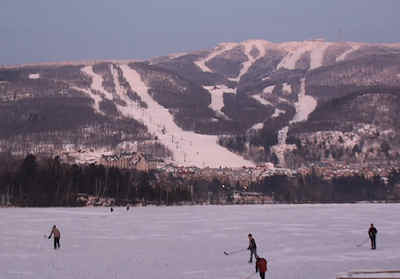 Night was coming on and the lights of Tremblant looked pretty 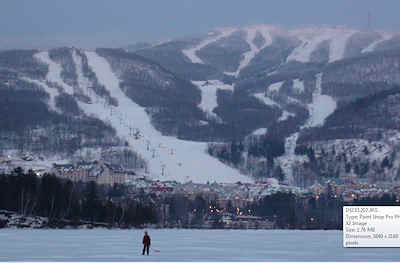 Previous Post
A Dry New Year’s Eve; Wet New Year’s Day and then Cold and Snow Returns!
Next Post
Happy New Year! Torchlight parades, fireworks, we had it all! This shot is compliments of Appalachian Ski Mountain from last season!