ALL NORTH CAROLINA SKI AREAS BURIED UNDER POWDER THIS WEEK!!

Moral of the Storm? Lots of snow from this one folks. Today is Thursday (wahoo, tomorrow’s Friday) and it has snowed everyday this week at some ski areas! I heard a crazy statistic on NPR this morning, and some of you may already be aware, but I’m going to share it with you anyway…49 out of the 50 great United States of America have some snow, somewhere. Even Hawaii has snow. Florida, the appropriately named "Sunshine State" is the lone state that does not have any snow. I thought that was pretty wild. I know that the states we cover have certainly gotten their fair share of snow over the last couple weeks, as one storm has blasted in right after the other.

Laura Parquette, Communications Diva at Snowshoe Mountain, sent us this press release late yesterday afternoon and I’d like to share it with you. Basically, if you were/are thinking of hitting up the Shoe for Martin Luther King Weekend, you’re in store for some seriously great conditions…

SNOWSHOE MOUNTAIN ENJOYS MORE THAN A FOOT OF FRESH POWDER!
The winter storm that is rocking the East Coast has made for great ski
conditions in West Virginia

(Snowshoe, WV) While a massive winter storm is causing headaches up and down the East Coast, those lucky enough to be at Snowshoe Mountain Resort are reveling in the nearly foot and a half of snow that has fallen since late Tuesday. The West Virginia resort is treating skiers and snowboarders to powder conditions most often found out West. Since December 1, Snowshoe has seen nearly 90" of natural snowfall-the resort averages 180" annually-and more snow is expected on Thursday.

Snow began falling during the evening hours on Tuesday, and the resort awakened to 11" of new snow on Wednesday morning. By mid-afternoon Wednesday an additional 6" had fallen. The National Weather Service is predicting snow to continue in the Snowshoe area through Thursday, with as much as another foot of snow expected to fall. Snowshoe offers the region’s most available terrain, and skiers and riders are enjoying the snow on a playground of more than 200 skiable acres this week. The resort plans to be 100% open with 60 trails for the upcoming Holiday
weekend.

Martin Luther King weekend is typically one of the busiest of the year at ski resorts across the country, and the new snow at Snowshoe will only add to the experience for the thousands of enthusiastic skiers and riders who will descend on the resort. For those planning on driving to
the resort on Thursday or Friday, road crews are busy plowing and sanding the area roads and no long-term delays have been reported. Snow has ceased in most areas of the southeast, and should taper off Thursday night over the West Virginia mountains.

And now that our beloved SkiNC/SkiSoutheast Messageboard is back up, I would like share a Trip Report with the masses that is from Snowshoe. You’ve heard what the Resort has to say, now here are a few photos/words from a member of the "fam," Messageboard member BrookBarrel (Carl Brookman)…

It dumped last night. At least a foot of fresh on the 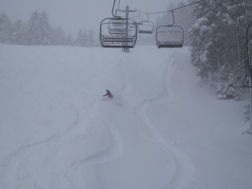 slopes for first tracks with some crazy wind loading at least double that in places.High winds + poor visibility at the top of the lifts but everything was fine once you got down into the tree line. The hooter was running at 1/2 speed due to high winds. Wish I had more/better pics but was too busy enjoying myself.


<<< This girl rides powder better than most guys I see on the mtn. Look closely to her left and my previous line is visible. 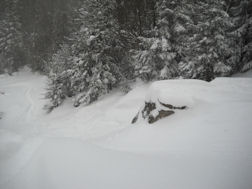 <<< After the slopes were tracked a few cuts in /out of the trees were had then I headed to some fun rock drops to send it into the soft .

Theses are just a couple of the photos, if you’d like to check out the entire TR and look at these photos larger and see a few more shots showing the gnar-gnar pow-pow at Snowshoe yesterday!

Let’s get down to business, shall we?

Beech Mountain – 5.3°- Beech is buried under an additional 6.1 inches of snow. Since January 1 Beech has gotten 36.2 inches of snow, that’s not even two weeks folks, and it has snowed all but three days since the new year. Beech has surpassed the 100 inch mark for the season and sits at 101.2 inches!! They are open with POWDER conditions on 100% of the Mountain! Beech offers $15 lifts tickets/$15 ski rental (day session) to students and teachers out of school due to snow!!

Cataloochee – 11°- Open today for both the day and night sessions for skiing and riding on 16 of 16 slopes and trails. With just under an inch of new snow, Cataloocheee’s packed powder surface conditions are excellent!! Almost 2 feet of snow (22.9 inches) has fallen at Cataloochee since we broke in to 2011!! Tube World is back open today with tons of new snow at 4pm!

Sugar Mountain – 10°- Sugar is open today with 20 of 20 slopes and trails! Another 4.8 inches of snow fell at Sugar in the last 24 hours. This season they are up to 83.9 inches. Since January 1st Sugar Mountain has seen 29.2 inches of snowfall. Frostbite Warning at Sugar means hat and gloves are required!!

Wolf Ridge Resort – 17°- The CoCoRahs reporter down at Wolf Ridge Resort is reporting this highest 24 hour snowfall of the North Carolina ski areas. With 8 new inches, Wolf Ridge is nothing but powder! They area open for skiing and riding from 9am-10pm! Since the start of the new year the Wolf has seen 32.6 icnhes of snow! They are now at 88.6 inches for this season! Wolf Ridge also offers snowday rates/specials for students and teachers and tubing is open!!

Bryce Resort – 25°- Open today for skiing and riding for both day and night sessions on 7 slopes! The surface is groomed and ready for shredding! Tubing is open later today!

Massanutten – 18°- Open today for skiing and riding on 100% of the mountain! Today they are open from 9am-9pm. The Tubing Park will also be open today from 9am-9pm. Conditions are looking great despite lack of natural snowfall.

Wintergreen – 16.7°- Open today on almost the entire mountain with 25 of 26 slopes and trails! Wintergreen is open for skiing and riding from 9am-9pm and the average snowbase is about 40-60 inches! The Plunge Tubing Park will re-open this afternoon at 4pm. Ridgely’s Fun Park will be one Saturday, Sunday, and MLK Monday!!

Canaan Valley – 7°- MORE POWDER!! Canaan is sitting on about 8.2 inches of new snow!!! Canaan is open from 9am-4:30pm today for skiing and riding on 36 trails. All slopes and trails WILL BE OPEN this weekend!! Canaan has gotten 115.7 inches of snow this year and we’re not even halfway through January. The conditions don’t get any better! Look for great midweek specials!!

Snowshoe Mountain – 7°- POW-POW-POWDER RUNS (sing that to the tune of the Power Wheels Jingle circa 1990-ish)!!! Another 7 inches added to yesteday’s 11 means 18 inches of powder at Snowshoe in just 2 days. They’re up to nearly 100 inches this season!! There is plenty of snow for everyone to enjoy, and MLK is shaping up to be epic! Snowshoe is open on 56 slopes and trails with 12 lifts running, tubing will open today at 1pm!! If you were hesitating on making a trip to WV this weekend, stop thinking and get up there for amazing skiing and riding!!!

Timberline Resort – 7°- Did someone say POWDER? Timberline has over 8 inches of new snow today, and almost 116 inches this season! Timberline will be open for day AND night skiing and riding today on 38 of 39 slopes and trails!!

Winterplace Resort – 14°- Open today on 25 of 28 slopes and trails with 6 of 9 lifts running for day and night skiing and riding with tons of new snow!! Wood’s Run will be closed today for snowmaking and plans are to open Turkey Chute this weekend!! With 8 inches of new snow there is powder all over the mountain!! Both Terrain Parks are open and the largest Snowtubing Park in WV is also open!!

Wisp Resort – 17°- Open today on 100% of the mountain for skiing and riding! The Front Side is open from 9am-9pm, East Ridge is open from 9am-8:45pm, and North Camp is open from 9am-4:15pm. With 4 new inches of snow and over a foot in the last two days, conditions in Maryland are AWESOME! If skiing and riding aren’t your thing there are tons of other fun activities at Wisp…check out the Mountain Coaster, hit up the Bear Clas Snowtubing Park, or do some ice skating!! Wisp also offers some midweek specials so be sure to check those out!

Ober Gatlinburg – 22°- Flurries are in the air and snowmaking ops are fired up at Ober! They are open for skiing and riding on 100% of the mountain from noon-10pm! Grizzly closes at dusk! Be sure to check out all of the other fun stuff going on at Ober, including tubing!

Previous Post
APPALACHIAN MOUNTAINS get pounded by NOR’Easter!!
Next Post
Lots of Snow Makes for a Great MLK Weekend Skiing in NC!!