A Little Grass, but Lots of Grins! 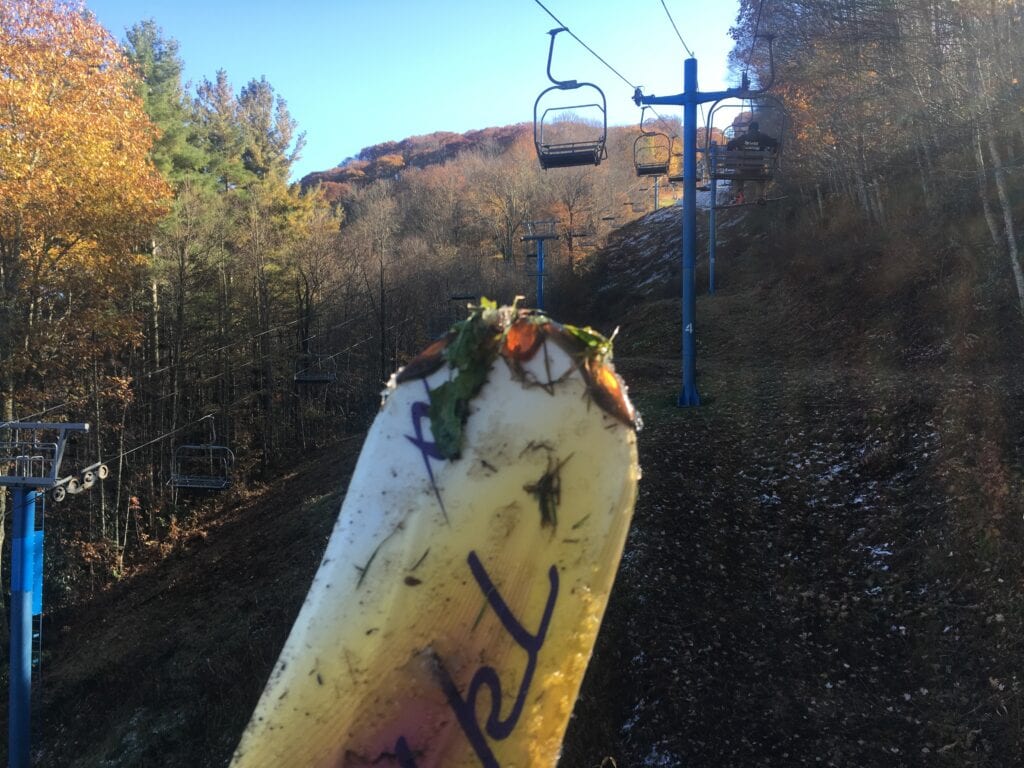 Usually the prep for the first day of skiing feels like a bad case of Alzheimers, with the excitement of Christmas morning. Picking through the closet to find some dusty ski gear that I swore put in this exact spot. I HAD better intentions of tuning my equip., and prepping the night before. I slap on some rub-on wax and call it good . . . I’m going skiing TODAY!!!

The ONLY thing I care about on the drive up there is that my cold boots get nestled up to the warm air from the passenger foot well. Sorry ski-bum hitchhikers . . . you’ll have to ride in the windy truck bed.

Like an old friend you meet up with once a year, it’s good to see a place that feels like home. These ski areas/resorts in the southeast have CHARACTER. I saddle-up on the lift for the first time, and feel justified in getting in a warm up run on EASY WAY. The coverage was surprisingly good and considered lapping it a couple more times, but decided to move on to bigger and better things . . . LOWER O was calling my name.

I lapped lower mountain the rest of the day. This consisted of some good coverage up top, that turned into a little grass skiing into a pond skim toward the bottom of every run . . . I’ll take it! Sheesh, it’s November 9th . . . #AUTUMNSKIING 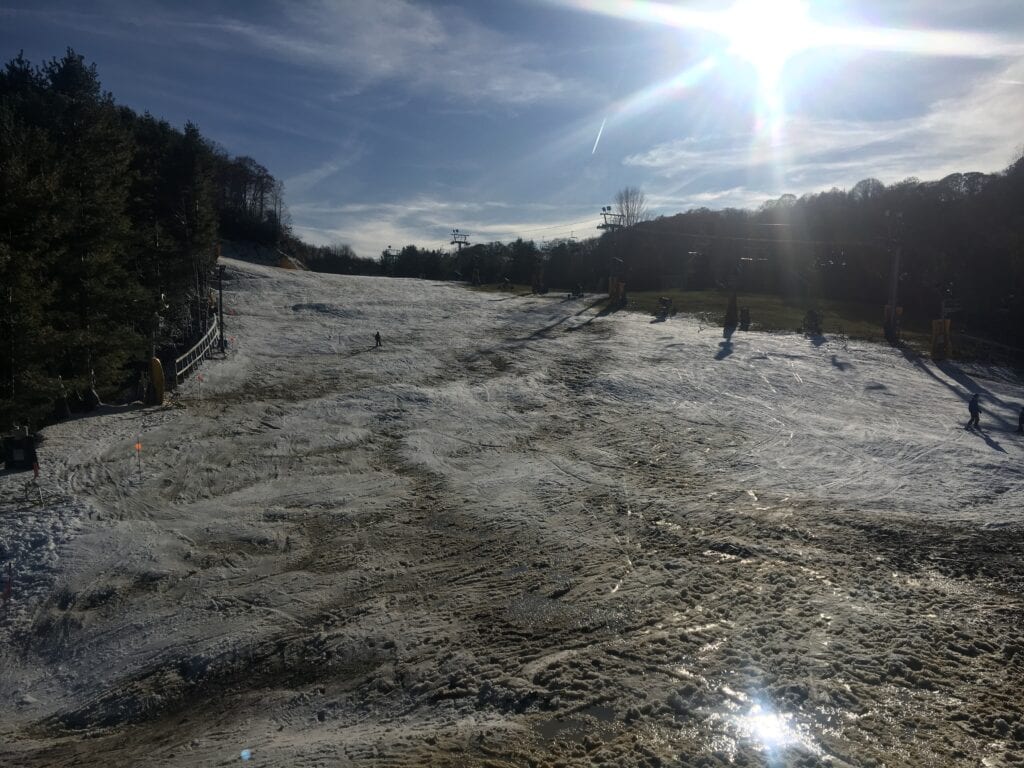 Do you want a slushy with those french fries? Click to Enlarge!

I wake up on Day 2 with my legs feeling like I’d just done some CrossFit in the gym. At 38, I know the slippery slope of recovery between sessions will eventually get the best of me. My twenty year dreams of being a pro-skier are like the setting sun. No bother . . . I try to outsmart the body and decide to SNOWBOARD today!!!

Pulling up to Sugar, I’m thankful the snow-guns weren’t on. I like snow and everything, but I don’t know anyone who likes being pelted by sub-freezing mist . . . I’m fine with you calling me a fair weather rider. I darted to the new EASY STREET lift and enjoyed the ride to mid-mountain . . . Nice, fast lift that feels smoother than a Cadillac.

The rest of the day was spent from the top-down. Coverage was not bad, but by 11am or so, some bare spots had worn through. Sheesh, it’s November 10th and I’ve already gotten TWO days in this year! 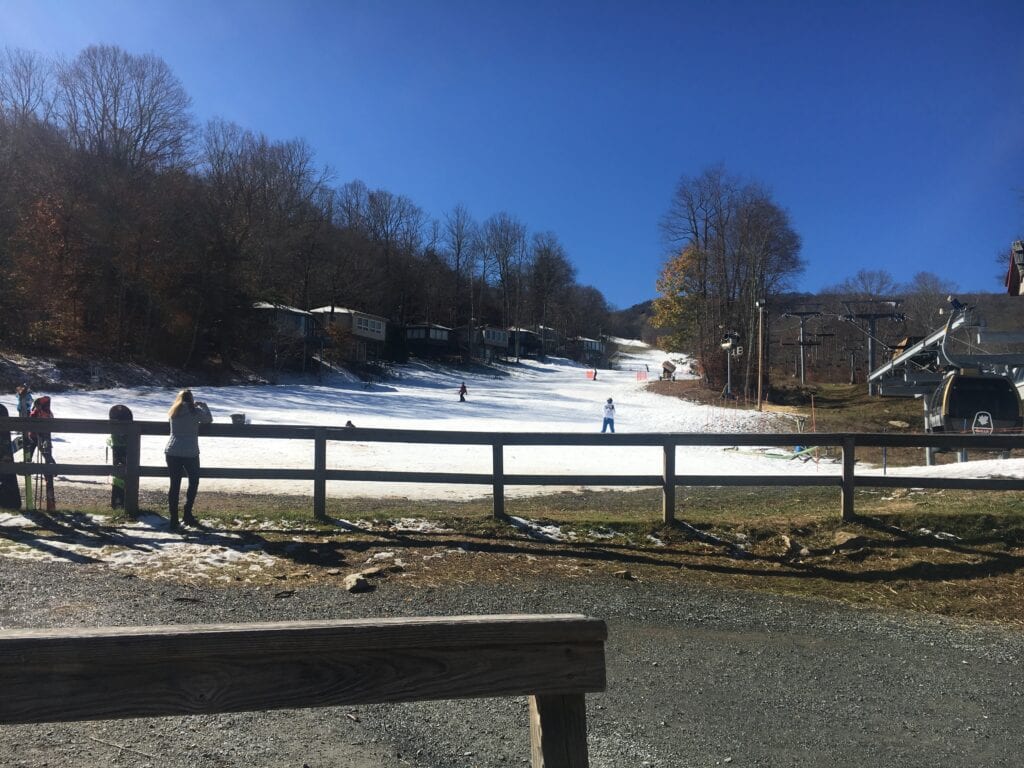 Day 2.5 – Warren Miller’s Timeless (it doesn’t quite count as a day of skiing, unless you’re actually in the film) 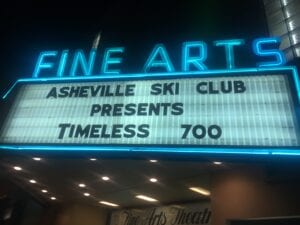 Not everyday you see this in downtown

Yesterday, I went to the movie premiere of Warren Miller’s Timeless. Holy smokes! . . . this was the 70th annual Warren Miller Film, and it was a sold out theater . . . ski films are alive and well. The places they film in are dreamy. In addition, there’s something about (cool) Johnny Mosley’s narration that gets me every time. I loved the parting line at the end of the film . . . “Winter Begins, Now!” 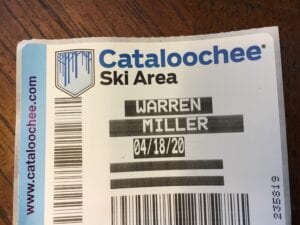 I might just frame this one, after use . . . thanks for the yearly inspiration Warren Miller!

A big thanks to Cataloochee for the comp lift ticket with the purchase of film ticket!