A Little Bit of Snow to Start the Weekend 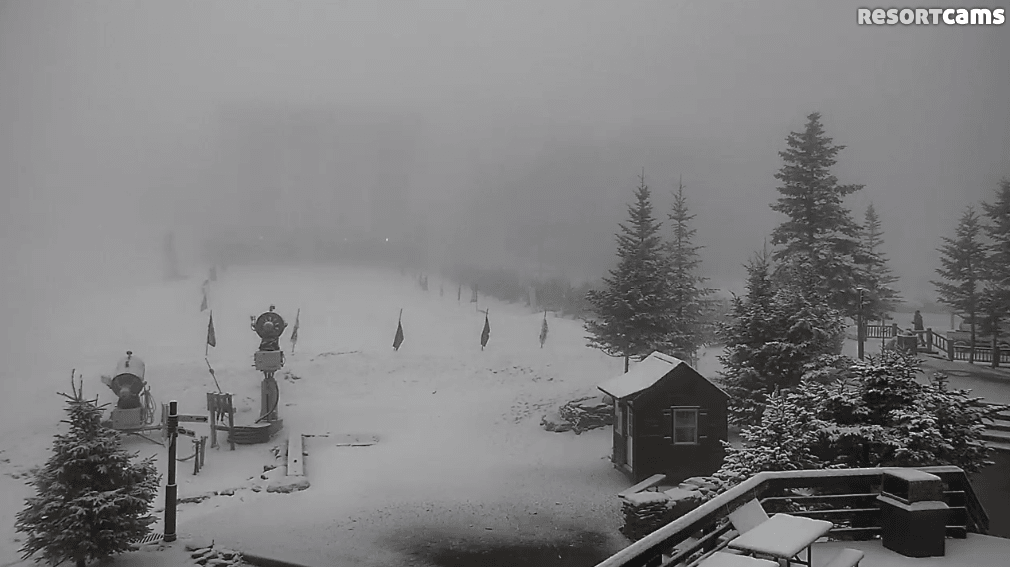 Friday is here!  Woohoo!  On one hand, I’m excited because the work week is almost over.  On other hand, it means we’re that much closer to seeing the end of the ski and snowboard season here in the Southeast.  On this time come Monday, only Snowshoe will be open.  Everyone else will be done, except for App who will be open next weekend.

We do have a little bit of snow to talk about this morning.  And a lot of colder temperatures.  It’s pretty drastic how much colder it is this morning compared to earlier this week.  I actually turned my heat on this morning.  It’s been on cool for a while now.

The remaining 5 open resorts are in the 20’s and lower 30’s for the most part this morning  Yesterday morning it was about 20 degrees warmer than that.  Today is going to be balmy compared to tomorrow though when highs likely won’t get above freezing for several resorts.  Late March you say?

Precipitation started out as rain overnight and it was heavy-ish at times.  In and around the Boone area in North Carolina it looks like the general consensus is around the quarter inch mark.  It has changed over to snow this morning though and App and Sugar are seeing some snow showers this AM.  Only a trace or so has accumulated, but it’s still nice to see.  Check out the screengrab from the App cam just now.  It dumped for a couple of minutes.

It ended just as quickly as it started but it was a nice way to wake up.

Up in West Virginia, the rain changed over much quicker.  Snowshoe is reporting 2″ of fresh snow this morning.  Check out the Shaver’s Centre cam shot from just a few moments ago.

Check out the mini-pillows on the benches!

That’s definitely a legit couple of inches of snow based on what I see on the benches and the railings of the patio.  It should be a funnnnnn day up there today, even with what looks like a lot of fog.

Get out and enjoy this weekend of skiing and snowboarding if you can.  The weather is certainly going to cooperate and it won’t feel like a final weekend.  Colder temps and a little bit of snow should make for some fun turns.  I might be out at App on Sunday.  I really want to ride my new Brackish board some more before the season is over.  If you see me, say hey!

Appalachian Ski Mountain: They are open through Sunday, opening back up next weekend, and skiing and riding on a 40-64″ base for day and night sessions.  All 12 slopes are open with two terrain parks.  Their Meltdown Games are this weekend and that should be a good time with plenty of festivities going on.

Sugar Mountain: Old Shug is open through Sunday on a 12-44″ base with 10 slopes.  They’ll be having their traditional burning of the snow ceremoney on Sunday to close the season.

The Homestead: The Virginia resort closes on Sunday and currently have a 30″ base with 5 trails open and 2 lifts operating.  They will continue to offer a $30 lift ticket and ski/snowboard rental deal through the weekend.

Snowshoe Mountain: The Shoe will remain open next week and won’t close until next Sunday, April 5th.  The fresh snow this morning combined with the fact that they have 36 trails open still and a 36-60″ base will make for a great weekend up there.  They’re killing it as usual.

Winterplace just made the call and pulled the plug on the season.  They had been closed all week and were possibly going to open up for one final weekend, but they just posted on their site that last Sunday was indeed their final day.  Bummer!

Well, that’s it for me.  I’m not sure what the First Trax schedule is going to be for next week.  Only Snowshoe will be open so we might be on an abbreviated schedule.  I’ll have to ask Mike today and see what he wants to do.  Regardless, he’ll be with you tomorrow and Sunday.

Everyone enjoy your weekend though and make sure to get out and ride!