A Good Show on the Snow

On a long lonesome ski slope, east of Foscoe, you can listen to the chairlift moanin’ out its one note song.  You can think about the powder, or the trails you skied the time before. But your thoughts will soon be wandering the way they always do.  When you’re ridin’ sixteen weekends and there’s pond skimming to do.  And you don’t feel much like sinkin’, you just wish to make it through… 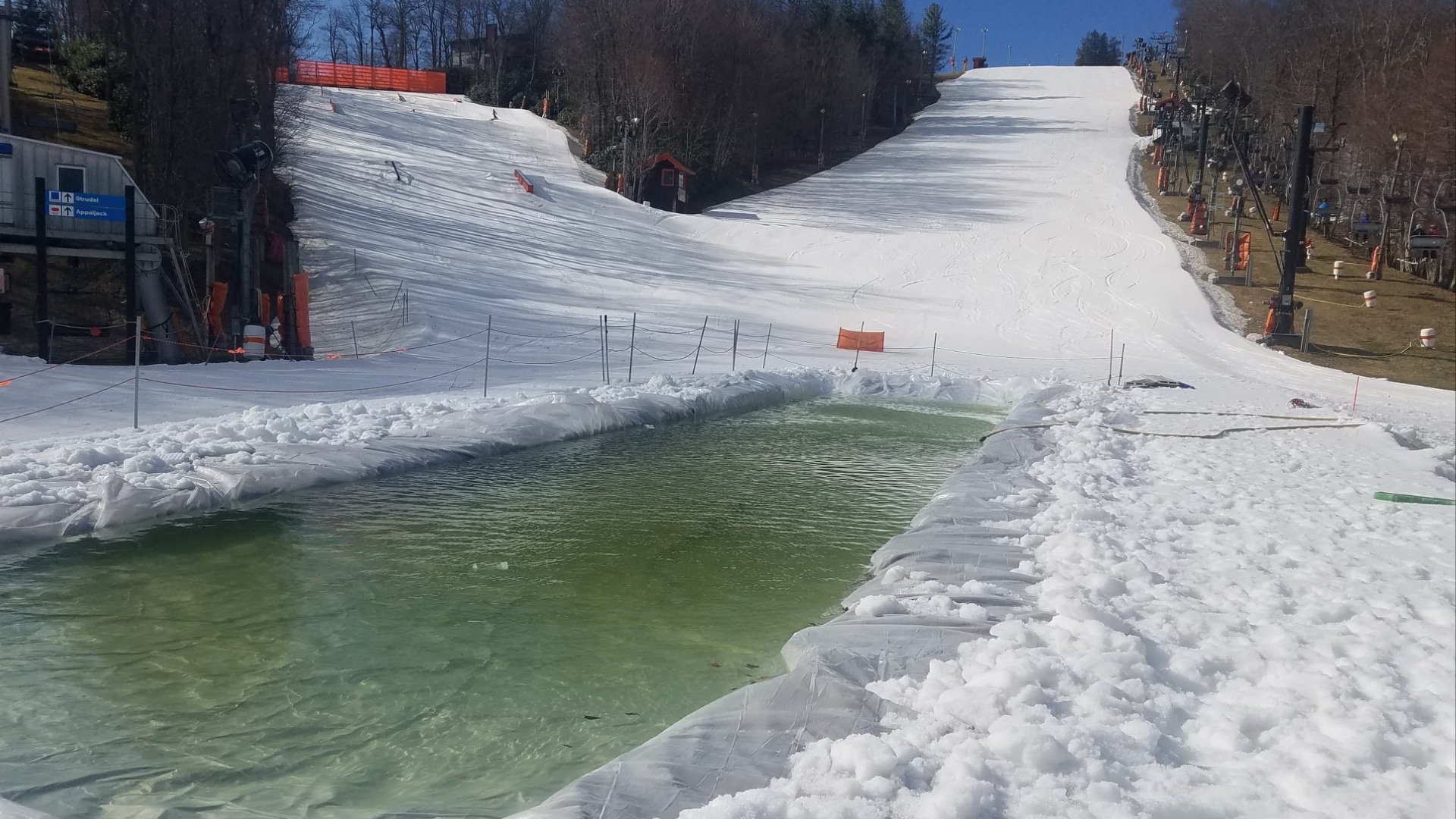 Hello skiers and riders of the southeast.

Whenever a ski season wraps up the tune of our attitudes shifts somewhat.  There is a slight change in our rhythm and style.  We go about it at a different beat than before, and in most cases, it becomes wilder and weirder.  This year is no exception as the 2021-2022 chapter of our skiing and riding history book is concluding right now.  There I go, turn the page.

No need to fret though.  This moment of the season provides plenty of opportunities to make a splash on the way out. Fortunately, a lot of you rocked out to that notion and morphed into celebrity like figures because of it.  I was lucky enough to go to Appalachian Ski Mountain, which is adjacent to the Blue Ridge Parkway in between the towns of Blowing Rock and Boone, this past Sunday with a goal to witness and participate in this concert of chaos.  I was not alone in the moment, and I hope for is that I shaved the snow beard into an appropriate fashion for the occasion. Before I dip into the festive details, I must say that the spring-like conditions were fantastic.  There was plenty of slope coverage with zero ice patches to report, plus a nice soft feeling throughout.  If you like making smooth turns on Slurpee like snow that was not grabby underneath, then this was the place to be.  All day I saw several people conquer this pitch with ease and enjoyment regardless of how windy it was.

If you have never been to Appalachian, please note the following whimsy aspects.  First, they play music on their chairlifts from base to summit.  No need for portable devices or bluetooth enabled speakers here, because we’re jammin’, jammin’, and I hope you like jammin’ too.

Next, there is a solid use of orange and dark brown on their buildings, signs, lift tickets, etc.  You know you are at App simply by looking at how they branded everything in a clean and consistent uniform of color. Finally, their loyal members who ski and ride there constantly will treat everybody with friendliness and respect.  You will not find many groups of this size with this kind of stature.

While that holds true throughout the season, this final weekend was divergent for all that attend.  Appalachian’s annual Meltdown Games was a two-day event in which regular joes like you and I could partake in a variety of events that included rail jam sessions, a cardboard box derby, and a few frenzied downhill races, just to name a few.  Oh, and of course the always popular pond skimming and costume contest.  More on that in a moment… 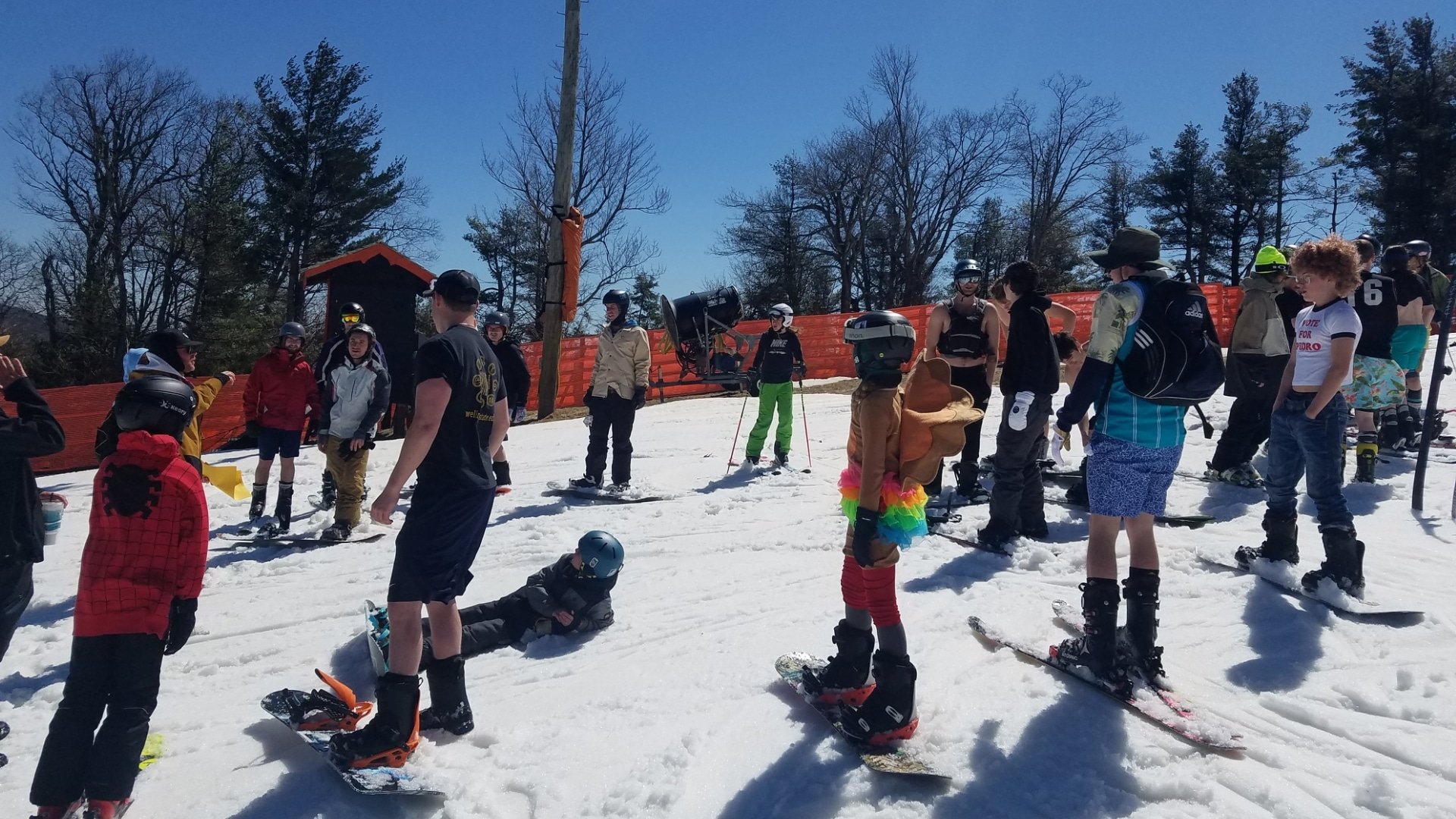 On Sunday while most folks were making laps, they kicked off the High Ollie Contest at 11 AM in front of the base lodge adjacent to the two-seater B-Lift.  The goal of this event is similar to the limbo, but instead one must jump over a bar to advance further.  Limbo higher now… How high can you go?

This was harder than it looked, and it was apparent that the competitors were getting exhausted with each attempt.  How they kept going was remarkable.  For those that are curious, here is a successful jump from second place finisher Brian Hoeh, a North Carolina resident and snowboard enthusiast.

Valiant effort indeed sir.  Well done.  However, a guy named Graham Willis of Lincolnton, NC pulled out the W with a successful 37” leap on this attempt.  Congratulations Graham.

Simply the best. Better than all the rest

That event was a nice appetizer for the audience, but it was the highly anticipated pond skim event that would feed the masses.  For those unfamiliar, this challenge to ski or board across a body of water is a highly entertaining display of wit, skill, and appearance.  The reward for success is staying upright and dry, but not all who tried achieved that task, and instead received a skiing baptism of sorts in a chilly 40-sum degree Fahrenheit pool. Afterall, every rose has its thorn, just like every night has its dawn.

I do not have tabs on how many of the 105 people or so that tried this actually conquered this, but I have some videos of it. So, let’s get to some of the highlights, shall we?

I got a little bit longer, I got a ways to go

Something happens and I’m head over heels

It’s a long way to the top if you wanna rock ‘n’ roll (Skier is Riley Mearns of Granite Falls, NC; Video Credit to Casey Austin of Hudson, NC)

Come as you are, as you were, as I want you to be. Skier is Asher Mearns of Granite Falls, NC; Video Credit to Casey Austin of Hudson, NC)

I was informed that the guys in the last two videos, Riley and Asher Mearnes, are sons of an instructor at the French-Swiss Ski College located at Appalachian, and her name is Angela.  Way to go gents, especially if this was your first attempt ever.  Of course, we must say thank you to Angela and her coworkers for their service to the sport.  If any of our readers’ friends and family are seeking a great place to learn to ski or ride, Appalachian Ski Mountain is very prepared to teach them well.

The pond skim and costume contest by far was the crowd-pleasing event of the weekend.  Hats off to all of you that successfully made it across to the sound of cheers.  Well deserved.

I wasn’t as fortunate sadly, but my takeaway is an image of the horizon tilted incorrectly before I received a head-to-toe submersion of brrrrr! which was immediately followed by a frantic and frigid search for my fedora and sunglasses.  For most people who met a similar fate, they initially sounded like a stunned Ozzie Osbourn when they poppedout of the water.  Uhhhhhh-huhhhhh! Hilarious. 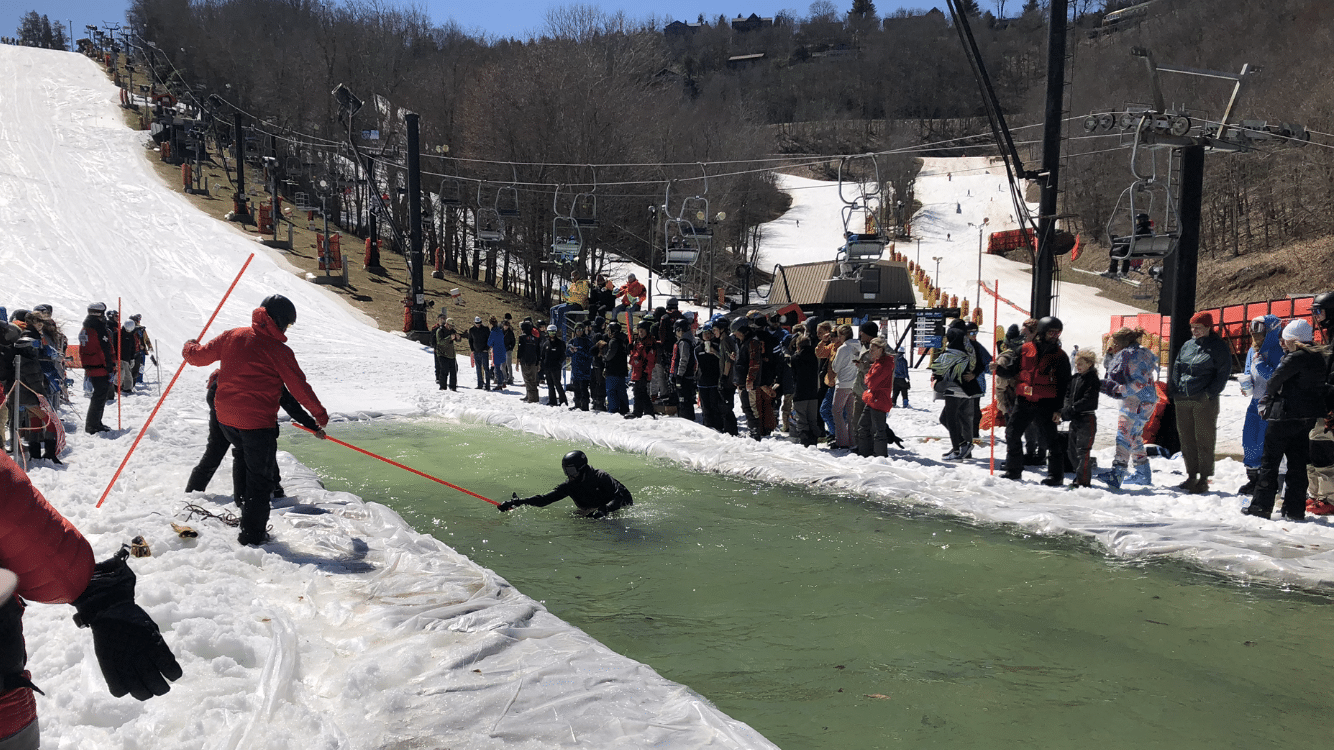 As the day and the season winded down, this place put on one final event called the Chinese Downhill, and it was held at 4 PM.   Essentially, they gathered as many people as they could up top, and then signaled for everyone to bomb down the trail at once in a symbolic mad dash into the offseason. The man in the back said everyone attack, and Big Appal turned into a ballroom blitz.

And with that we come to the end of the season here in the southeast… almost.  We are down to four open resorts which are Beech Mountain, Cataloochee, Sugar Mountain, and Snowshoe.  All signs point to this upcoming weekend being all she wrote for each of them. Hopefully you take advantage while you can because it will be a long pause until we get back to rocking ‘n’ rolling again.  The time is gone, the song is over, thought I’d something more to say.