A Bomb Cyclone of Cold Temps, High Winds and Some Snow for the Ski Resorts 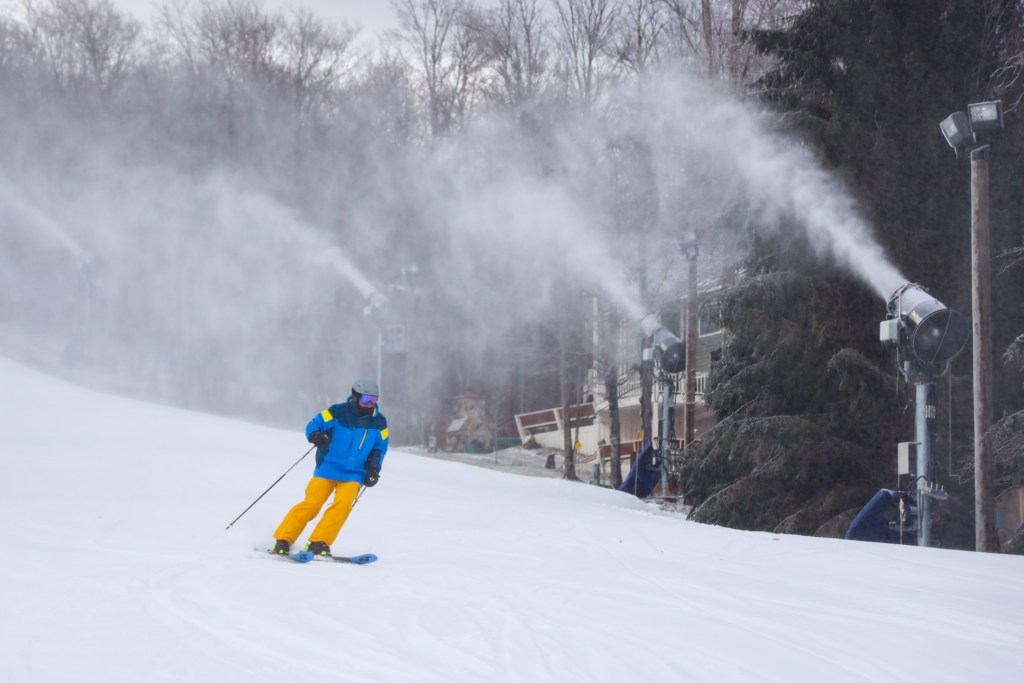 It Isn’t Pretty Out This Morning, So Let’s Talk About the Storm Coming Friday

The photo of the day is from earlier the week and courtesy of Timberline Mountain. Snowmaking will be the focus for all ski resorts in the region.

Temperatures are some 10-15° milder than Wednesday morning at many ski mountain locations. For the most part the temperatures turned out to be a bit milder than forecasted overnight. So the freezing rain has held off so far.

There is a Winter Weather Advisory in effect for much of the area today and tonight. There may be some slick spots on roads and walkways. Please use caution while traveling. Highs today in the low to mid 30’s. Temps will be falling throughout the day to a LOW temps of MINUS 9° tonight at Beech Mountain. Beech’s HIGH on Friday is predicted to be MINUS 4°! You have to look all the way to Wednesday for the temps at Beech to climb to 35°. We could see perhaps 2-3″ of snow along the way tonight and Friday.

BEECH MOUNTAIN FORECAST ACCORDING TO THE NATIONAL WEATHER SERVICE

A look at the NOAA forecast for Davis, WV – home to Canaan Valley Resort and Timberline Mountain shows pretty much the same temperatures with a bit more freezing rain and natural snowfall. Perhaps 4-6″ of natural snow could fall later today, tonight and Friday.

Same basic temperatures with a lot of single digits and below zero conditions. Snowshoe tends to pick up more snow than is usually forecasted, but right now the NWS is sharing 3-4″ of snow possible later today, tonight and Friday.

Spotlighting in on Massanutten, VA, the temperatures will be plenty cold enough beginning Friday and for the next several days to make plenty of manmade snow, although the temperatures are forecasted to be 4-5° “less frigid!”. While we don’t any sub-zero temperatures predicted, we DO see 1-2″ of snow in their forecast. Those snowmaking temps is what all four of the Virginia ski areas are looking for and there’s plenty of that on the way.

So my kneejerk reaction to the news that a “bomb cyclone” was on the way – was “Oh brother, the Weather Channel has come up with ANOTHER ridiculous, graphic description of a weather event.” You know what I mean. A heavy snowstorm has become a “Snowmageddon” and there are plenty of those references.

However, in this case, I guess I jumped the gun. A “bomb cyclone” is the term that actually comes from the American Meteorological Society glossary. It is a short desciptive term for “bombogenesis” – which I ACTUALLY kind of prefer!

Simply put, a bombogenesis means that a storm is intensifying quickly, resulting in more severe impacts than a weaker storm would produce.

Storms like the one headed our way can drop temperatures as much as 40° in a matter of 2-3 hours! Reminds of that movie, “The Day After Tomorrow“!

Too bad this bad boy isn’t going to be a SNOW producer for us, unless God has a hand in wanting to shame the weather experts who think they can’t be fooled anymore.

Editor’s Note: We’ve had SO LITTLE natural snow thus far this season, I am breaking out the billboard we purchased on Hwy 105 up around Tynecastle at Banner Elk. I have already purchased it for a year and will rotate this message along with promoting ResortCams and SkiSoutheast – and my youngest daughter’s real estate website! 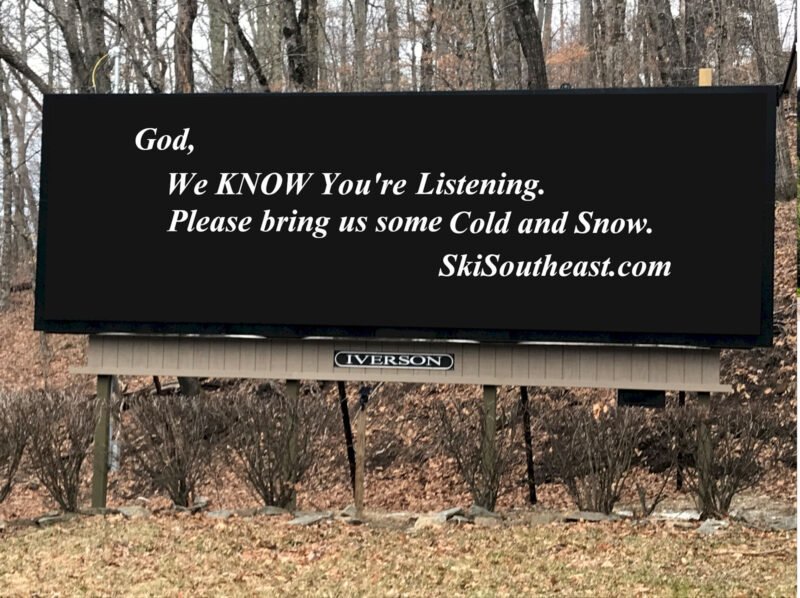 Although our ski areas don’t NEED natural snow to cover the slopes with rideable fun…it sure adds to the ambience, right.

WINDS WILL BE HOWLING…and FROST BITE IS A REAL RISK!

All of the local and regional weather forecasts are warning of dangerous low temps; dangerous high winds; dangerous road conditions and frozen and busted pipes and more. We’re seeing SUSTAINED winds forecasted for tonight and really through Saturday in the 20-30 mph range. Gusts are forecasted to reach the mid 40 mph range and higher, especially at mountaintops.

If you happen to be in a vacation rental unit anywhere in the mountains tonight through the weekend, you might want to put a slow drip on the water pipes to help keep the slow going. If you’re going to brave the slopes tomorrow – pretty much anywhere – MAKE SURE that you are “geared up”. Wear layers and cover all exposed skin.

If you don’t own a balaclava, stop by any local ski shop, on or off the mountain, and buy one. You can thank me later. Make sure your goggles overlap the balaclava and you won’t get the brain freeze.

Also be careful doing anything really strenuous with these conditions, because these kinds of conditions can cause heart issues.

I was speaking with Massanutten Resort’s Kenny Hess this morning. Kenny has held about every title that you could have at Massanutten over the years. He started as a part time lift operator; did some ski patrolling; became the ski patrol director; and is now the Director of Sports and Risk Management with a primary focus on Ski Operations.

He and I were talking about these 40 mph + forecasted winds coming in and he shared, (half joking), “Yea we might have to suspend snowmaking during some of the highest winds, because – even with the perfect temperatures, these kinds of winds can make it counterproductive to make snow. We might have to check with Timberline and see if they can make snow for us!”

(In case you don’t know, Timberline Mountain is in Davis, WV and about 110 miles from Massanutten!)

MORE ON THE WEATHER AND SNOWMAKING PLANS AND CLOSURES 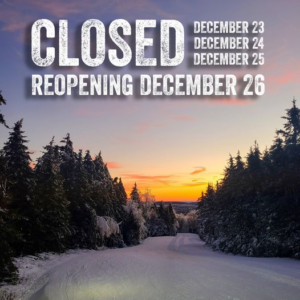 We previously shared that Timberline Mountain made the decision on Wednesday to CLOSE for December 23rd, 24th and 25th. When you look around at all of the other ski areas and see that they will be open, you might question their decision. However, to be honest, it kind of makes sense for the safety of everyone from guests on the mountain to ski ops working it. With power outages VERY possible from these kinds of forecasted, high winds (it is a freaking BOMB CYCLONE), I am fairly certain that I would not want to be stranded on a lift chair while they figured out how to separate my frozen body from the chair lift!

The Perfect Family (that is the owner’s real name) might just be making a perfect decision. Here was Timberline’s statement:

The forecast shows extreme high winds and low temperatures that may create dangerous conditions. The potential for power outages, bad roads, and exposure risk will be high. For the safety of our guests and staff, and with consideration of our local emergency services, the mountain will not be open for skiing and snowboarding this Friday, Saturday and Sunday.

The extreme low temperatures create an opportunity for over 72 hours of continuous snowmaking. This will allow us to get nearly 100% of terrain ready for Monday’s reopening. The silver lining of this rare weather event is that Timberline Mountain will have tons of snow and incredible conditions when we welcome you back on December 26th!

You might expect guests who have already paid for their lodging to complain, but the overwhelming response that we’ve seen has been amazingly supportive and highly complimentary.

Here are just some:

Tori Burnworth
I truly respect your decision to look out for everyone’s safety ♥️ You’re running an honorable business.

Dan Sullivan
Given that Tucker County currently has extremely limited EMS capacity, we locals and employees very much appreciate resort management that cares about its impact on the local community and makes solid well considered decisions.

Brandy McCabe
The potential for power outages says it all, I wouldn’t wanna be stuck on the lift with -40 windchill and I don’t think anyone else would either. -40 doesn’t even sound fun to ski or work OUTSIDE in. It does suck because it’s holiday skiing but most places wouldn’t consider all the factors to make this decision. If you think it’s ok to stand outside as a lift attendant or ski patrol go stand outside on the mountain for 2 plus hours at a time and see how you feel but remember to dress appropriately.

J.t. Scully
What professional & thoughtful management looks like. Very happy to be a season pass holder at Timberline.

Brian Harrison
Wise move… think about being stuck on a chair in that weather. Think further about how you will get transported to a hospital if you have an injury. Your guardian angels just protected you from mother nature’s fury!

…and then there is the other side…

I did speak with a couple of resort ops people this morning and I mentioned Timberline’s decision. With anonymity promised, the responses I heard were along the lines of:

Well, I respect that decision, but with all of the people who have driven for hours and spent their hard earned money to get here, we will be open. If we chose to close, we would get thousands of complaints…and the truth is, most of them would come from the very people who probably wouldn’t go out on the slopes. People would be asking for refunds on lodging, even if they wouldn’t brave the conditions themselves.

I will say that Timberline’s decision showed that they don’t only care about the money lost from being closed three days right here before the Holidays.

One look at the LIVE cameras yesterday showed HEAVY traffic on the slopes.

THAT is the primary focus with these cold temps headed our way tonight. We’re seeing around-the-clock snowmaking temperatures and with temps in the single digits and below zero, these crews can turn down the water levels and crank out some champaign powder and really fluff it up.

THAT will enable every ski resort to open more slopes and trails. One glance this morning shows that the majority of the ski resorts are not at a 50% open status at this time. Check out the snow report and FirsTrax report Saturday morning and you’ll see just how quickly resorts can open more terrain JUST in time for the Holiday traffic.

Canaan Valley Resort Update:
It’s official! Our Tube Park will be opening this Saturday, December 24th! Tickets are now on sale and you can purchase your tubing session tickets by visiting ski.canaanresort.com.

The holiday weekend is coming up, and there is a big storm on the way! All of this is looking favorable for snowmaking on the mountain. Right now, our mountain ops are focused on continued snowmaking for Timber Trail and Lower Timber Trail, followed by planned efforts on Upper Canaan Curve, Chute, Valley Vista, and Face. In the meantime, stay tuned for more snowmaking updates in the future. As for now, there will be 4 trails open on the mountain today, specifically in our beginner area.

Snowmaking continued for our third night in a row and we now have White Lightning OPEN! That brings our trail count up to 5. We also made snow on Locher Bowl, Revenuer’s, AND Hangover so things are really shaping up in time for the holidays. We are now running our brand new Lift Two for the first time so lines for the holiday period should be a breeze.

BRING ON SOME SNOW!

In closing, I AM seeing some light snow mix at Wisp Resort. Check out the LIVE STREAM: