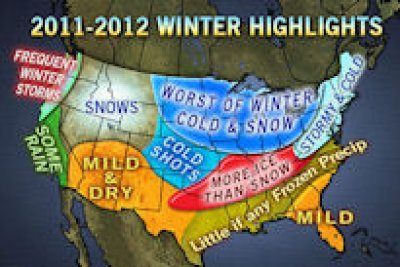 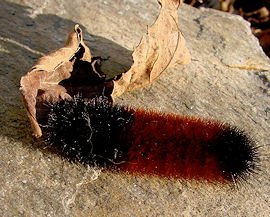 Matt Buckland from Morganton, NC raced his mostly dark brown and black woolly worm on Saturday and won every race he was in…to win the big money and the right to have his fuzzy critter be the official worm to predict the upcoming 2011-2012 Winter Weather Forecast.

Matt shared that he found his woolly worm at the Brown Mountain Overlook on Hwy 181.

Woolly Worms were actually kind of scarce this fall as organizers for the Banner Elk festival were actually soliciting to purchase worms for $1 each over the week prior to the event. I and my family actually picked up seven worms in the week prior to the festival with most of them being very favorable for a cold and snowy winter. The best one was huge and mostly dark, dark brown with black bands occupying both ends.  (See photo.)

I wasn’t able to attend Saturday’s fun, but I was there with family on Sunday and I will be surprised if we don’t end up hearing that the 34th Annual Woolly Worm Festival broke all sorts of attendance records for the event. There were certainly more people than I’d ever seen on the second day of the event. Actually I’ve attended some "Woolly Worm Saturdays" that were not as crowded as yesterday’s event.

After enjoying all I could stand of hearing "Mister Woolly Worm", Roy Krege’s over modulated voice we drove over to the Blue Ridge Parkway around 2:30pm. I figured we’d drive over to the Wilson Creek Overlook and do the Tanawha Trail. We tried turning off Hwy 105 onto 221 at Grandfather Mountain and that was not happening. They were stopping traffic that was backed up for more than an HOUR at that location. So we turned around and headed the back way to the Parkway from Eseeola in Linville. We bypassed all the traffic before hitting a crowded Parkway. 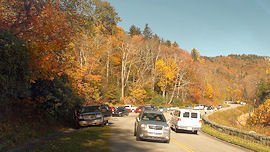 <The Blue Ridge Parkway was packed!

We did the nearly four mile loop (we added a couple of extra side trails) and enjoyed some outstanding color. Afterward we drove across the Linn Cove Viaduct and exited the Parkway at the Grandfather entrance. Vehicles were backed up trying to get into Grandfather Mountain at 4:30pm!!!

Last weekend was the annual OktoberFest at Sugar and it saw record attendance. These kinds of crowds are giving me reason to believe that we’re in for a crazy successful winter in terms of visitation.

We’re still weeks away from the traditional start of the ski and snowboarding season but if early indicators mean anything…it should be a good one.

So just what DID the winning woolly worm predict?

The 13 weeks of Winter are as follows:

WHAT’S EVERYONE ELSE SAYING???

Not so much…just yet. The Farmer’s Almanac isn’t being all that supportive for those of us who want a snowy and cold winter. They seem to be saying that November and December will be colder than normal, but their overall forecast is calling for things to be "Wet and Wild" for the region. Even up into West Virginia they are calling for above normal temps, stormy and wet.

Of course, above normal temps could mean a degree or so…and there’s not much difference in snow at 24° and snow at 25°!!!

We need moisture for snow, so at least that bodes well. 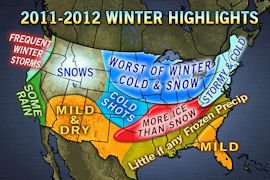 Snow lovers will take great news and forecasts anywhere we can find them and thankfully the folks at Accuweather.com have already released their winter forecast and it looks like we could see what they term as "another brutal one". If "brutal" means lots of snow, then we’ll take it.

Their long range forecast supports the "wet and wild" forecast with what they show as "stormy and cold". The dividing line of "WORST OF WINTER" and "STORMY AND COLD" is one that will no doubt bring more cold and snow than not – at the higher elevations of the southeast and Mid Atlantic.

That’s our story and we’re sticking to it!

So far we have not heard from Brad Panovich or Kenny Griffin in terms of what they are forecasting for the 2011-2012 Winter Weather. However from what we’re seeing it appears that most are favoring a rather volatile pattern that should make for some wild and woolly weather…which should please YoYoMa – and snow lovers of the region.

If things hold as most meteorologists are predicting, we’re likely to see more of a single jet stream rather than the dual streams of last season. Cold air should be plentiful up around Alaska and the stream should keep things chilly across our region.

With all of the massive improvements in snowmaking technology…that should make for a good, consistent season in terms of snow on the slopes. If we can get some natural snows in the mix then even better, right!?!

Some forecast models are actually predicting a little dusting of snow for Wednesday and Thursday for the higher elevations before turning mild again this weekend.

That’s it for now. We have a ton going on right now and we’ll be updating you guys throughout the week on some new announcements! 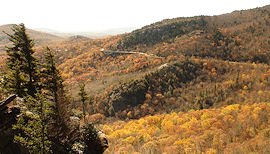 This photo was taken on Sunday, October 16th from atop the Tanawha Trail at Wilson Creek.>>>

We are definately a little past peak color at the higher elevations of the region right now. Some of the ski areas up around Virginia’s Massanutten Resort are looking GORGEOUS right now. We’re likely to hold onto some pretty color through this next week and weekend…so if you haven’t made the trek to the mountains just yet, there’s still time to see some awesome leaf color.

Feel free to email me your photos, comments and any videos at [email protected]

Previous Post
App Ski Mountain is Having Their 14th Annual Tent Sale!
Next Post
Peak Color from atop the Blue Ridge Parkway off of the Tanawha Trail – Photo by SkiSoutheast.com