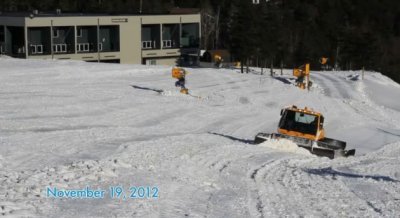 It’s been a while since I’ve done one of these First Trax reports, but I’ve been itching to do one so today is the day! Plus, Tonette is pretty busy with some other things this morning that are non-ski related and asked me to do a little write up. Two of our employees are on maternity leave so Tonette is taking over some of their duties while I take over some as well. Crazy times!

Anyways, there isn’t too much to talk about this morning in the way of snow. Cataloochee and Sugar Mountain are both open for business today, still offering the same trails that they have been for the past several weeks. Don’t take that the wrong way, it’s rather impressive that they are both still open. Hurricane Sandy might have done a number but since then, snowmaking windows have been limited and temperatures during those open windows have been marginal at best. It’s all about the wet bulb! If you’re on the messageboard you’ll get that.

Tomorrow, Snowshoe Mountain opens for the 2012-2013 season. This is their earliest opening in recent history. Snowshoe is really good at keeping everyone updated with videos and they did so once again yesterday. Check it out on the VIDEOS page. They announced which trails and lifts will be running and they also give you a good idea of just how much snow is up there right now. I am jealous of anyone who will be riding tomorrow and this weekend. JEALOUS! I’m itching to ride and that one day at Sugar on Halloween seems like a distant memory now. 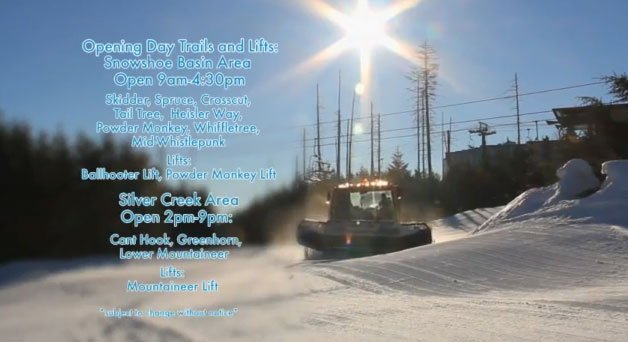 Snowshoe announced yesterday which trails and lifts will be open tomorrow.  Click HERE or on the image to the left to watch the video and see what they are!

I’m hoping the guys at Snowshoe will get at least a couple of the new streaming cams installed either today or tomorrow, but I’m not sure that’s going to happen as it takes a fair amount of work so we might have to wait until next week. These cams have been a long time coming and I’m sure a lot of you are stoked, as am I, to see them. We’re going to have one on top of Shaver’s Center, one on the Boathouse at the bottom of the basin near the lake, and I think the other one is going in at Silver Creek. It’s going to be awesome.

So, what’s up with the weather? I’m glad you asked. After Sandy, things quieted down quite a bit and near normal weather for this time of year has persisted. It’s not been COLD, but it hasn’t been that mild either. If you’re not ready for winter, you’ve probably loved it. However, I say screw that and bring on the snow and cold. Luckily, all signs are pointing to a pattern flip beginning in the next week. A dry cold front moves through this weekend and I’m guessing we’ll see several ski areas, not just the open ones, turn on the guns. I’ve been telling my friends for a week or two now that our favorite ski area will open the first weekend in December. I still stand by that.

After this weekend things begin to look promising for at least the first half of December. The North Atlantic Oscillation (NAO) is about to go negative. I won’t go

into any kind of weather mumbo jumbo about what that is or means, but just know that it’s good. A negative NAO for us is good in terms of colder, snowier weather. It’s what happened a few seasons ago when it dumped every week it seemed like. So stay tuned as we could see a quick start to the season very shortly.

So that’s that for today. Tonette and Mike will be with you guys tomorrow and this weekend. Think snow people! Happy early Thanksgiving!

Have some cool photos, videos, trip reports, or comments you want to share? Send them to kenny@skisoutheast.com.