I and our team enjoy reading the emails and messageboard posts that pour in daily. Most are simply inquiring about all things having to do with skiing and snowboarding. Most are from relative newbies to the sport which is a great sign. The industry is dependent on a growing base of fans and we enjoy answering the questions that come our way.

Occasionally we get an email that kind of stands out and this one was different.

Dana Patrick of Music City (Nashville) Tennessee wrote me on Thursday , "i just learned of your website a couple of weeks ago and after visiting it for a few days I thought I’d provide my 2c. i was telling my wife about how its my new favorite visit each morning and she asked me why. the only thing i could say was that they write funny. she had a puzzled look on her face so i just told her to go on it a couple of times and maybe she’d see what i meant. she did and she agrees, you write funny. shes also now reading the ski news daily. the only way we can describe it is that you guys write like you’re just talking. its kind of like the way my brain works. when im reading newspaper articles all the words just melt together into boring blabber. what im trying to say is that you guys write kind of like you’re just sitting across the table from us. its kind of cool and thought you’d like to know."

I emailed back and forth twice with Dana because a couple of emails later I told him that I’d probably share his comments since it is p-r-e-t-t-y slow around here right now while we all wait on some colder, consistent temperatures.

When I started reading his email, my first thought was, "Is this guy the twin brother of Danica Patrick the race car driver?" Turns out he’s not but he shared that he gets kidded about it often. Not sure why he shared this but he wrote, "no, im not related but the crazy thing is in addition to our names being so close to the same, she looks like she could be my little sister. we’re both dark haired and short."

While I never pay any special attention to making this blabber grammatically correct, at least I use punctuation and capitalization. I’m sure Mrs. Hudgins, my eleventh grade English teacher appreciates that, even though I’m also certain she’s never read a word of these posts over the last fifteen years. I cannot imagine Mrs. Hudgins on a pair of Atomic’s. Now THAT’S an image I’ll have to work to get out of my head today!

Back to Dana’s comments though. I’ve had a couple of people rag me a little about how these posts are structured AND the fact that I give a rats behind as to whether I’m writing a run on sentence that covers the length of a page, like the one that I’m constructing right on purpose because I just simply feel the need to do.

I’m certain by "funny" Dana wasn’t alluding to any skills at writing comedy, because "no" I, nor any member of our writing team, is particularly funny. My younger brother would be a hilarious writer for this website, however that comedy would only be surpassed by the comedy of seeing him on a ski hill. He’s one of those guys that thinks that you have to be a lunatic to purposely apply wax to the bottom of a board that you purposely click into and aim yourself down a 1500′ vertical.

I learned a long time ago not to be overly concerned about any critiques that come our way, and conversely I don’t dwell long on any of the praises either. Okay, that’s not true. I usually print the better ones out and superglue them to the walls of my office to remind me of how great a writer I am. (Hopefully you guys recognize sarcasm when you read it.) 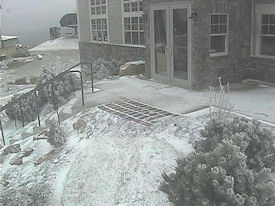 I emailed back and forth a little with a few of Snowshoe’s peeps who were all a bit bummed about Bill Rock’s resignation. As if on some kind of surreal cue, it began to snow. It wasn’t a TON of snow, but it was more than any other resort in the region received on Thursday.

Bill was quoted on Thursday saying, "My time here has been extraordinary. The people at the resort are really special. I’m proud of the results we achieved as a team."

He added, "We’ve created lifelong friends and have amazing memories for our family. It’s been an incredibly rewarding experience here in West Virginia."

SkiSoutheast.com Columnist Joe Stevens, who also serves as spokesman for the West Virginia Ski Areas Association, said, "For the five seasons Bill has been at Snowshoe Mountain, the quarter-of-a-billion dollar industry in West Virginia has benefited from his knowledge in providing a great on-the-slope product and always striving to better customer experiences. Northstar is getting a very proactive industry leader, and the skiers and snowboarders out West will enjoy Bill’s go-for-it attitude."

We can hope so or else we’ll need to set up snowmaking equipment at the lower elevations and truck it to the slopes. AGAIN this morning it was colder at lower elevations than atop Sugar, Beech, etc, etc.

The forecast for tonight is for lows in the mid to upper 20s and that should make for some snowmaking. Saturday night might offer some snowmaking ops, but then we’re looking for a milder week ahead.

Thursday’s forecast looks like it will turn SHARPLY colder with some early showers turning over to snow showers with lows in the mid 20s. EVEN BETTER NEWS is that the following few days are forecasted to STAY COLD enough to make snow each night.

Be sure to check back often for more photos being posted as well as our video blog. If you have not yet visited our Ski Messageboard Forum you should do so.

We’ll be sharing TONS more input about our plans for this season, but for a little sneak peek visit: