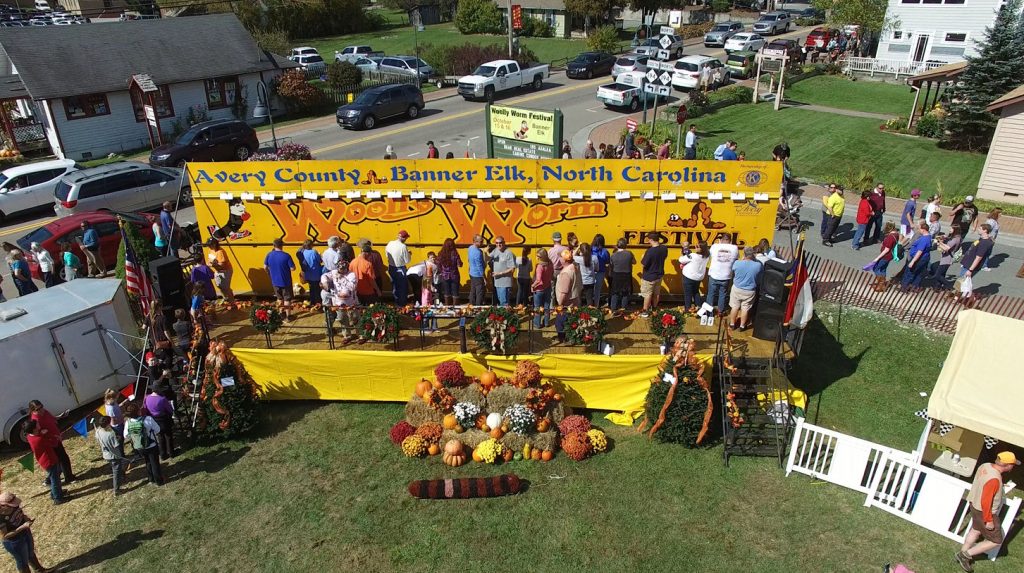 Man what a gorgeous day it was in Banner Elk, NC on Saturday and Sunday. It was a Chamber of Commerce day with sunny conditions, abundant, blue skies and highs in the upper 60s. The radiant sunshine made it feel substantially warmer.

I was able to fly our drone and get some really nice video from the air and ground level and I’ll share that with you guys as soon as possible.

I did not stick around for the championship race to see the name of the winning worm and who won the big money. However, I was emailed the winning worm’s prediction for the winter and snow lovers are probably not going to be “feeling the forecast”.

Let’s get to THAT forecast and then I have some additional woolly worm and weather predictions to lift the spirits of those of us who want a lot more snow in our forecast.

I noticed that Dr. Ray Russell had a vendor booth setup on Saturday, right next to the registration area for woolly worm races to sign up and race their worms. His 2016-2017 Winter Forecast was released to the public on Saturday morning BEFORE the Annual Woolly Worm Festival and I have a feeling that Dr. Ray’s forecast might have been more than a little influential to the official “readers of the worm” and their forecast.

Some of his specifics area snow totals forecasted are:

(Beech normally gets 80″ per winter season.)

You guys can see his entire forecast at: http://averyweather.com/public/FearlessForecast.pdf

Here is Some “Medicine” for Snow Lovers

Dr. Ray doesn’t need us to come to his defense, however I feel the need to share the fact that nearly every weather expert was providing similar forecasts for last winter. Every weather guru in the region was forecasting more snow than normal back in August of 2015. (By the way – we did as well. Okay we don’t predict anything, but we posted our Winter prediction and like everyone else – we forecasted way more snow than normal.)

As things got closer into November a LOT of them began hedging their bets a bit and some forecasted a slow start to winter…and we ALL know how slow last winter was in terms of getting started. Ski areas in the Southeast and mid-Atlantic were not able to get going in earnest until around January 5th or so. Every ski area took a MAJOR financial hit during the always-important Christmas to New Years Holiday ski period.

Every ski area in the region lost MILLIONS in hoped for revenue.

So I think the moral of this post/story is that there is one constant when it comes to long-range winter forecasts. THEY CANNOT BE RELIED UPON TO BE EVEN CLOSE TO ACCURATE.

So we’ve got THAT going for us. 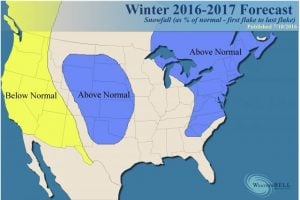 Joe Bastardi and WeatherBell are forecasting a COLDER AND SNOWIER WINTER! CLICK TO ENLARGE!

I’ll admit that I’m one of those winter weather people that “NEEDS” to hear a forecast that supports my wishes. Translation, let’s go look for something more positive than the Banner Elk Woolly Worm Winter Forecast and Dr. Ray’s recent, not-so-snowy one. (Isn’t that what Climate Change Alertists do?)

I didn’t have to search long to find out that our old buddy Joe Bastardi of WeatherBell is forecasting a bit of a sluggish start to winter – HOWEVER he thinks that January through March will be colder and snowier than normal. More about that in a moment. 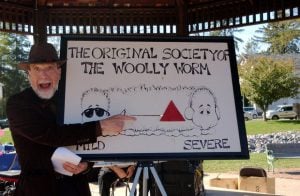 The photo to the left is of Mike Glazer of Lewisburg, Pennsylvania’s 20th Annual Woolly Worm Festival. They held their festivities this weekend as well and interestingly they hunt down as many worms as possible and examine ALL of them and come up with a forecast…instead of picking just one that happens to be running for his life to escape the fate of being groped and stroked (translation: read) to discern the upcoming winter weather.

According to Mike Glazer, “The winter will come on slowly,” he said. December will not be bad but “once January and February hit its going to be severe.”

“We are going to get some nice snow storms this year.”

The woolly worms and AccuWeather agree this winter will be worse than last year’s. AccuWeather is predicting above normal snowfall across this part of the country.

Glazer brags the woolly worms are right 108 percent of the time. Last year they predicted a mild winter, which it was.

The role of the judges, garbed in white lab coats, is to examine with the help of magnifying glasses and measuring devices the size of the caterpillars’ black and brown rings plus the plushness of their fur.

Each judge, using calculators, come up with numbers that are combined and interpreted by Glazer.

THE NATIONAL WEATHER CENTER – which ISN’T FORECASTS ABOVE AVERAGE SNOWFALL

Two weeks ago, this forecast video was released which goes into much data sharing to ALSO predict a sluggish December but a colder and snowier winter than normal.

Bastardi and company predict, “We are concerned that winter is going to get underway during the month of November, at least in a back and forth fashion. The JMA model sticks a trough over the Northeast in December and there is plenty of concern about that. For now we are focusing more on December than November as the “start” of winter. I still love our overall idea but hope to home in on how quickly cold comes in by the middle of October. In the end this winter will be more like 2013-14 and 2014-15 as far as centering cold over the East and Midwest and not across the South. There is low probability of the core of cold being in the West.”

So there you have it. We’re going to hitch our wagon on the WeatherBell peeps…and the collective woolly worms of Pennsylvania.

We’re thinking that the end of October will have us thinking that winter is EARLY later this month with a burst of cold and maybe even some early snow into early November. We’ll get a burst of cold and snow that will crank up snowmaking crews at Cataloochee, Appalachian, Sugar, Beech, Snowshoe and probably one other ski area by mid November to provide some Thanksgiving Weekend skiing.

Then we’ll see a mild period that will have snow lovers, skiers, snowboarders and ski area management crews worried about the important Christmas-to-New-Year ski week. However, cold and some snow will hit about a week prior to that and things will be good for the Holiday period. Then around January 5-10th we’ll see winter hit in earnest with more snow and colder than normal temps the rest of the way.

We will still get the minor-to-mid-range mild-ups but we think the season-long average will lean to colder and snowier than normal. We’re predicting that snow will be around 99%-101% of average – meaning insignificantly plus or minus but with great technology and the support of “Mother Nature” we will have an AWESOME WINTER AHEAD.

We will have perhaps TWO warmups that will cause some temporary closures from some of the lessor aggressive snowmaking ski areas.

How’s THAT for a detailed forecast? For the record, I simply compiled what’s happened every year since I’ve been repping the ski areas of the Southeast and mid-Atlantic and conjured up a creative way of providing it in writing.

Truth be known, I’ve got as much or perhaps a better chance of being accurate than all of the data-collecting weather geeks.

So in summary – EXPECT AN AVERAGE WINTER as far as the WEATHER is concerned with better than average snowmaking technology and snow-makERS who will make snow and groom our slopes to perfection.

We’re now gearing things up a notch around SkiSoutheast-land so check back often for news about “What’s New” at the various resorts.