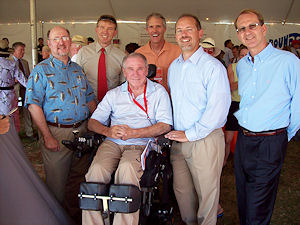 Irving Naylor, owner and developer of Snow Time, surrounded by some of his top staff members>>>

Under a bright autumn sunshine, the Snow Time “family” got together to anticipate the winter while sharing with their friends the pageantry and excitement of the 10th Annual Steeplechase for charity at Shawan Downs in Maryland. One of the sponsors of the races is Roundtop Mountain Resort. We were guests of Irvin and Diane Naylor, owners of Snow Time. A steeplechase accident left Irv partially paralyzed over a decade ago; and Irv has turned his boundless energy toward promoting stem cell research and adaptive snowsports. The Naylors’ three Snow Time mountain resorts in Pennsylvania (Liberty, Roundtop, and Whitetail) are the closest skiing and snowboarding to metropolitan Washington, Baltimore, and Harrisburg, so many of their mostly mid-Atlantic visitors are able to drive an hour or two to superbly groomed snow covered trails when the cities, towns, and suburbs are simply bare, cold, and gray.
.
This coming winter each of the Snow Time resorts will sport major upgrades. Roundtop has installed ten new automated snowmaking towers on the upper slopes which previously thinned quickest in the sun. Roundtop has also renovated both levels of its lodge to provide more cubbies and lockers, refurbished the food court, and added additional picnic tables. Whitetail has added another “advanced beginner” trail, “Ledgewood,” which goes through the woods near the new housing development which will eventually offer ski-in ski-out. Liberty has doubled their hotel capacity to 200 beds, or 99 rooms, with the purchase of the Carroll Valley Resort, literally across the street offering new dining and an 18 hole championship golf course. All the three areas keep improving existing trails, terrain parks, and tubing parks. There are many new perks offered for purchasing season passes and Advantage Cards before October 31, most of which are honored at all three mountains; check their websites for details. Even during peak season there are always discounts; check the websites, call ahead, or listen for their television and radio advertisements .

Last season was a record –breaker, as everyone remembers. It started with early powder to rival the West. By the time it ended, the Snow Time areas provided 92 days of skiing and boarding. Who knows what this year will bring? But, if other blizzards are coming, get into those hotel rooms the night before, and head for First Tracks in the morning.

Previous Post
Is this cool or what? Thanks to Frances (SkiPink), SkiWryter, HNH and Bultacco for making this happen for us!
Next Post
Snowshoe Mountain Receives the First Snowfall of the season on October 5th, 2010