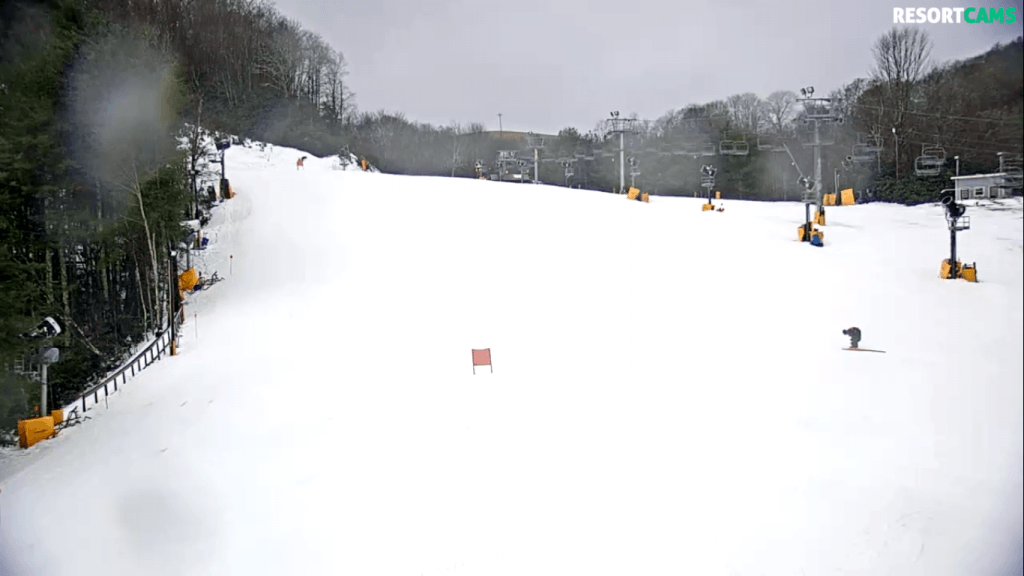 Maybe it’s almost the eerie way that the full (cold) moon lines-up with the the Winter Solstice this year, but I’ll take it. Tonight, we are going to see some light to significant snow accumulations for just about everyone (sorry VA).

Today we have to get through some “under-developed snow” before the goods come tonight. Expect accumulations to happen later than usual as the ground surface temps are still warm (i.e. 49 degrees @ Canaan this morning).

VA Mountains extend their hours . . . Doesn’t look like VA is going to get the snow

Wintergreen: The rain might have forced their trail count down to 7 open runs (with 3 lifts), but Wintergreen extended their hours into the evening . . . Today they are open until 9pm.

Bryce: Open until 5pm with skiing and riding on 7 runs with 3 lifts spinning.

Massanutten: “The current forecast calls for some snowmaking temperatures to return on Saturday night and we’ll be ready as soon as the temperatures allow. Night skiing begins tonight, we’ll will be skiing and riding from 9:00 am – 9:00 pm throughout the holidays.”

NC mountains get snow above 3500 ft . . . rain turns to snow as early as noon at some resorts

Ski Sapphire: CLOSED TODAY . . . due to rain. Sapphire also mentions that as they cold air comes back tonight, that they will “resume snow making”.

Cataloochee: Cat feels the impact of some driving rain today as well, but the rain turns to snow early this afternoon. Still skiing and riding (from the top) until 10pm tonight, but on 12 runs and 4 lifts. “We have some natural snowfall in the forecast for this coming weekend as well!  Snowmaking will begin as quickly as temperatures permit today.” 1-3″ of snow possible tonight. 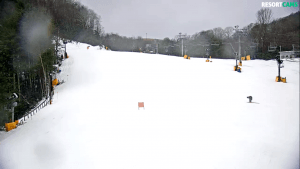 CAT still looks good, even in the rain.

Wolf Ridge: Still open today until 10pm. Granular conditions, with 4 runs and 3 lifts running. 1-3 inches of snow in the forecast for tonight.

Beech Mountain: Holds steady with 11 runs and 4 lifts open. Looks like the rain will turn to snow early this afternoon. 1-2 inches of snow possible tonight. Two events at Beech tonight to kick off your holidays . . . Live music w/ The Paper Crowns (7-10pm), and Battle of the Bourbons (6-9pm).

WV will get the lions-share of snow from this storm . . .

Snowshoe: 3-5″ of snow in the forecast tonight. Snowshoe actually added more terrain to their slope report today (Yahoo!!!) as, “Soaring Eagle lift is back in action today. Please note that our groomers have stayed off most black diamond terrain through this mild weather, so be on the lookout for some bumps and variable conditions forming on the steeps.”

Winterplace: Holding steady with 14 runs and 6 lifts open. Only a negligible reduction in their base . . . but that’s temporary, because 2-4″ of snow is in the forecast tonight.

1-3″ of snow possible at Wisp tonight

New snow accumulation of one inch possible tonight at Ober

Ober: extends their operating hours . . . 9am to 10pm with Holiday Rates in affect. Today, Ober is sking and riding on 3 runs with 2 lifts.

Email me your thoughts, comments or any news to [email protected]m