Wind at Whitetail, Mercersburg, Pennsylvania – The Lifts are Safe!

(Mercersburg, Pennsylvania) Whitetail is one of the more beautiful and majestic areas in the mid Atlantic region, with sweeping vistas, wide and steep trails, and modern, well-maintained facilities. We always enjoy visiting, and are constantly challenged by the trails.

So much attention has been focused on lifts these past few days, because of the unfortunate lift accident in Sugarloaf, Maine. Thank God no one was killed. I want to emphasize, we felt completely safe on the Whitetail Lifts, despite some strong wind gusts. Even the lighter double chair seemed stable. There was adequate staff to help out with loading and unloading, and the lifts slowed up or stopped when the wind gusts were strong. As far as I know, all other lifts in the Mid-Atlantic region were safe, and I have heard of no incidents.

I have been on lifts in strong winds, and even saw some empty chairs flip over in New England. Lift malfunctions are terrifying, and most riders have concerns, whether they admit it or not. But, lifts are better than walking! Millions of us are not strong enough to climb the mountains, and the lifts have opened up the slopes and the glorious sports to the general public.

The skiing on Tuesday, the 28th, was challenging, but skiers and boarders have to be prepared for all contingencies. I knew it would be cold and windswept, but chose to go up anyway. I did not ski much, but it was exciting! The strong winds were at my back, and I could have chosen to utilize them, and let them propel me down the mountain! Instead, I took the cowardly approach and hunched over, until the gust passed. I want to emphasize, I have been in much, much stronger winds in the West or New England.

The conditions were packed powder when we went and all 23 trails, freestyle areas, lifts, and tubing, were open and well-utilized. The conditions improved in the ensuing few days, as the winds died and the weather warmed. 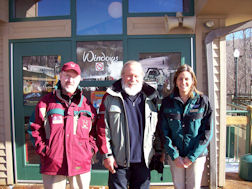 We were pleased to visit with old friends, General Manager Don MacAskill; ski instructors Bill Dietrich and Andi Broom, and the new Marketing Coordinator, Kristin McKendrick. She is a dynamic new asset to the team. The ski instructors tell us they are adding dramatically to their programs for adaptive, or special needs athletes, and are seeing increasing numbers of military veterans injured in Iraq and Afghanistan. Whitetail offers Wounded Warrior individual lessons rather than designating a specific weekend. Both warriors and instructors can also participate in those group conventions around the country, of course. All these programs are run by dedicated volunteers, who say they are honored to help the warriors. The numbers are increasing, and donations to the adaptive program are most welcome. Whitetail offers a $5 discount at any time on any ticket to any active duty military who show ID. 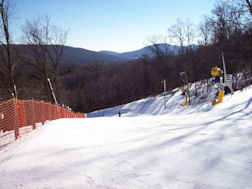 My husband, Charles, wanted to try the newest trail, Ledgewood, and has some comments. Although rated a beginner run, Ledgewood is narrower and appears to curve and drop steeply into the woods; it then broadens out and offers an option to return to the open learning area and it’s U-Me double chair or the Easy Rider quad to the longer and steeper “blue-green” trails. It does reward with some views of the Indian Springs Lake in nearby Maryland. Eventually, it should lead to new condo and rental spaces.

Whitetail is about a two hour drive from the Washington and Baltimore metro area. It is a new and different world, and the employees all believe this will be a banner season. Hopefully, it will be a Happy New Year for all! Connie and Charles