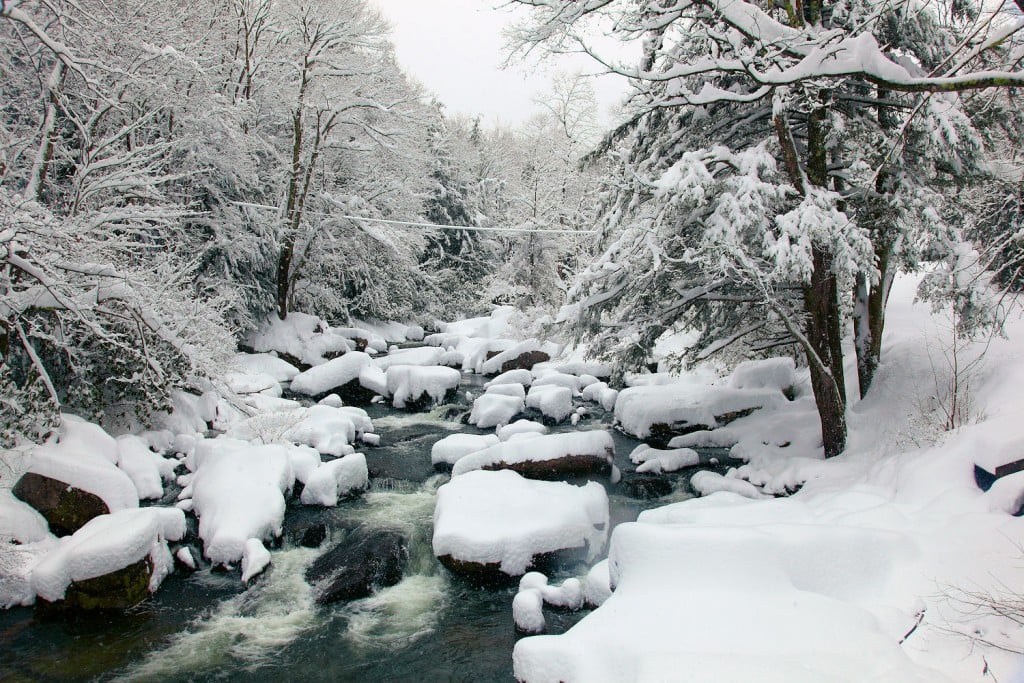 Okay, we’re going to be on ‘pins and needles’ awaiting the official Woolly Worm forecast that will come our way in about a month – tell me that’s not hard to believe??? Where’s the time go? Our firm is actually working on the finishing touches for the new Woolly Worm website so we’re probably going to be at the festival and probably doing a bunch of drone-flying and reporting from the scene. (We MIGHT even have a new LIVE streaming camera setup prior to that…)

So we’ll certainly give the fuzzy creatures their just attention. However, weather news of a potentially more accurate measure was released recently and the first that came our way is from WeatherBELL. Before I get into the specifics on their forecast, let me state that I am all too aware that there will be a a bunch of you out there (I see you Joe Stevens, Brad Moretz, Dave Dekema and others.) who will no doubt roll your eyes over these kind of longer-than-long-range weather forecasts. Sure, they’re speculation…but it IS speculation that based on lots of scientific data and with better and better technologies every day…and these forecasts are performed by weather gurus with dozens of years of experience.

If one of these forecasts crushes on our dreams of a snowy winter, some of us are quick to respond with something like, “Aw, these things are never correct.” When they forecast 150% of normal snowfall for a winter, a lot of us grab onto it like we’ve just been introduced to a modern day Nostradamus. Others will poo-poo the idea as rubbish and take a wait and see mindset, saying something like, “These guys can’t forecast the weather next week, much less next month or the winter.”

Admittedly, any reasonable thinking person would tend to err on the side of the last comment. However year after year, season after season these forecasts come out and every time that they do I will admit that I jump on them with hopeful anticipation. If that forecast predicts a snowier-than-normal winter, then I’ll admit that my heart races a little bit and I get pumped.

So in reality whether these kinds of forecast have any accuracy or not, I guess they do serve to get us excited about an upcoming winter – especially if you’re a snow-loving freak, like most of you reading this post 😉

…and what’s wrong with that, right? In fact, I’ll go as far as to say that ANY NEWS that talks up a great winter ahead…is valuable in terms of “exciting the masses” and the news from WeatherBELL is p-r-e-t-t-y exciting.

However, before I get to that…

Around this time of year I start getting a rise in emails about the Old Farmer’s Almanac, The Weather Channel winter forecast and more. I’ve already read more than I care to share about the “stronger than normal El Nino”, etc.  I guess we’ll have to share that over the next few days (and we will) but as I was reading some content about the Old Farmer’s Almanac I could help but catch something that I thought was odd. I don’t know if any of you did, but here’s what I caught…kind of reading between the lines.

The new 2016 version of the Old Farmer’s Almanac is out and they appear to be thumbing their noses at the usual winter impacts of a strong El Nino event, which favor a mild winter in the northern U.S. and abundant rain in California.

We’ll share their full forecast from our southeast and mid-Atlantic region – as it applies to our ski area winter forecast at another time. However, what I felt was odd was some response from meteorologists TOWARDS the Old Farmer’s Almanac forecasts.

Here are  some of those bashes:

“[Here’s] your annual reminder that using the Farmers Almanac for a seasonal meteorological outlook is about as good as going to a psychic,” tweeted Matt Lanza, a meteorologist based in Houston.

“[It’s a] forecast that has as much accuracy as a Magic 8 ball,” wrote Connecticut broadcast meteorologist Ryan Hanrahan on his Facebook page.

[I]t’s basically the print version of a psychic reading on a 1-900 number,” wrote Dennis Mersereau, who pens Gawker’s weather vertical, The Vane. “The Old Farmer’s Almanac is to meteorology what astrology is to astronomy.”

I mean we love our Brad Panovich’s, Ray Russell, Herb Stevens’, Joe Bastardi’s and the like, but tell me once where ANY meteorologist nails the whether forecast for more than ten days ahead? I don’t know another profession other than weather forecasting and baseball where you can make a good living and fans will love you when you fail 70% or more of the time.

For meteorologists to post remarks against the Old Farmer’s Almanac like some have is like the pot calling the kettle black. While I would never plan my life around ANY weather prediction – i DO look forward to them and I don’t know about you guys but I like a snowy forecast that says that we’ll get 200% of our normal snows for a winter….

So Let’s Get to it… WeatherBELL says….

As of August 27, 2015, WeatherBELL is forecasting temperatures in the Southeast and mid-Atlantic that will be from 1-3° colder than normal. That is a slight adjustment to the COLDER SIDE from about three months earlier. So the trend is colder. 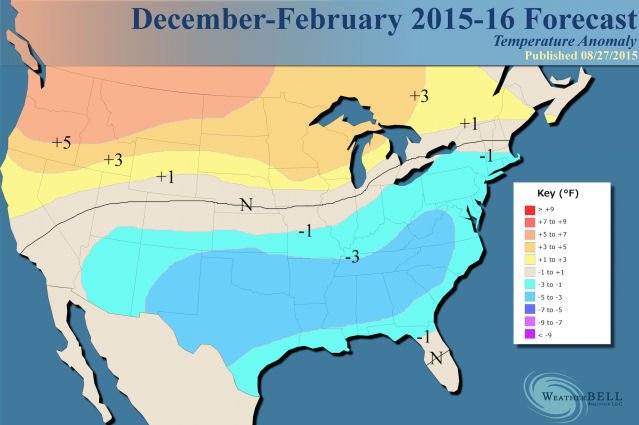 As stated earlier, they are now forecasting 150%-200% of normal snowfall for the winter for those of us in the Maryland, West Virginia, Virginia, Tennessee and North Carolina ski resort areas! 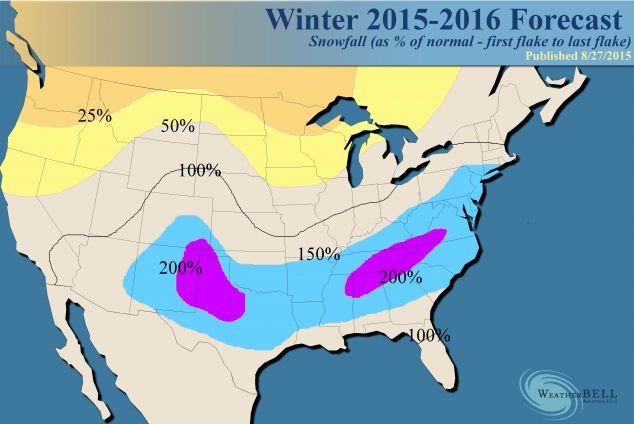 We’ve had some awesome winters over the last few. The 2014-2015 season was about as good as it gets in terms of good skier visits and well-timed weather. If the 2015-2016 winter is as snowy as WeatherBELL thinks, then we could see some record skier visits as well.

For those unaware, WeatherBELL is staffed by some real institutions in the weather forecasting industry.  I’ve included their bios below – in their own words.

Formerly the Chief Long Range Forecaster at Accuweather, Joe Bastardi is an institution in the science of weather prediction. Many companies across a multitude of industries, from energy to retail, have profited from his forecasts. His exceptional skills are rooted in a comprehensive understanding of global oscillations and in-depth analysis of historical weather patterns. Mr.Bastardi’s analog approach, which finds similarities between current and historical weather patterns, allows him to make an accurate forecast, sometimes in defiance of computer model consensus.During his 32 year tenure at Accuweather, Mr. Bastardi built a large private client services business.

Mr. Bastardi is also well known for his blog featuring the popular videos “The Atmospheric Avenger” and “The Raging WeatherBull.”

His reputation for making bold and accurate forecasts has landed him on major television programs including Fox News Live, ABC World News, The O’Reilly Factor, The Colbert Report, CBS’ The Early Show, Imus in the Morning, and several others.

Joseph D’Aleo was a co founder and the first Director of Meteorology at the cable TV Weather Channel. He has over 40 years experience in professional meteorology. Mr. D’Aleo is now co-chief Meteorologist with Weatherbell Analytics LLC.

Mr. D’Aleo was Chief Meteorologist at Weather Services International Corporation and the WSI Intellicast.com web site. He was a college professor of Meteorology at Lyndon State College. He has authored a resource guide on El Nino and La Nina and papers on how research into ENSO and atmospheric, oceanic and solar oscillations have made skillful seasonal forecasts possible. Mr. D’Aleo has also published papers and made numerous presentations on the roles cycles in the sun and oceans have played in climate change.

Joseph D’Aleo is a graduate of the University of Wisconsin with BS and MS degrees in Meteorology. His master’s thesis was on explosive development in east coast cyclones