When Snowmaking Survives The Warmth

Hello skiers and riders of the southeast, and welcome to winter, again.

With seasonal temperatures finally returning and the hustle and bustle of December being boxed up for a long duration, we can happily announce that we have trudged deeper into this ski and snowboard season with grace. You will need a winter coat and extra layers for the next few weeks while more terrain opens up so we can spread out some more.

It is a bold, yet backed-up, claim to say that OUR region has the best snow-making systems out there. The evidence for that notion is based upon our terrain endurance plus the fact that various places elsewhere have been at a much higher risk for temporary operational suspension. Sadly, that unfortunate news is reality for a handful of locations that rely on Old Man Winter including Mad River Glen in Vermont and Les Contamines, which is a resort in the heart of the French Alps.

The lack of snow is so bad for those French folks that they had to cancel a World Cup telemark ski race recently, according to a recent story from Time Magazine.

I say that while noting that a lot of fine people skiing and riding in the western side of North America have experienced the opposite end of the snow spectrum so far this season. If only they could share all that cold and snow elsewhere…

Anyways, that top-notch snowmaking is what has allowed us to pass through this brick-oven and dish-washer like spell with plenty of runs to play upon. A recent product testing day trip to Beech Mountain Resort confirmed the claim as true, and there is much more to say about it. 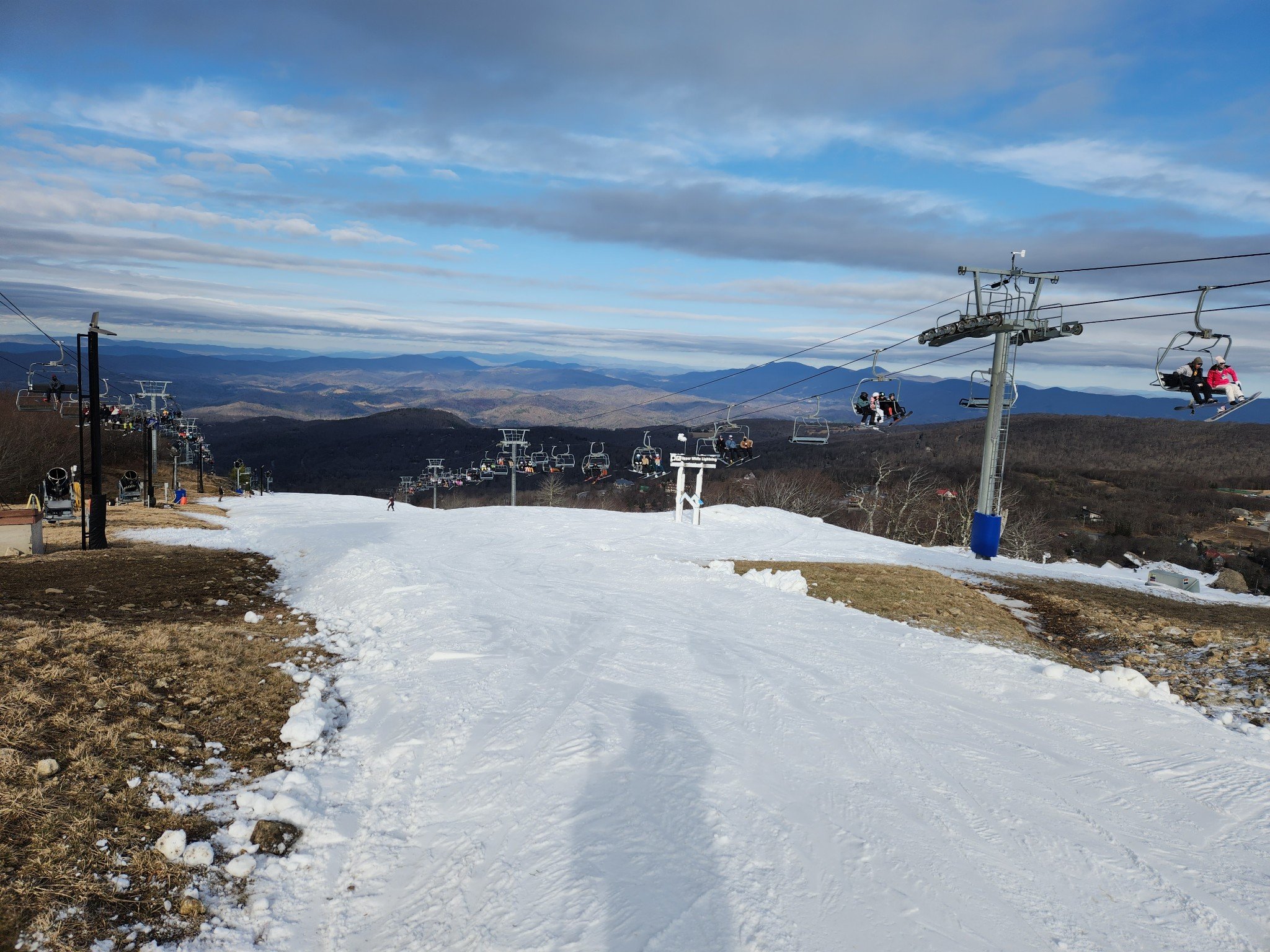 Being a weekend warrior when the conditions are ripe comes with larger crowds and longer lift lines.

The best way to counter those measures is to be at a place that happily welcomes the masses and uses its manpower and machinery to the fullest, and one can say that not many can come close to the capabilities of Beech.

On this particular day, every minute that passed meant one or more parking spaces being claimed. I left Charlotte around 7 AM and arrived roughly two and a half hours later to an almost full upper-level parking lot but was fortunate to find that hidden gem of a space before having to descend down to another lot.

If only I had woken up when the first alarm was blaring instead of snoozing a bit more.

On a side note, the route I took off Exit 104 on I-40 heading into Morganton is an absolutely gorgeous showing, especially when you arrive at the Brown Mountain Overlook on Highway 181. The views west and southwest from there towards Hawksbill Mountain, Table Rock Mountain, and The Chimneys are worth the drive, especially in the winter months when the trees are leafless. You will not be disappointed unless it is a really foggy day.

Once geared up and finally taking that first ride to the top, in this case, less than a five-minute wait at Lift #5, it was off to another day with spectacular views to be had. Beech Mountain Resort is surrounded by mountains in all directions, and when the summits are not kissing the clouds, the scenery takes over.

Some of the more prominent features are Grandfather Mountain, Elk Knob, and a decent amount of eastern Tennessee looking towards Mountain City and a sliver of Bristol.

In fact, if you “hike” past their 5,506 summit facilities, you can grab a seat to simply take in the natural wonder of it all. Beech was serving up both of their summiting lifts, #5 and #6, while also spinning the #1 lift for intermediates and the #3 for beginners, plus the #8 Play Yard area bunny slope.

Personal favorites were both black diamond runs, White Lightning and Southern Star, especially on those lower portions where moguls slowly developed due to how soft and spreadable the snow was. Little to no icy patches or bare spots whatsoever, and instead burning leg muscles and occasional “Yee-Haws” from various patrons.

Other trails, such as Shawneehaw and Robbins Run, had thick snow bases and wide enough side-to-side coverage to accept the groups of people as they made their way down. There really was no bad choice when it came to which run would be next to navigate.

It is at this moment on a busy day when the chatter begins, and before you know it, you have made a few early morning laps that were accommodated with multiple conversations between total strangers. I thoroughly enjoyed the time spent conversing with the owner of Beech Meadows Ski Shop, a terrific guy that calls himself King Fish, especially when he said they have the best and nicest employees around plus a great inventory of rental and demo skis and boards. If memory serves me best, Atomic and Solomon skis are the brands they have on hand, but I did not have a way to write it down in order to fully lock in that information. 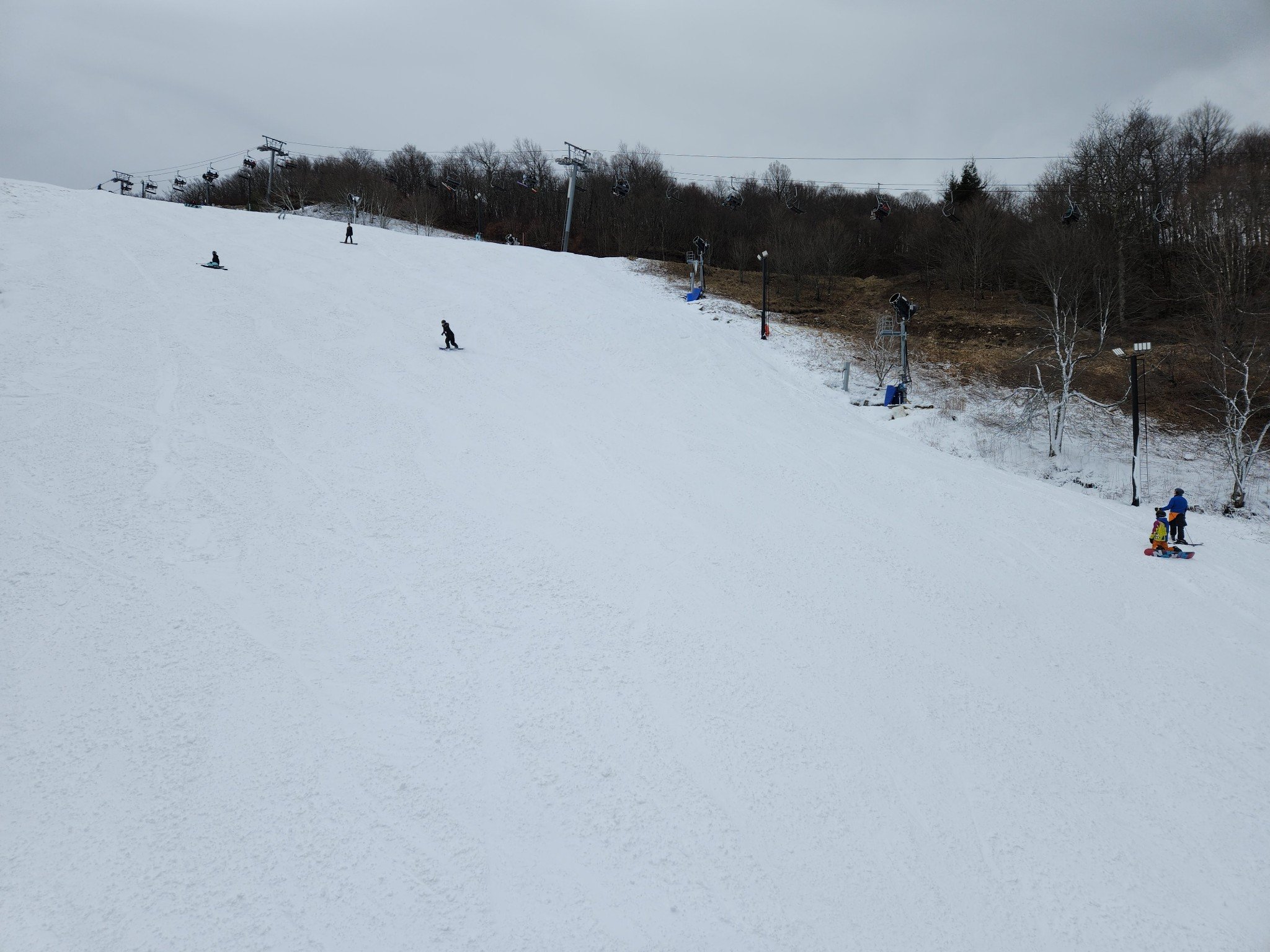 I do recall him saying that they even offer a great deal for those who demo and immediately fall in love with the equipment, meaning they want to purchase it outright, by deducting the cost of the daily rental from the retail sale.

That is a rarity offer and definitely one worth taking if the need arises.

And it is not just the chair lift rides that bring these moments of enjoyment. I spent roughly an hour-long break sharing various stories with a family of four that had two daughters attending Virginia Tech University. They provided some insightful tidbits of college life, places they have skied at, and plans for the future.

Best of luck on your educational endeavors and keep up the top-notch parenting by making skiing a recurring family experience.

It should be noted that it is the humming and buzzing of a resort operating like an efficient machine that makes ski days like this worth it.

From the lift lines to the food and drink services, and even the ticket sales window, everything flowed in the right direction. The consequence for all of that is a positive one consisting of happy smiles, laughter, and a decent body workout. Those are things that embody the lifestyle of skiing and snowboarding, and we are thankfully in the thick of it right now. Previous Post
A Chill Wednesday On Tap
Next Post
A Wild Weather Ride For Thursday; Snow In Forecast For Friday