WHAT YOU SEE IS WHAT YOU GET, UNLESS OF COURSE THERE’S NOTHING TO SEE 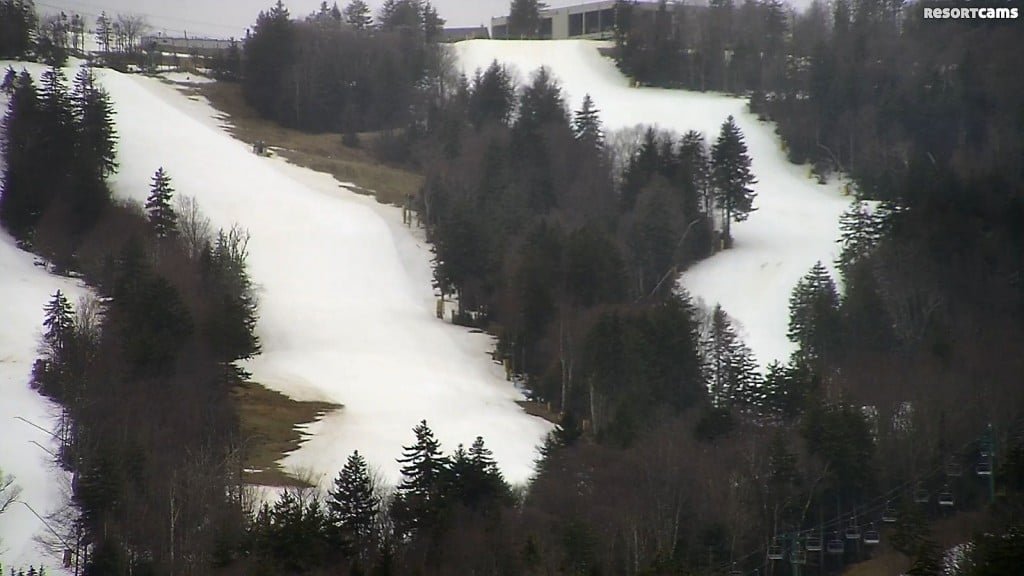 It’s Monday, December 29th and we’re all anticipating the return of some colder air that will allow for snowmaking to resume at all of the ski resorts. It’s SEEMINGLY cold enough at a couple of locations to do so – like 27° at Wisp – but they are not making snow as of 5am Mountain Time. Yes, I know it’s 7am EST, but yours truly has been hopping out of bed at 5am Mountain Time to get you guys the latest and greatest news and information with which to plan your trip to the mountains.

I’m going to direct you to the SNOW REPORT PAGE for all the details like how many trails are open, and base depths, and I’ll provide a few notables below.  In terms of the lead title to this particular Mountain Blog, I’m alluding to those ski areas which have done a nice job of providing us with the ability of giving each resort “the eyeball test” via LIVE WEBCAMS. Nothing is better for determining the value of the price of a lift pass like BEING THERE and seeing the slopes for yourself, but the next best thing is being able to do so via webcams.

Some ski areas have really embraced the concept like Snowwhoe, Winterplace, Canaan Valley, Timberline, Wintergreen, Massanutten, Beech Mountain and Sugar. Others have at least some measure of webcam with which to see the slopes – and all of these allow for YOU, our visitors, to make at least some measure of an informative decision about where or IF you want to invest your time and money in a visit.

So we’re recommending you to VIEW THE SNOW REPORT, CHECK OUT THE LIVE WEBCAMS, and the notables below and we hope to see you on the slopes!

The colder weather is about 24-30 hours away in terms of allowing snowmaking opportunities at all of the ski areas. As of 5:44am MT, we’re seeing lots of mid-to-upper 30s and low 40s for temperatures right now, with some light drizzle in the forecast across much of the Southeast and mid Atlantic.

Interestingly Wisp, Canaan and Timberline all showed temps in the 27° range but no snowmaking as yet which probably means that the temps across portions of their mountains are not quite conducive to snowmaking either.

Cold air and even some light snow should filter into the region on Tuesday, allowing for snowmaking and quickly-improving conditions.

The Omni Homestead Resort is temporarily closed due to the weather and hopes to reopen with the cold air coming in. Stay tuned for more information.

Wolf Ridge Resort – closed for night skiing last night due to the weather but as of 8:45am are reporting to be OPEN with 2 slopes. We’d suggest calling ahead to see if Wolf is open for Monday skiing and snowboarding or tubing. That phone number is 800.817.4111.

Ober Gatlinburg is still open with the same base and same two slopes, but I received this post from Ober’s Winter Sports Director on Sunday, “I was reading your story this morning about how some of the SE resorts have not dropped their base depth numbers.  In Ober’s case it is due to the continued use of SnoMagic, which has been pumping product out non-stop for several weeks now.  It is SnoMagic that has kept us alive and able to provide our guests with the sliding experience that they came to the mountains for.  Right now I have a couple of feet in  my teaching area and under our handle tow.  The terrain park is operating entirely on SnoMagic.”

Sapphire Valley is temporarily closed for skiing, snowboarding or tubing.

IT”S ALL THE BASE…

Wisp reported a 2″ drop in base…

Massanutten Resort is reporting a 20″ average base which reflects a 4″ drop. They are offering good coverage, but reported, “Chance of a rain/snow showers with highs in the upper 30’s. Thin and bare spots exist, ski with caution.  Snowmaking will resume as soon as possible.”

Wintergreen reported a 2″ drop in base and also lowered their slopes open by 2 to now reflect 10 of 25 trails open for day and night sessions.

Timberline Resort is reporting a 20-30″ base which is a drop of 6″ but things look pretty good with 13 trails open again today.

ALL other resorts should have reported some base depth drops and thin coverage areas as well. Kudos to those that did so.

Cataloochee reduced their slopes open from 11 to 10…

Sugar reduced their slopes open to 10 of 21… 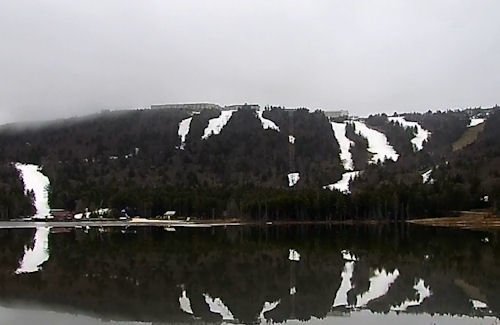 While all of the region’s ski areas are fighting to provide the best conditions, THERE IS some good terrain open at several resorts. The image to the left is of Snowshoe this morning.

It’s been tough seeing my beloved Southeast and mid-Atlantic resorts struggle so for conditions and slope openings when every day here in Vail, Colorado it has snowed with temps in the teens all day and night. We’ve seen 6-12″ of snow each day I’ve been here with – you guessed it – 6-12″ MORE snow in the forecast for today. The bowls on the back of the mountain have snow depths that are only allowing the tips of trees 12″ tall to peek above the surface. The powder is unreal to say the least and I’ll try my best to lasso this pattern and bring it back with me on Friday.  I’ve refrained from posting a ton of photos, because it just doesn’t seem “the thing to do” with conditions being such a struggle back home.

I’ll try to take some time later in the day to post a TRIP REPORT over on the messageboard for those interested.

Until tomorrow – THINK COLD and SNOW!