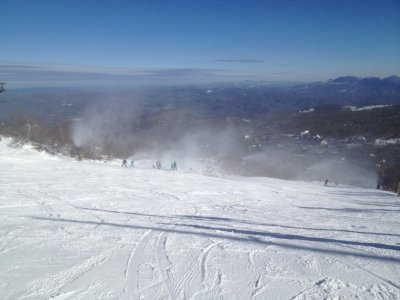 Wow, what a freakin cold morning!  I could be wrong, but I'm almost positive this has got to be one of the coldest mornings here in the High Country in the last couple of years.  Driving through town this morning there was a sign that read 18 degrees and I immediately began to think how cold it had to be up on to of Beech and Sugar.  Sure enough, it's in the single digits on top of both mountains with wind chills in the negatives.  Our Sugar Mountain weather station registered a 40mph wind gust early this morning.  Brrr.

The coldest location this morning though goes to Canaan Valley.  Their snow report this morning showed a temperature of -2 degrees with a wind chill of -22.  That is brutal.  Canaan is also reporting an inch of new snow this morning.  Snowshoe shows the same and Timberline and Wisp are both saying they've seen a half inch of natural snow in the past 24 hours.  For a complete list of temperatures this morning and snow conditions head on over to the SNOW REPORTS PAGE.

If you're headed out today you should be treated to some awesome snow conditions.  Make sure to bundle up though as it's going to be chilly everywhere even with sunny skies.  Just about every ski area we cover is in a wind chill advisory today.  The image to the right shows you what I'm talking about.  The light blue areas are counties under the wind chill advisory.  Those wind chill values will be lucky to get into positive territory.  It's going to be that cold!  I'm going to suck it up tonight and head to Beech for a night session after work.  The conditions are worth it right now.

What a difference a week makes.  The heavy rain of last week is a distant memory and while I wouldn't say we're seeing peak season conditions, the skiing and snowboarding is fantastic right now.  I'd imagine the ski area managers and vacationers breathed a heavy sigh of relief this weekend as conditions drastically improved at the last minute.  Things looked rather bleak Thursday morning and then BAM, winter returned in a big way.

I was pretty busy all weekend so I only glanced at the cams, but from what I saw it was packed at the resorts.  The mass of humanity on the base cam at Beech was crazy.  My buddies were up there both Saturday and Sunday and said they grilled out more brats than they made runs in two days total.  Anyone who goes to Beech knows it's busy when they open Lift 6.  I made it up there yesterday and was pleasantly surprised at how good the snow is right now.  It's hard to believe that there was barely any snow on parts of the mountain a week ago.

Here's the view at Beech yesterday.  It was fun!  Photo courtesy of messageboard member skipink.

Hopefully all the vacationers and anyone else who made it to the resorts this weekend had a good time and I'm glad that the weather cooperated.  Whew, did we get lucky!

Now that the real cold has arrived, it looks like it's going to stick around for a while.  The next week is going to be frigid.  Weather gurus have seen this coming for a few weeks now and it really doesn't come as a huge surprise.  A majority of the ski areas will not see temperatures above freezing over the next five to six days.  You read that right.  The only ones who look to get above freezing are in the southern portion of North Carolina.  Everyone else is going to be in the freezer.  On top of that, snow is in the forecast for the latter portion of the week.  This is a pretty exciting time for snow lovers in the region.

The weather forecast for Snowshoe this week gets me excited.

We made it through a tough early season and the annual January thaw.  It looks like we're going to get rewarded now with some fantastic skiing and snowboarding conditions over the next few weeks.  We deserve it after the past year and a half!

Just a few quick notes before I go…Look for the Canaan cam to go live this week.  We had some issues on Friday and I'll be working on that today and tomorrow.  Somebody in the messageboard was asking about the Snowshoe cams.  I promise we're still working on those as well.  We want them to work just as much as you all do!

Finally, planning for the annual Snowshoe Summit is about to get into gear.  I'm planning to talk to Dave Dekema at Snowshoe about that today and will hopefully have some information for you guys this week.  So stay tuned for that!

Finally, Appalachian Ski Mountain is currently offering discounted memberships that are good for the rest of the season.  They have several different options for individuals and families.  Click HERE to read more about it.

Check out the snow reports page for a complete and detailed list of conditions at the resorts.  I'm out.