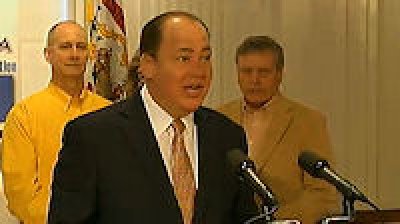 As far as last second decisions and promotions go this was a winner. Around 8am this morning Joe Stevens, who serves as the official spokesperson for the West Virginia Ski Areas Association and who also provides content for SkiSoutheast.com via his "Snow News is Good News" column, called me with the idea of streaming the news conference LIVE. Earlier in the week he invited us to attend the event held at the state capitol, but we already had other plans.

When he proposed the idea we figured we'd give it a shot and while streaming live news feeds is nothing new in the grand scheme of things, it IS new for us here at SkiSoutheast.com and for ANY ski area in the region.

While streaming an event is as simple these days as pointing your Android or iPhone at someone and broadcasting it through a video server, doing so with the kind of traffic we have on a moment's notice was something we had not even tried. It was simple – obviously – but nevertheless exciting to do it and know that more of these kinds of things are available to us in the future. Kenny already has ideas to broadcast LIVE from the SkiSoutheast.com / Snowshoe Summit in early March, as well as broadcasting LIVE interviews FROM the mountain resorts of the region – slopeside. So we'll forward to doing more of that.

REGARDING THIS PRESS CONFERENCE… 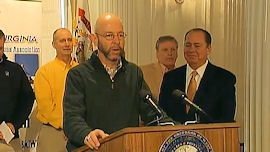 Joe Stevens was great in recognizing SkiSoutheast.com right off the bat by informing those in resort and industry officials in attendance, the news media in attendance and those in our viewing audience of the fact that the event was being streamed LIVE via SkiSoutheast.com. Hats off to Joe Stevens and his Media Center crew for handling the IT efforts to do the broadcast. If you guys ever need any event covered Joe Stevens and Dan Shreve are your people. You can visit their website at www.TheMediaCenter.TV for more information. 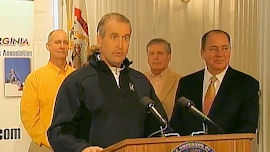 Again, Joe started off the procedings with introductions to all viewing of ski industry officials in attendance. I noticed Tom Blanzy of Timberline made the trip as did members of Canaan Valley, Snowshoe Mountain and of course Terry Pfeiffer, who is the West Virginia Ski Areas Association President, was front and center. Terry is also President of Winterplace Ski Resort.

After Stevens' great intros and comments he handed off the podium to Pfeiffer who covered the facts that tourism is big business in the state of West Virginia, and during the winter season, West Virginia alpine and nordic areas attract more than 800,000 skier visits.

"These visits pump over $250 million into the economy and support 5,000 jobs," stated Pfeiffer.

He shared that West Virginia saw 5-6" of snow overnight and that it was snowing DURING the press conference – which Governor Tomblin took "tongue-in-cheek" credit for. 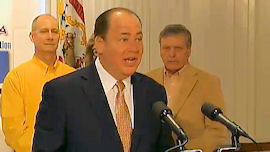 Terry introduced the Governor and he smoothly handled the usual giving of proper credit to the ski area owners and managers for doing such a great job of job creation and the effects of economic impact on the local communities surrounding the resorts.

…and then with the stroke of a pen and a proclamation from the Governor, the state of West Virginia joined 33 other states that have declared January as Learn to Ski and Snowboard Month.

Below, the group poses with Governor Tomblin of West Virginia to show the proclamation: 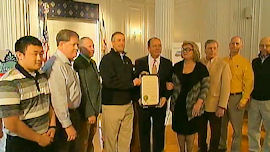 For those of you who joined us in viewing this event, drop us an email and let us know how your viewing experience was. It will help us in broadcasting future events.  I've already heard mixed reviews from some who said that the broadcast was "as smooth as a baby's behind" to "jerky".

Bear in mind that LIVE STREAMS has as much to do with YOUR internet connection as it does with the broadcast end of things. That said, all of us here in the office saw the event nearly as good as television quality for most of the broadcast. Towards the end of the LIVE STREAM we saw a little buffering.

By the way, if you missed the broadcast and just want to see what we saw in terms of broadcast quality, check back over on the video page as the entire thing was recorded by Joe Stevens' crew and we should be receiving the raw feed from them soon. We'll post it up for all who missed it.

Until next time…email me any comments to: [email protected]