We Still Have Several Weeks of Skiing and Riding

Good Monday morning folks! Hope everyone had a good weekend and was able to get some turns in, especially Saturday. Looking at trip reports and pictures it looked like Saturday was the day to ride, with sunny skies and moderate temperatures making for some pretty fun spring like riding conditions. I wasn’t able to get out until yesterday and rode for a couple hours before some underdeveloped snow began falling and 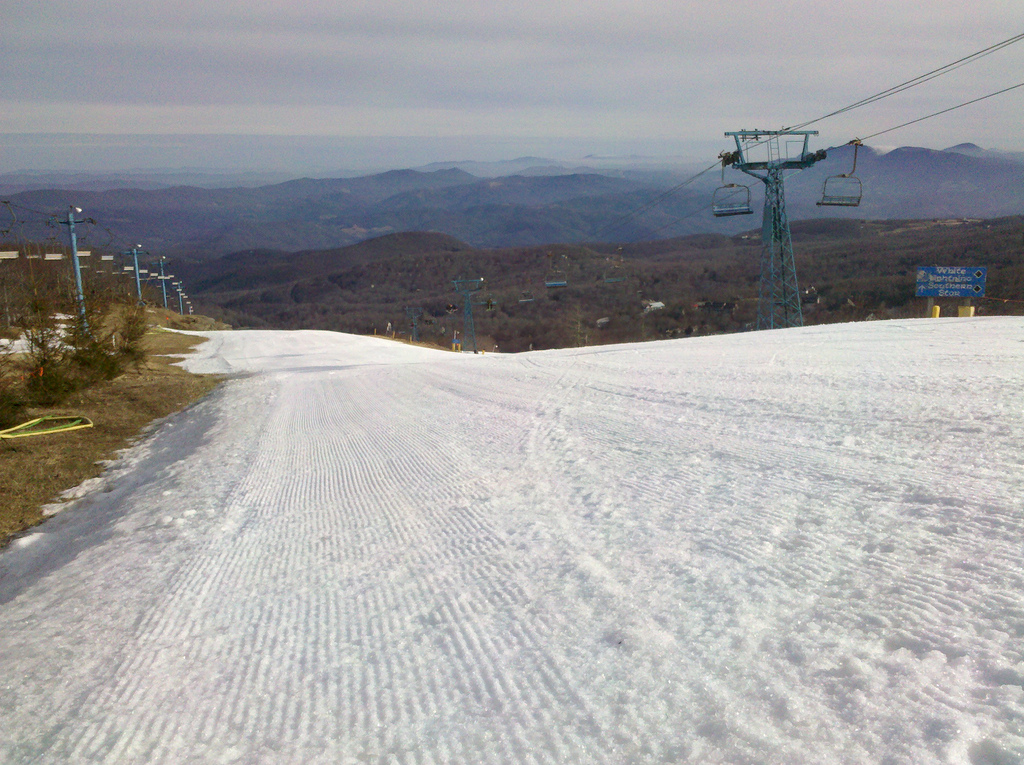 forced me to head for cover. Unfortunately, it appears that some more of the underdeveloped stuff is going to move into the region today and fall at just about every ski area. The NWS is even calling for some thunderstorms and strong winds too, making for a less than ideal way to start the work week.

<<<Saturday offered some great spring like conditions, as seen by this pic from Beech.

With the recent mild and wet weather, it seems that we might be seeing our first resort casualty of the season. Wolf Ridge is closed until Saturday, weather permitting, and I received an email from yesterday from a season pass holder up there. This is a little bit of what he said, “Wolf has plenty of coverage to stay open if they want to. If they WANT to. Only a thin spot here and there with plenty of snow to push around. The surface is exactly like you think, heavy and wet…Here is the problem, only maybe 30-40 people on the whole mountain. Even the staff regulars are calling today the last day of the season, like they already know. Ski Patrol had the classic sound system and music set up outside like they do on the last day. My Vegas odds just went down on my closure bet.” That is definitely not good news for people who love the Wolf. We’ll see what pans out this week in terms of the weather and hopefully this email isn’t accurate and we’ll see Wolf open back up for the weekend. I’m going to ask people at some of the other resorts today and see what their plans are for closing dates. Check back tomorrow and I should have some more info for you.

As Mike was talking about yesterday, it’s pretty crazy how this year has been a tale of two seasons. While it is a bummer that the conditions haven’t been as good as we hope the last few weeks, we really should feel pretty lucky to have had the December and January that we had. Back in October, I was really worried about what type of winter we would see when every weather guy was predicting a somewhat dry and mild winter. Being a meteorologist myself, I was thinking the same thing 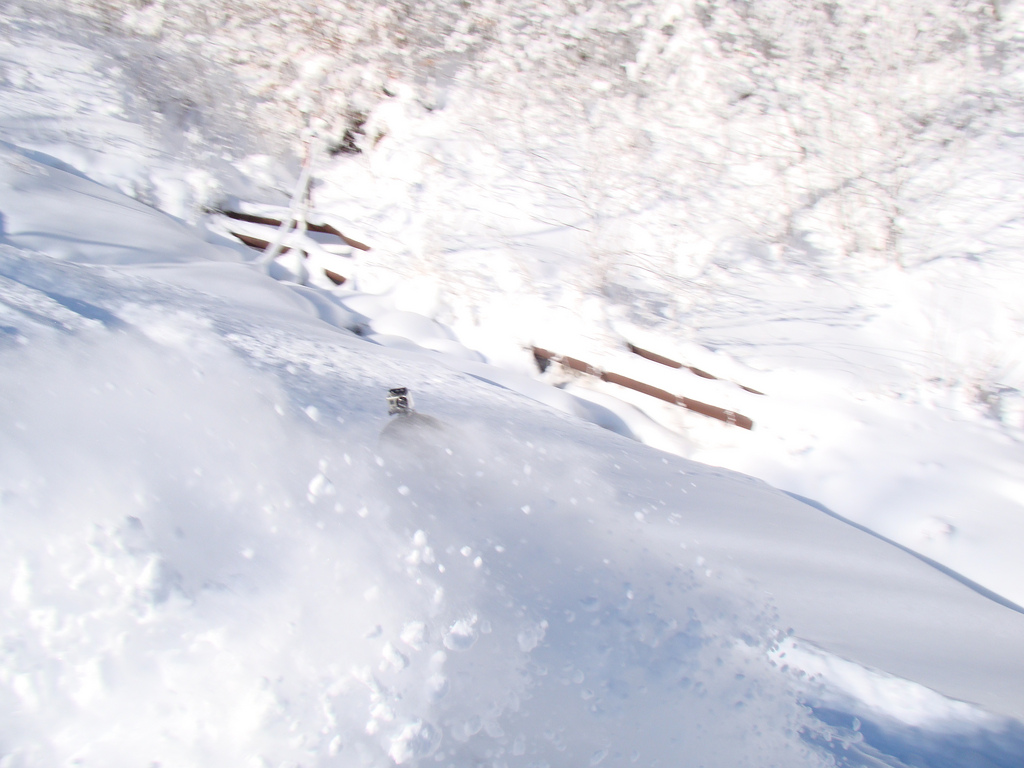 would happen based on the La Nina that we were and still are in. Luckily, that didn’t happen and we were blessed with storm cycle after storm cycle for about two months. I had several of the best North Carolina powder days I’ve ever ridden in. So while the end of the season has been less than ideal, it could have been worse in that our entire season could have been like this!

We were lucky to have>>>>> had many powder days producing face shots like this!

Enough talking about that. The fact of the matter is we still have several weeks of skiing and riding left. Many resorts still have large enough base depths to stay open for three of four more weeks. They don’t close up shop because of a lack of snow, it’s usually because of a drop in customers. So make sure to get out there and give them a reason to stay open! It won’t be powder conditions, but it is still fun and a day on the snow is better than one where you’re not!

Snowshoe Snowshoe Snowshoe! Just a reminder that this weekend is the Ski Southeast Summit at Snowshoe Mountain. It’s going to be a great time and there are still places available to stay at. Use the SkiSoutheast code when you book a room and you will receive 25% off lodging and FREE Sunday lift tickets! We’re still working out the details and will keep you updated this week. Click here for more info.

Here are the resorts…

Ober Gatlinburg – 63° – Open on 6 of 9 trails today with a groomed surface and all lifts operating. The day session begin will begin at noon today and they will be skiing and riding until 10 pm tonight. Tubing and skating are also open today.

Wisp Resort – 52°- Open on 29 of 32 trails today with a loose granular surface. Lift tickets are only $29 today which is a pretty good deal. There will be no night skiing tonight but tubing and ice skating are open.

Snowshoe Mountain – 49°- I’m pretty sure their temperature reading on their website is wrong but regardless, they are open on 59 of 60 trails today with a loose granular surface. Despite the storms last night they are still going strong! Here’s what they have to say – "Happy Monday! With another great Snowshoe Mountian weekend on the books, it’s time to start looking ahead to this week. Weather wise, today looks to be the most discouraging of the next 7 – and even that’s not too bad. We’ve got showers, and brisk gusting winds forecast for us most the day today, but they should be cleared out by early evening. There’s even a chance for some new Snowfall to occur over night!

As we look forward to the weekend weather, the forecast calls for daytime highs in the lower to mid 40’s with low’s in the lower to mid 30’s, and a slight chance of precipitation. What’s that mean??? It should be an awesome weekend for with near perfect weather for the Cuervo Games of Winter!

Now, a quick look at what’s on tap for the week:

Cuervo Games of Winter March 3 – March 5: Join us on the mountain for fun and exciting Winter games like Snow Volleyball, Tug-O-War, Duckie Racing, Blind Saucer Relay, and Cardboard Box Car races during the day – and evening parties at the Connection, Hoot’s, Junction and Moonshine!

Comedian Paul Hooper March 4th – March 5th: Comedian Paul Hooper brings his comedy styling’s to the Comedy Cellar located on the Conference level of Mountain Lodge. Paul, a native of Charlotte, North Carolina has already proven to be a hit in clubs from Florida to Alaska. He has been featured at the HBO Comedy Festival in Vegas, the Boston Comedy Festival, Michael Moore and Jeff Garlin’s Traverse City Comedy Arts Festival and was a finalist in the 30th Annual Seattle International Comedy Competition!

Snowshoe For U March 4th – Mar 6th: We’ve tapped our best resources, our employees, and come up with a great offering of completely FREE programming that will have you looking and thinking like a local. From how to tune your gear to where to find the best groomer, bumps or powder stash on the mountain, our Snowshoe For U Programs will give you the best inside information from the locals who live it every day. It’s like Snowshoe 101, but WAY more fun than any classroom you’ve ever experienced.

As you can see, even though Spring is right around the corner, we’ve still got a LOT of winter left in us up here at Snowshoe Mountain. And, with some of the best conditions, mildest temperatures, and best deals of the year – now is the PERFECT time for an escape to the Mountains. So, get in your car and get up here!

Canaan Resort – 55°- Open today on 32 of 39 slopes with a loose granular surface. Cross country and snowshoeing are closed today, but tubing and ice skating are open. Also, today is Food Bank Monday. Bring a non-perishable item and receive a lift ticket for just $15.

Timberline – 55°- Open today on maybe 36 of 39 trails with a wet granular surface. I say maybe because I don’t think the snow report on their website is 100% accurate. The backcountry is still holding on and is open with a 2-11” base.

Winterplace – 57°- Open today on 100% of the mountain with a groomed and granular surface. Both of their terrain parks remain open and tubing is also open today.

Bryce Resort – 47°- Open today on 100% of the mountain with a groomed surface. They will not have night skiing tonight but tubing will be open.

Massanutten – 56°- Open today on 100% of the mountain with a groomed and granular surface. Both terrain parks are still open with a number of features set up. Tubing is also open today from 9am to 9pm.

Wintergreen – 53° – Open today on 25 of 26 trails with a groomed surface. They will not be night skiing tonight and tubing will reopen tomorrow. It’s nice to see a resort letting everyone know they will continue to make snow when possible, even if it is almost March.

Appalachian Ski Mountain – 52°- Open today on all 12 slopes with a groomed and wet granular surface. Ice skating is also open today. They have a promotion right now where you can buy next year’s season pass and ski and ride for free for the rest of this season. That’s a pretty cool deal.

Beech Mountain Resort – 48°- Open today on 14 of 15 trails with a wet granular surface. Oz Run is closed today. Just to let you guys know, they are also saying that Crossway is open but I was there yesterday and it is not. There are still plenty of trails to ride though.

Cataloochee – 55°- They are open on 13 of 16 trails with a groomed surface today. Tubing will reopen on Friday and there will not be night skiing tonight, but there will be afternoon half day rates available. They are going to be having their BIGBIGBIG One Day Season Pass Sale on Sunday, March 6th. Pass prices will be the lowest of this year and next and if you are a new pass holder you can ski and ride for free for the rest of this year! Also, just a reminder that it’s Learn to Ski and Snowboard Season at Cataloochee and with the purchase of rentals you get a free 1.5 hour beginner lesson.

Sapphire Valley – 60°- Their website shows their hours as being open tonight from 5pm to 9pm. I would call ahead to make sure.

Sugar Mountain – 57.4°- Open today on 100% of the mountain with a loose and frozen granular surface. Sugar is still going strong. Skating and tubing are also open today.

Wolf Ridge – As I mentioned already, Wolf Ridge is closed until Saturday, weather permitting. Check back for more info