WANT TO KNOW WHERE THERE IS 17 INCHES OF SNOW ON THE GROUND…RIGHT NOW? 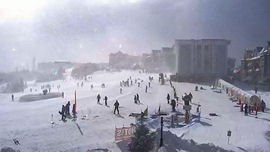 It's still snowing around the region at a few locations. I received a few emails overnight asking who got the most snow. So we'll get to that in a moment. Some ski areas saw 7" of snow in the last 24 hours and they have 17" of snow on the ground right now. That's a tease that you'll have to read deeper to find out about.

…Snowshoe is getting snow this morning. See it fall via the live snowcam!http://www.resortcams.com/webcameras-snowshoe-shavers-centre.php

Some of you guys OFF THE MOUNTAIN saw as much or more snow than we had here in the High Country. For example, Waynesville, NC saw 4.8" of snow overnight, compared to 4.3" at Beech and Sugar.

I made a road trip to Watauga Lake on Saturday to check on my boats and was surprised to see more snow on the ground in Hampton, Tennessee on the top of my boat than what was on the ground in Banner Elk. That is NOT an over-statement. It snowed HARD while we were at the lake and I and my crew had actually planned an impromptu "polar plunge" into the lake, but we had to call that off when the heat in the boat wasn't working properly. It was 21° outside and 40° inside the boat. Four portable heaters and three hours later (around 6pm) it was still only 55° inside the boat so we called it off and headed back to the warmer interiors of Sleepy Hollow!

The roads were covered around Roan Mountain and of course as we got back to around the foot of Sugar Mountain. I was still surprised to see more snow on the ground at Lakeshore Marina in Hampton than at Alpine Ski Center at the base of Sugar.

The snow and some awesome cold temps will combine for yet another amazing day to be on the slopes. Pick and resort, head to it and you'll enjoy your day. 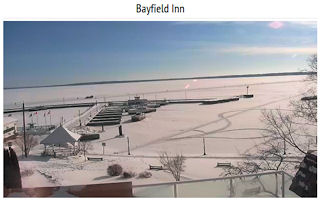 I was looking around at the cams quite a bit throughout the day on Saturday. I have an app that allows me to monitor and view ALL of the cams that we have running. It is amazing to be able to watch the crowds and the snow with the swipe of a finger. I can literally pan, tilt and zoom dozens of cameras from Lake Superior to Costa Rica and of course most all of the ski areas.  At times yesterday I saw snow falling and as beautifully and as hard as I've seen it in numerous years.

Did any of you stick around and watch the LIVE OUTHOUSE RACES BROADCAST at 2pm on Saturday? Honestly I forgot about it because I had planned a little trip over to Watauga Lake to check on things at my boats and upon arrival there was met with more snow and harder snowfall than we had at home in Banner Elk!

I didn't see where Sapphire provided a link to the race broadcast (afterwards) but I was able to find this short clip posted on YouTube. https://www.skisoutheast.com/videos.php

That's ALL you guys want to know, so I'll compiled this bit of information and then you can read the rest of the details per ski area to see how much snow is on the ground and how much snow has fallen all season long. Also remember that ours is the only snow report that includes all of this data at one glance. You can also click on ANY resort and get seasonal snowfall totals anytime all season long.

SNOWFALL SINCE FRIDAY AT A GLANCE:

Editor's Notes:
Canaan Valley and Timberline Resorts tend to ALWAYS under-report natural snowfall. I guess they get so much of it they don't feel the need to boost their numbers. Regardless, David Lesher runs a weather center out of Davis, West Virginia and we see his numbers posted at NOAA and also over on CoCoRaHs. Want to see some BIG SNOW numbers? Check these out for Canaan and Timberline recently:

Right Now Canaan Valley and Timberline are showing 17" of natural snow on the ground. Want to know where to head to play in deep snow? Look no further!

Sugar is over-reporting this morning. That's unusual for them over the last few seasons. They reported 4" yesterday morning and I can promise you that it was closer to 2.5" up top, and according to the CoCoRahs snow reporter up at the top Sugar they had another 2.5" since Saturday morning for 5" since Friday. We'll give them 6" since Wednesday.

Anyone else notice that Wolf Ridge has not made snow in a while? At 8° this morning all other resorts were bombing their trails. Wolf has not had more than 10 trails open all season without natural snow. Have to wonder if they are looking at riding out what they have on the slopes right now.

Old Joe Stevens gets as riled up as I do about base depths, because SOME resorts tend to use them as "marketing numbers" rather than accurately measured snow depths. Base depth figures aren't important at all to some ski areas as they never change them once the season starts. We incorporate reported base depths in our snow reports…and I'm not sure why. As Joe always says, "You can only ski on the top several inches of the snow anyway. So WHAT if there are four feet of snow below you."

Regardless some resorts rocket base depths up at the beginning of the season when snowmaking is ongoing and then during thaw periods they barely creep downwards. The only reason I'm even mentioning them this morning is that one ski resort rocketed their base depth up by 10" since Saturday morning evidently taking note that a couple of their neighboring resorts had reported base depths much, MUCH higher than them. On the other hand Canaan Valley hasn't changed their base depths since winter officially arrived back in mid December.

The resort that rocketed up their base since Saturday by 10" will have to bump theirs up a bunch more as their neighbor upped theirs by 5" from yesterday. Time to play catch up…

SNOWSHOE MOUNTAIN: 6" of New Snow; 9" since Friday; 120" on the season
57 of 60 Trails Open; Snow Tubing, Snowmobiling, SnowCat Tours and lots of Backcountry Fun. How about 242 acres to play on or in? I'm expecting an Ed Schneider POWDER video at any moment! Check out that LIVE cam at: http://www.resortcams.com/webcameras-snowshoe-shavers-centre.php

THE HOMESTEAD RESORT: 1/2" new snow; 12.5" on the season
6 of 10 Trails; 42" Base; Tubing and Snowmobiles are open. No night skiing tonight.
Check out the LIVE CAM at: http://www.resortcams.com/webcameras-homestead.php

TIMBERLINE RESORT: 7.1" new snow; 13.7" since Wednesday; 140.2" on season
100% Open with all 40 Trails; 12-58" Base; 25km of backcountry open for cross country skiing. AGAIN, I am SUCH a HUGE fan of their new snow report page. Check it out to see where the best snow is; where you need to use care; where it is natural snow only. Man I just like this new report Tom! http://www.visitcanaan.com/timberline/snow-report-spreadsheet.html

BEECH MOUNTAIN RESORT: 4.3" new snow; 7" since Wednesday; 73" on the season
That's now 20" of snow since February 1st for Beech. They are in awesome shape and should provide some Kodak moments for today. Beech reports there will be NO snowmaking during the day. See: http://www.resortcams.com/webcameras-beech-base-cam.php and also the slopeside cam at: http://www.resortcams.com/webcameras-beech-slopeside.php

SAPPHIRE VALLEY: 1" new snow; 1" since Friday; 3" on the season
100% Open with both trails and snow tubing as well. They haven't updated any reporting for a few days and we think they may not have made snow even though they could have. There were grooming this AM.

WINTERPLACE RESORT: 3" of new snow; 5" since Friday; 62" on the season
100% Open with Awesome Conditions; 30-56" Base; Snow tubing and terrain parks are open as well. I'd expect Travis Roberts' new "This week at Winterplace video to be nothing short of awesome! Great images at: http://www.resortcams.com/webcameras-winterplace.php

WISP RESORT: 4" of new snow; 7" this week; 131" on the season
Wisp is 100% open for the first time this season. They also have Snow Tubing; Ice Skating; Mountain Coastering. Not sure what to make of the fact that Wisp hasn't made snow the last few days and with 10° temps they are reporting some "loose granular" conditions along with their POWDER?!?! They are getting some snow this morning and conditions will be awesome…and cold!