VOTE NOW for Ryan Locher for the 2015 SAMMY Leadership Award! 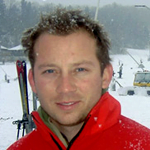 A member of the management team at Bryce Resort has been nominated for the 2014 SAMMY Leadership Award.  What is the SAMMY Award you ask?

“Who are the emerging leaders redefining the future of our industry? The winter resort industry has some great talent in its ranks and we want to recognize them for their leadership, innovation and passion. The final winners will be announced in SAM Magazine and at the SAMMY Awards at the NSAA National Convention in San Francisco.”

VOTE NOW for Ryan Locher for the 2015 SAMMY Leadership Award!

Ryan has helped upgrade the snowmaking and grooming operations and has led Bryce to enjoy its earliest opening, latest closing and longest season in its 50-year history. He was also instrumental in acquiring the resort’s first new chairlift in over 45 years. Said one nominator, “Ryan quickly realized that with our short ski season in the South, Bryce needed to become more of a year-round resort. He brought the first Neveplast summer tubing operation in the USA to Bryce. He installed the first zip line operation and lift served downhill biking park in the state. He expects a lot from his employees, but leads by example by working side by side with them on the hardest and dirtiest jobs. He works well with the public; especially with the children and families that make up the biggest percentage of clients.”

Help represent the Southeast ski and snowboard community by voting for Ryan below!  Please submit only one vote. Voting closes April 10. Click on the link below.