Up to Two Inches of Snow Falls to the North! Cold air allows for Snowmaking! 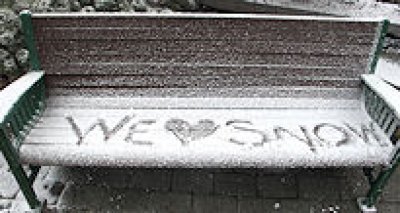 Twas the day before Christmas,
and all through the region;
Not a creature was stirring,
but for snowmakers and their legion.

The cars were all parked
by their rentals with care;
in hopes that these guys,
could make snow – SOMEWHERE!

You have to give credit,
where credit is due;
to Gunther who makes snow,
well above thirty two.

The forecast looks iffy,
for snowmaking chances,
at resorts in the region;
time for snow dances.

Think SNOW my friends,
or at least tons of COLD.
Cause this lack of skiing,
is getting real old.

I drove the eight minutes up to Sugar Mountain this morning. Normally I do Christmas Eve reporting from home, but I have some work to do this morning to fulfill some promises I made to Canaan Valley and Timberline Resort today. So before going to the office I drove up to have a look at Sugar. My family came by Friday evening and said the snowguns were firing, even though the temperature readings were showing 39°! As I left home my temp showed 34° so I figured I’d see at least a nice thin covering of white on the slopes. As I drove up Sugar’s entrance, the temp still read 34° and as I climbed the side road up to some of the slopes, the temperature climbed a degree. 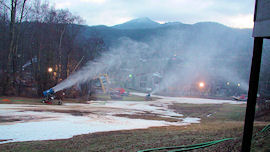 Snowguns were still firing away, but there was very little to show for all that effort. However you have to give Gunther and his crew a lot of credit for trying. The drive up the slopeside road showed about one-half of the parking areas for those lodging units had vehicles in them. License plates showed that visitors were here from Mississippi, Tennessee, Florida, Georgia and South Carolina – to name a few. Those guests within those units had to be looking out of their windows hoping for some colder air that would change that wet mist – to snow. As of 7:30am, the snowguns were blasting nothing but a mist that was quickly turning my pull-over to a soaked mess.

Beech Mountain looks like they got a little more out of their snowmaking efforts as things are certainly a bit whiter with better coverage at the base up there. For a lot of years I have been chastised for reporting how much better Sugar’s snowmaking efforts were compared to that of Beech’s. When I’ve argued that with basically the same weather Sugar always seems to have better snow – Gil Adams and others would rightfully defend that Beech was doing the best that they could with the weather they had. Maybe there was something to those arguments because you would think that the weather from Sugar to Beech has been the same thus far this season – but for the last few days at least – Beech looks a ton better to go play on. Beech is operating from the top with five trails and pretty decent coverage considering there’s been little to work with in terms of weather.

Ditto that of Cataloochee in Maggie Valley. They are offering the best looking coverage in the state right now.

So maybe I’ve been an idiot at times – when perhaps only ONE DARN degree difference in temperatures can really make a difference.

A case in point would be over at Blowing Rock’s Appalachian Ski Mountain where they can usually blizzard up their mountain like nobody else. They are operating right now with only two beginner slopes and Lower Big Appal and get this —

They are offering a "free-style" area on Lower Orchard Run where you have to hike up to ride it. Desperate times call for desperate measures.

WEST VIRGINIA AND MARYLAND GETTING AN UNFAIR ADVANTAGE…

Things are a LOT colder from Wintergreen Resort in Virginia and NORTH into West Virginia and Maryland this morning where temperatures are showing anywhere from 20° at Snowshoe Mountain to 24° at Wintergreen. Snowshoe Mountain is reporting 2" of snow in the last 24 hours and there’s a chance for a little more today. They and all of the resorts up there are blasting the slopes and what is coming out of the snowguns is snow. Timberline and Canaan Valley are reporting 1" of new natural snow.

Snowshoe is still sitting on 29 trails open but we have the feeling that will go up over the next couple of days.

One of my lodging clients dropped by the office yesterday and as all conversations have begun lately, he said, "Gunther’s making snow right now." I was admittedly surprised since I usually know that kind of thing before my clients do. I quickly looked at their webpage and saw a temperature of 36°. I made a comment that was admittedly not as supportive as I should have been and my client responded, "They can make snow up there at 36°."

Not so much. But you HAVE to give any resort that is trying whenever possible a hearty helping of praise and respect. That I do.

I remember a few years ago when after all was said and done – and all the bean counters had done their thing, that the resort’s were reporting that business had been off by anywhere from 60-70%. I have to think that this one will be worse than that. I’m speculating here, but I’d have to think that a lot of people who are here or on their way for the Christmas week are a combination of those folks who simply weren’t willing to sacrifice their first-half deposit on their rentals – or those that are just the kind of people to make the best of a bad situation.

I’ve spoken with a bunch of people who have already shared that they will come and hike, maybe go horseback riding or take in Grandfather Mountain or other attractions that are located in their favorite mountain community.

Good for you guys.

If you’re headed into the West Virginia and Maryland resort areas, you’re in luck as things look pretty darn nice up that way – at least comparatively so. There’s lots of good coverage and conditions are looking nice by the moment with good snowmaking ops.

The weather DOES look like it should allow for some snowmaking at most all of the resorts over the next few days. Some will see teaser/borderline temps and others further north will get a bit colder temps.

Yesterday only Sugar was reporting bare spots. This morning more are. It’s good to see people are paying attention to this stuff that I write.

Here’s the summary of what’s happening.

We love you guys! Merry Christmas and may Santa bring you everything you asked for…and may he have a word with God and get some cold and snow around here!

Appalachian – 29° – They are making snow this morning. 3 Trails open. Open for day sessions only today.

Beech Mountain – 24° and making snow this morning. 5 trails open for day sessions only.

Sugar Mountain – 24° at the top and making snow. Up to 4 trails open today with skating as well. They are reporting that they will be open tonight as well.

Bryce Resort – 34° – No snowmaking that we are aware of. Open with 4 trails for day sessions today.

Massanutten – 32° – No report of snowmaking this AM. They have two trails open for day sessions and reported, "Massanutten Ski Area is still open, but on limited hours. We have two beginner trails open with limited snow coverage. The Ski Area is operating on a day by day basis as we wait for cold weather to make more snow."

Wintergreen – 24° – Not SEEING any report of snowmaking???! – 3 trails open for day sessions and tubing is open as well.

Canaan Valley – 27° and 1" of natural snow to report! They ARE making snow and have 5 trails open for day sessions today. Ice skating is open as well.

Snowshoe Mountain – 20° with 22° at the base. They saw 2" of natural snow in the last 24 hours and are making tons of snow at those temps. They have 29 trails open today and night skiing tonight as well. Tubing is open as are some terrain parks!

Timberline Resort – 27° and 1" of new snow and making snow to beat the band! They have good coverage on 4 trails for day sessions today.

Winterplace – 29° and a Trace of new snow and they are bombing the slopes today and plan on giving Winterplace fans a nice Christmas Day Opening!

Wisp Resort – 24° and making snow with 4 trails open til 9pm. They have tubing, ice skating and mountain coaster all open.

Ober – 33° – teasingly close but no snowmaking yet.