Meteorologist Brad Panovich’s Newest Skier’s Forecast video was posted this morning and I had to laugh when I saw his title to this one – SNOWMAGEDON PART II!

Brad starts off by sharing that this storm will be MAINLY up in the Virginias but even the North Carolina mountains will get some snow.

The moment I walked in the door of my home on Monday afternoon I was confronted by my wife and daughters with, "What’s Brad say is going to happen with the snow?"

They then shared that their friends had been reading Ray Russell’s website on Monday stating that the High Country was in for the most snow we’ve had this season – which would be another DUMPING. Admittedly I had not been able to look in on things on Monday due to other more pressing issues for me – like making a living. However, several friends called to ask, "What’s Mike’s guy saying about this snow coming in?"

First of all – Brad is OUR GUY…and he’s in popular demand around these parts because not only is Brad a snow-loving freak – he’s been very accurate with his forecasts this season. It seems that there are a lot of you guys and gals out there that simply can’t get enough input about what’s going to happen in your weather future. I have to admit – I look at NOAA, NWS, Ray, Brad and even click over to our messageboard where threads have been created to show the "NOWCAST" with all sorts of mapping, etc.

All the school kids who read Ray’s weather on Monday had planned on NOT being in school today. SURPRISE! We did see some flurries overnight but only enough for a gnat to measure. So the kids are in school.  That 1-4" of snow that Ray forecasted for overnight and today didn’t happen. Cool thing is it isn’t raining freezing rain either!

As I drove in to work this morning I couldn’t help but notice that the temperature here was already 32° and with ANY warming at all any "snow" will probably be underdeveloped. Ray’s still saying 1-4" today for the mountains of the High Country. I don’t know.

Now he’s calling for 2-10" for the Boone, Banner Elk, Valle Crucis and Blowing Rock areas…and a Blizzard for Wednesday. With 55-70 mph winds and blinding snow we could have 2-10" of snow that nobody can even find because it will end up somewhere in Tupelo, Mississippi!

It WILL BE COLD as highs around here are forecasted to be in the teens on Wednesday and single digits overnight tonight and Wednesday night and that will create some amazing wind chills in the MINUS 30° range!

Not e-x-a-c-t-l-y the most snow we’ve seen this season kind of storm but to defend Ray, he’s not saying that this morning. Ray’s post this morning is forecasting cold temps for the next seven days and the fact that "snow is not out of the question for Friday but not in his forecast."

SO WHAT DOES OUR GUY SAY??? 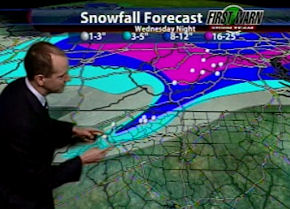 As with all other weather gurus, Brad is tracking two storms. The first is today and into Wednesday with what Brad calls "near blizzard" conditions in the North Carolina mountains and even up into the Virginias with significant snow on Wednesday.

Brad is forecasting 8-12" of snow in the North Carolina mountains within a narrow band and what looks like 3-5" for a lot of the areas around Western NC. That’s pretty close to Ray’s 2-10". Looks like 3-12" according to Brad’s map.

West Virginia looks to be getting BOMBED – again with perhaps as much as 16-25" of snow!

Yesterday I was speaking with Snowshoe’s Sonny Gower and he told me, "Mike you have to see the piles of snow we have here and it looks like another 14" is on the way."

How about maybe 20" plus more snow, Sonny?

So the SAME areas that got hit hard by this past storm look to getting walloped again with snow measured in feet! Brad says, "Those areas shouldn’t get QUITE what they did from the last system where 25-30" of snow fell. Maybe just a little bit below that."

Brad thinks that a little northwest flow snow is the story for this weekend that should setup some great ski and snowboarding conditions for all of the resorts. Cold temps are in the forecast as well so if any ski area wants to make snow they could…although other than possibly Ober and Sapphire I don’t think the snowguns will be running. If things keep up the way they have – the snowmaking crews at the resorts can camp out in the ski patrol huts and play cards all day and night. God’s giving us more than enough in the way of natural snowfall! 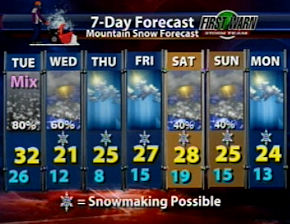 Through next Monday we’re seeing highs in the teens and 20s and lows in the single digits and teens…with some snow several days within the forecast period.

Stay tuned for updated snowfall totals as they continue to soar and we’ll keep you guys aware of the road conditions as good as we can!

Stay warm…and wax up the equipment and ready yourselves for some MORE POWDER!

Email Mike at [email protected]  and send you comments, photos, videos and thought as often as possible!