Up to Six Inches of Snow Fell Across the Region Yesterday!

Snowwwwwwww!!!! That was the title of my post yesterday and I felt like saying it again this morning.  I’m sure many of you are in a pretty good mood due to the snow and return of colder temps yesterday.  I’m also smiling this morning because Duke won last night.  Oh yeah!

Many of the ski areas in the region saw anywhere from 2-6” of natural snow yesterday. That may not seem like a lot, but it is pretty significant in a winter like this. Here is a quick rundown of snow totals for each ski area.

As has been the case for this season (and last season for that matter), the snow didn’t quite reach the Virginia ski areas. I did see some flakes yesterday on the Massanutten cam, but no accumulations are being reported. Regardless, all of the resorts in VA are making snow as of this AM and conditions should be pretty good up that way today. 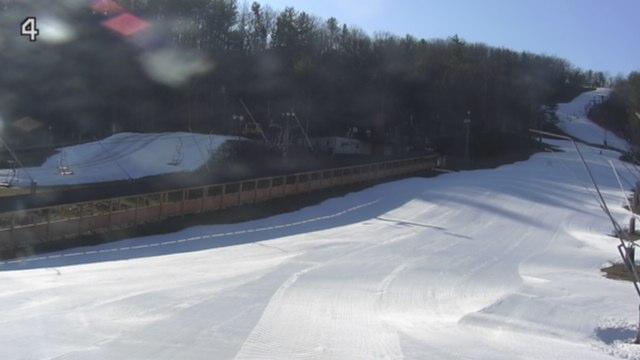 << The Bryce Resort cam is showing fresh corduroy and sunshine this morning.  It looks fun up there!

The snow also didn’t reach Ober Gatlinburg in Tennessee. However, they finally saw the mercury dip below freezing and they have been making snow overnight. I think the guys over there are breathing a sigh of relief as it was starting to look a little rough at Ober. The camera is showing continuing snowmaking this morning though and the difference from yesterday at this time is already pretty dramatic. 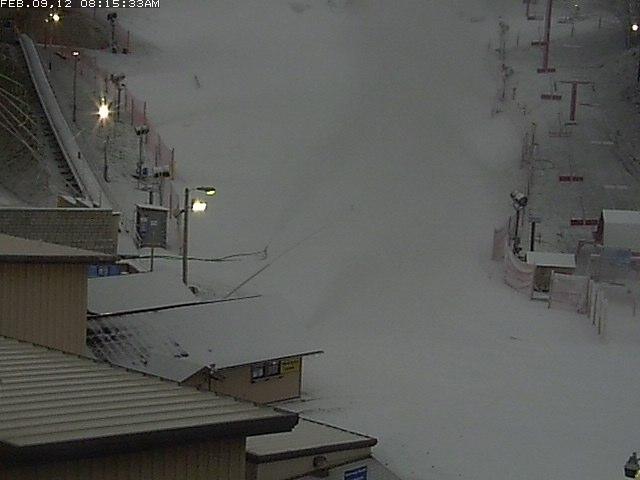 <<< The guys over at Ober were finally able to make snow once again as temps dropped into the 20’s last night.  Snowmaking continued this morning and it’s pretty crazy how much different it already looks out there compared to yesterday morning!

Snowshoe, Canaan, Timberline, and Wisp are once again the winners with this shot of snow. Four to six inches of snow fell up that way. Snowshoe posted a video yesterday showing the 4 inches that fell. You can check it out by CLICKING HERE. I’m pretty pumped for the Ski Southeast Summit up there at the beginning of March.

Here in North Carolina, Beech and Sugar both led the way with two inches. That’s not a lot, but considering those two resorts have only seen 30 inches or so this winter, it is pretty noteworthy. I was at Beech last night and I have to say, it was much better than I was expecting. The visibility was pretty minimal due to snowmaking and fog, but the snow and grooming was really good on most of the mountain. The only negative thing I have to say is that Meadows was being reported as open the past several days when in reality it shouldn’t have been. The only snow on that run was the 2 inches that fell yesterday. I couldn’t make a turn or else I would have hit grass. Other than that though, it was a great night.

I’m pretty stoked also on the fact that I scored an 80’s retro jacket from Beech Meadows Ski Shop. After I got my boots and all my gear on, I realized I had forgotten my jacket down here in Foscoe. Luckily, I was able to rent one for only 10 bucks and it was SWEET. I was rockin Charlotte Hornet colors last night and when I asked them how much I could buy it for, they told me I could keep it. Awesome!

The forecast for Snowshoe looks pretty fantastic and more remiscent of what it should be at this time of year.  >>>

Bluebird skies this afternoon combined with the natural and manmade snow should make for some fantastic skiing and riding. Temperatures are going to stay cold today though, as most places will stay in the 30’s and some won’t even get out of the 20’s. You can expect snowmaking to continue today for a lot of places and tonight for everyone. Tomorrow night and into Saturday we are actually looking at another quick shot of snow! It will be pretty similar to yesterday in that it won’t be a huge event, but it’s snow nonetheless. In general, the 5-6 day forecast actually looks like it belongs in February and not April. I’m pretty pumped to see how much things improve over the next week. You should be too.