Up to 46 Straight Days with Natural Snow on the Ground!

I began posting this morning’s update around 7:30am and I purposely intended NOT to mention the fact that we are seeing yet another 1"-3" of new snowfall around the region at various ski areas within our coverage area.

I figured since we’ve had natural snow on the ground here in the Banner Elk area for 25 straight days – yet another inch of snow was not newsworthy. We’ve seen snow fall 16 of the last 25 days here in the High Country. So another one half to one inch of snow is no longer news – right?

So I was going to ignore the snow and move on to some other stuff that we want to share today. BUT NO! It has done nothing but BOMB snow for the last hour. As much snow as we’ve seen in these parts lately, this might be as hard as we’ve seen it snow!

So here I am – AGAIN – talking about snow. That, my friends is TOO COOL.

I guess since we’re FORCED to talk about snow, again…it should be mentioned that ski areas from North Carolina to West Virginia have now received from TWO FEET to FIFTY ONE INCHES of natural snowfall since January 1st. The leaders in the natural snowfall tallies are Snowshoe, Canaan & Timberline resorts in WV all with 51" of snow in the new year began.

As impressive as our High Country snows are with 25 straight days of snow and 16 of 25 days with snowfall – David Lesher’s Canaan Valley / Tucker County, WV weather center has reported 46 straight days with snow on the ground and snowfall on 32 of those 46 days.  That record is dittoed at Snowshoe, Wisp and Winterplace Resort.

It has been THAT KIND OF COLD AND SNOWY STRETCH. It has a lot of industry insiders shaking their heads in amazement.

You KNOW we’ve gotten some GREAT weather lately when we received MORE SNOW overnight and all I want to do is talk about other things. Another 1-3" of new snow fell and it’s STILL snowing this morning. Check the SNOW REPORT for where and how much. We’re moving on to other news…

Good gracious it’s snowing hard right now at 9:30am! Good grief, I can’t get off the subject! 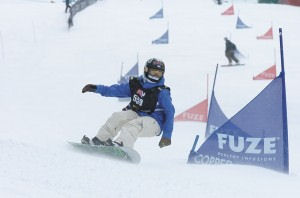 I received my copy of Blue Ridge Outdoors in the mail over the weekend and I had a few minutes to look through it last night and it was cool to see twelve year old Lindsea Lumpkin featured in the magazine. Lindsea is the young snowboarding phenom that we were introduced to about five years ago. We were her first sponsor (and we continue to do so). She began snowboarding at the age of 3, on the bunny slopes just outside the cafeteria at Ski Beech. Lindsea’s first terrain park run was at Silver Creek in West Virginia (part of Snowshoe Mountain Resort) at the age of 4. Her first competition was at The Edge of the World Series and she’s been competing in snowboarding and skateboarding comps ever since – but now on a national scale. She was the USASA Overall 2nd Place National Champ last season and finished 2nd place on December 12th, 2009 at the XBOX 360 Gran Prix Junior Jam held at Copper Mountain. Lindsea will be competing this weekend, January 16th in the Giant Slalom and Slalom at Steamboat Springs.

We wish her much success!

By the way at the USASA NATIONAL CHAMPIONSHIPS she finished:

While Lindsea rides out west most often these days, she still lists her home mountains as Ski Beech and Appalachian Ski Mountain.

She’s won 15 national championship medals since 2005, won the Gene Gillis Award for excellence in snowboarding, was invited to train at the Junior Gold Camp, earned a spot to train at the International Snowboard Training Center at Copper Mountain.

I’ve spoken with her dad, Tommy on numerous occasions and he shared that among her future plans she will ride at the USASA National Championships this season, US Burton Open this season…and the 2014 Olympics.

Don’t bet against her because she says of her most recent pro training, "You get the opportunity to be coached by the best of the best and to me that is a great honor. Training with an Olympic coach is rather intimidating at first but you get used to it, and it makes you want to do your best and land everything every time.”

IS THERE ANY WONDER WHY I LIVE WHERE I LIVE???

Those who know me well, no that I really don’t need any added reasons as to why we chose the High Country of North Carolina to call home some nineteen years ago. There are/were countless reasons. However, when looking further through the pages of the most recent Blue Ridge Outdoors mag I found the following:

According to Blue Ridge Outdoors they asked their readers to rank their favorites of the following:

FAVORITE SKI RUN: CUPP RUN
1.5 miles long. 1,500 foot vertical drop. It’s the steepest run in the region, and it’s one of the longest to boot. Sometimes it’s packed with moguls, sometimes it’s groomed for speed–either way, if you ski it from top to bottom without resting, your thighs will be begging for mercy. Luckily, there’s a cabin at the bottom that serves hot food and cold beer.

Oz was ranked 3rd even though it was not even open during the 2008-2009 season and just got open two weeks ago. It is a great run and about 15 minutes from my front deck.

FAVORITE TERRAIN PARK: APPALACHIAN SKI MOUNTAIN
Two massive terrain parks with creative features, more boxes than FedEx, more rails than Amtrak, and bigger hits than Britney Spears. And it’s all lovingly manicured by the most dedicated park crew in the region. That’s why you guys love Appalachian’s park, and that’s why this small mountain has become ground zero for park culture in the Southeast.

For the 09/10 season, Appalachian has added a Burton Progression Park, for those of us who wish we could ride park, but need to work on the fundamentals first.

Note: Brad Moretz emailed me last night at about the same time I must have been reading the magazine. Appalachian is a favorite of ours as well and I can be on the mountain in about 20-25 minutes.

BEST MOUNTAIN SUMMIT: ROAN MOUNTAIN
Roan Mountain is actually a chain of mountain summits, all of which are connected by the Appalachian Trail. The rhodo blooms purple during the summer, the cross-country skiing is borderline epic during heavy winter snows, and the elevation peaks at 6,285 feet. Oh, and then there are the high grassy balds and dense spruce-fir forests.

I can be at most of these locations within 30-45 minutes and all of them within 2.5 hours.

40: Number of major rapids on this nine-mile stretch of river.

For the biggest water, plan your trip around Gauley Season, which revs up in the fall, but don’t count the Gauley out the rest of the year. Outside of Gauley season, the river still runs, so you get the big rapids, fun creek lines, quality playspots, and beautiful scenery all to yourself.

Several local rafting companies feature tours on several of these rivers…all a half-day excursion from home.

BEST RAIL TRAIL: VIRGINIA CREEPER TRAIL
Why does the Creeper get your vote year after year? Because the pedaling is optional. The 35-mile rail trail drops 2,000 feet from White Top Mountain into downtown Damascus, and then continues for 18 more miles of flat ground into Abingdon. Where else can you ride 35 miles and barely break a sweat?

I’ve done the Creeper Trail myself and it too is just 40 minutes from my driveway.

BEST RUNNING TRAIL: MOSES CONE MEMORIAL PARK
The terrain at Moses Cone just makes you want to run: 25 miles of gently graded carriage trails, superbly manicured grounds, and elevations that range from 3,560 feet at Bass Lake to 4,558 feet at Flat Top Mountain. That’s why everyone from Olympic hopefuls to back of the packers love this place. If you only have time to run one trail, try the Flat Top Mountain, for a gradual climb and views of nearby Grandfather Mountain.

Ummm… Moses Cone is about 15 minutes from my driveway.

I could go on for a week about what makes our mountains such a great place to visit for a day, weekend, week or lifetime, but these will do for today.

Thanks the Blue Ridge Outdoors for permission to popst portions of the story here. You can read the entire story online at BlueRidgeOutdoors.com

(By the way, BlueRidgeOutdoors.com is always a great read and well worth purchasing a subscription. There’s our shameless plug.)

Another local rider, sixteen year olf Charlie Owens, was mentioned in this issue. Charlie lists his home mountain as Appalachian Ski Mountain and he finished 3rd at the Salomon Jib Academy National Finals at Mammoth Mountain, California. It was a 15-mountain tour with a stop at App (Charlie won) and a finals at Mammoth. His future plans are to move to Utah and go pro.

TOO MUCH SKIN on SKINc? (We left the "c" lower case for emphasis on the fact that our website is MOSTLY "Skin") 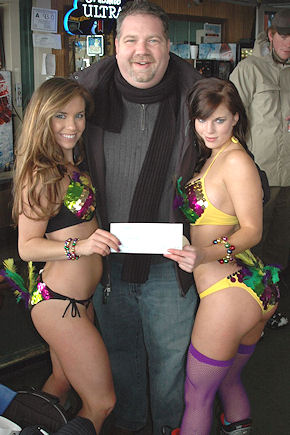 <Evidently Yankie Pete of the Ace & TJ radio show was impressed. Photo complements of AceTJ.com (this photo is dedicated to Ami as well.)

We posted the winners of Saturday’s Beech Mountain Report bathing beauty contest on the front page of the sites (both SkiNC.com and SkiSoutheast.com) and within minutes began receiving emails. Most were from guys stating the obvious! A couple were the obligatory "you shouldn’t be showing these kinds of pics on a ski site", but the funniest was from Ami B. from Atlanta, GA. She wrote, "I was there this weekend and I saw several larger framed women and a couple of guys who also braved the cold temps to ski down the little bunny slope. Where are there pics? Why only these two?"

Really Ami? Are you telling me there were OTHER ladies in the contest? There were GUYS? According to our staffers only these two ladies were on the slopes. They didn’t see A-N-O-T-H-E-R soul.

I have tons of photos to post today and I want to actually get around to checking my email from Monday which I never got to yesterday, so check back often throughout the day for new photos, videos and more.

For the snow news from all of the Southeast and Mid Atlantic ski resorts, click over to www.skisoutheast.com. Check out the Snow Report at https://www.skisoutheast.com/skireports.php  and please send us your favorite ski photos, ski videos, trip reports and comments to [email protected]

Previous Post
1/10/10 Wolf Ridge 100% Open…WHAT?!!
Next Post
Joe Stevens’ Makes Some First Turns and Finishes by telling you guys to – Keep Your Butts off my Snow!