Up to 13 inches Falls at Blowing Rock Since 1am Friday Morning! Some Ski Areas Get Nada!

We’ve covered some crazy weather this winter, but none crazier than the storm that has now left as much as 13.2" at Appalachian Ski Mountain since 1am Friday morning after another 6" fell in the last 24 hours.  The typically snowier areas around Beech and Sugar have only seen 2.6" and 5" of snow respectively.

One thing that we need to report on pronto this morning is that the roads are FINE. Secondary roads are snow covered and you will need 4WD to make it around some of the back roads, however the MAIN highways and ski resort access roads are in FINE shape.

Everyone is talking about the epic, record storm that is hitting the southeast and mid Atlantic but most of that has pushed up and into West Virginia and Maryland. Good snow fell across North Carolina but we also had some rain during the mid day hours on Friday and now it has switched back over to a steady snowfall as of 9am this morning. Forecasters are predicting maybe another 2-4" of snow for the mountains of North Carolina but nothing that will make for tough travel as the DOT crews have done a great job keeping the main roads clear. 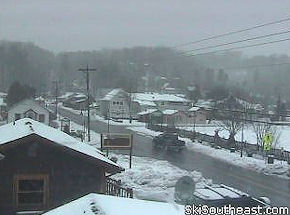 <This is a LIVE capture as of 9am Saturday morning showing snow falling yet Highway 184 is clear as a bell.

I can tell you that I’ve spoken with Joe Steven this morning and Winterplace Resort’s Terry Pfeiffer is LIVID at THE WEATHER CHANNEL for reporting on how poor the roads are up I77 on Friday and Saturday.  As soon as those reporters began claiming the gloom and doom, the cancellations started flowing according to Stevens.

"The Weather Channel crushed us", says Stevens. Actually I77 looks good today and we cover that and more over on SkiSoutheast.com today, but the point is if you’re sitting at home reading this and trying to decide whether or not to drive up – GET IN YOUR CAR and make the drive.  The main roads are clear and the ski resort access roads are in great shape.

This parculiar snow storm did some crazy things within the last 30 hours in terms of how, when and where it snowed.

(That is correct. Nearly a foot more snow fell at Blowing Rock than Beech since about 1am Friday morning through this morning at 7am!)

It’s good to see some things don’t change when I take a week away from doing the snow reports. Sapphire Valley hasn’t updated their snow report since January 30th – nor any other reporting service. I don’t know if you noticed on our snow report page that we dropped Hawksnest, Scaly and Cloudmont from our reporting and added Liberty. The way things are looking, we’ll probably drop Sapphire soon. There’s no sense reporting when they don’t care enough to inform you themselves.

There hasn’t been MANY seasons wherein Appalachian Ski Mountain receives as much snow as Beech or Sugar with their differences in elevations, but within the last two major snowstorms quite a lot more snow has fallen in Blowing Rock than at Beech and Sugar and that has App closing in on their snow totals for the season to date. Beech now has 60" and Sugar is just below that with 58.2" (they too have had more snow than Beech over the last couple of snowfalls) and App now has 56" of snow on the season.

Wolf Ridge is reportedly fully open today with all 20 trails. We’ve had several people ask us when they would be. They’ve actually been 100% many times this season so far. They just open and close trails sometimes during the day and week to preserve the best conditions.

By the way, all slopes and trails in the state of North Carolina are fully open. All are reporting great conditions for today and roads seem to be in fine shape for travel.

As of 8:25am it is snowing pretty hard here in the mountains of North Carolina! After 6-8" of snow on Friday and then some rain Friday evening, we’re seeing SNOW AGAIN! Woohoo! 2-4" is forecasted so we’re looking at SWEET conditions across the board.

COME RIDE THE MOUNTAINS OF NC THIS WEEKEND!

We invite you to click over to www.skiSoutheast.com  for all the rest of the snow reporting. There’s lots to cover today so click over. There should be some great PHOTO OPS today. Please send us your photos and videos to [email protected] .

That’s it for today. Go enjoy the snow! Check out the Snow Report at https://www.skisoutheast.com/skireports.php and please send us your favorite ski photos, ski videos, trip reports and comments to [email protected]

Previous Post
Skiing Rules shows some nice form off Tom at Sugar Mountain from this Week!
Next Post
We’re Suckers for a Pretty Face and Here’s Four of Them at Liberty Snowflex! Photo sent by David Arbor.