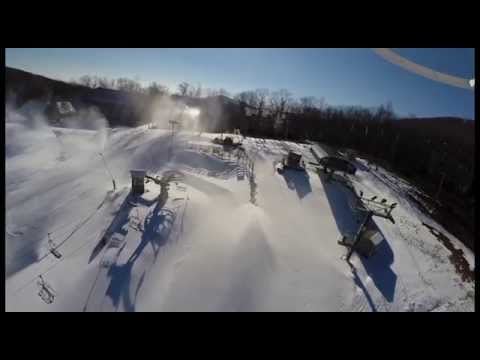 Hump Day is here and it’s brought us some more grey skies, fog, and drizzle unfortunately.  Blegh.  We got spoiled last last week with the cold and snow.  Now, it’s back to typical early season roller coaster weather conditions.

Both Brad and Herb talk about how quiet and mild the rest of the week is going to be.  The good news is that next week looks fairly promising right now as some cold and even some snow could possibly return.  It’s still a ways out though so cross your fingers!

With the warmer temps, there’s a couple notable temporary closures to mention.  Wisp announced yesterday that they are moving back their official opening day until the 13th.  They are, however, hosting their annual Wisp Benefit Day on Friday, December 12th.  For $20 you get a lift ticket as well as unlimited snow tubing, ice skating, and a mountain coaster ride.  All ticket sales to go Garrett Lakes Arts Festival.  Read more about this event by CLICKING HERE.

Canaan Valley Resort has also suspended operations for the time being.  On their site…

“Due to the warming trend forecasted over the next 10 days, Canaan Valley Resort will suspend on-slope operations in order to preserve the current snowpack. TENTATIVE RE-OPENING DATE is Saturday, December 13, 2014!”

To be honest, this doesn’t come as much of a shocker to me.  I wouldn’t be surprised to see some others do the same as the next several days just don’t look too great.  Blegh.  I’ll make sure to keep you guys updated throughout the week as that information comes out.  As of right now, Wintergreen, Massanutten, Bryce, and Winterplace MIGHT open Saturday depending on the weather.  That could easily change though.  Beech, Sugar, Cataloochee, App Ski Mtn, and Snowshoe continue to do their thing and operate on a daily basis.  In all honestly, all of those open resorts look to have a pretty good base from what I see on the webcams.  Nothing to worry about just yet.

I can’t leave on a bad note like that.  So here’s an opening weekend video from Wintergreen.

I vow that I will make it up there this year.  My friends rave about it and it just looks like a cool place to go riding.  Oh yeah, I forgot to mention that I shipped another webcam up to those guys the other day, so they’ll have another streaming cam in the coming week or so.  Woo!

That’s it for today.  Stay positive!