Today is a Date That Will Live in Infamy 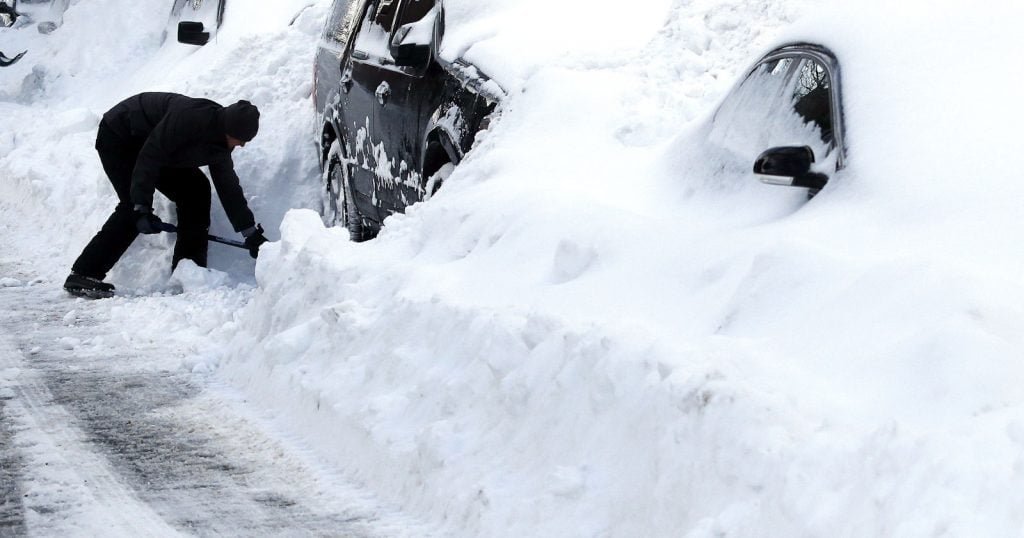 Check the SNOW REPORTS  for all of the details as some ski areas are only operating for DAY SESSIONS the rest of the way.

Wolf Ridge Ski Area is now closed for the season and Ober Gatlinburg will call it quits at 10pm this evening. Sapphire closed last week.

I KNOW that I shared The Weather Channel’s forecast yesterday for colder air to return later in the month, but as far out as I can see (March 24th) the highs and lows should be about normal with highs in the 40s and lows in the mid 30s even for colder-than-most Snowshoe Mountain. I’m seeing highs around the High Country of Banner Elk in the 40s and 50s with lows in the mid to upper 30s throughout the period.

Maybe we’ll hear from meteorologists Brad Panovich and Herb Stevens to bring us up to speed on that. When we do, we’ll share it with you guys.  For now though, the ski resorts look pretty good. We ARE seeing some resorts reporting “Spring Conditions” which is usually indicative of some thin coverage and some bare spots. However, we’re not seeing evidence of that on the LIVE SKI CAMS

This IS a really nice time to ski or snowboard though because the snow will be soft and fast…and easily carvable.

TODAY IS A DATE…THAT WILL LIVE IN INFAMY… 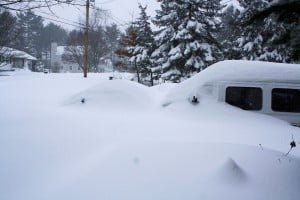 Today is the day twenty two years ago that the great Blizzard of ’93 disapated and left behind up to 44″ of snow and snow drifts as high as 14 FEET!

You can click the image to the left to see a Dodge Van that was nearly buried in snow.

I’ll never forget that forecasters were talking perhaps 3-4″ of snowfall on that Friday. I was driving a 1987 5.0 Mustang GT with a ground effects package (low to the ground) because I figured with THAT little bit of snow, I’d be fine. At that time our other vehicle was a Suzuki Samurai 4×4 which was like a mini-jeep and that thing had “cat climbing” skills. Unfortunately I believed the forecasters.

I had been traveling down to Columbia, S.C. and was on my way back and called my wife to see how things were. She informed me that we had already received 4″ of snow and that the forecasters were calling for MAYBE another 2-3″.

I called another hour later and she said that another 4″ of so had fallen and that NOW forecasters were saying that we COULD get another 3-4″. We were living up on Seven Devils at the time, so I began to get concerned. Since it was Friday afternoon I KNEW the roads would be okay as road crews were all over them that early on.

When I got into Blowing Rock there was a good foot of snow off the roads and perhaps 4-5″ on them. I DID slide off the road once, but managed to get to my home and up a short, but steep driveway.

That was the LAST TIME I saw my Mustang for about a week as that forecasted 4-5″ of snow became 44″ in my front yard. Drifts were so deep that my Mustang wasn’t seen for several days. Those weather peeps had continued to call for another 4-5″ at least a few more times before finally throwing their hands in the air and saying, “Hunker down as this is a big one!”

I remember clicking on my skis to hit my front yard and after only a few feet I tumbled over head-first and I can tell you that I was buried in snow so deep that I had a hell of time figuring out which way was up. I had inhaled some of that powdery snow and it was a while before I could get out.

It snowed HARD all Friday evening, ALL day Saturday and finally around mid-day on Sunday, things eased up. When all was said and done, there was so much snow that people were out DAYS later, walking the roads down Seven Devils with long poles to stab down into the snow to determine where the road WAS. We had a procession of vehicles following those volunteers down the switchbacks until we could get to Hwy 105.

Though the storm was forecast to strike the snow-prone Appalachian Mountains, hundreds of people were nonetheless rescued from the Appalachians, many caught completely off guard on the Appalachian Trail, or visiting cabins and lodges in remote locales.

We witnessed people who were up for a ski getaway, walking Devils Lake Drive to see if anyone had canned goods or ANYTHING to eat. It was nuts to say the least. GREAT, but nuts nonetheless.

As I said, we had drifts more than 14 feet in our yard and we saw snowdrifts ON ROADWAYS so deep that the Seven Devils fire department snow plow couldn’t get down Devils Lake Drive. Snow was more than 4-8 feet deep in spots ON THE ROADS.

OFFICIALLY drifts up to 14 feet were observed at Mount Mitchell. Snowfall totals of between 2 and 3 feet were widespread across northwestern North Carolina.

Boone officially reported 36″ plus of snow and 24 hours of temperatures below 0 °F. Wind gusts at Boone were reported as high as 110 mph.

One of our current staff members was living in Florida at the time and he said that he had called up to some friends in Blowing Rock and told them that the moisture and heavy winds were “on their way to the mountains”. He said that lightning strikes and heavy rain in Florida was impressive.

Electricity was not restored to many isolated rural areas for up to three weeks. Nearly 60,000 lightning strikes were recorded as the storm swept over the country for a total of seventy-two hours, and many may remember their local news organizations touting the term “thundersnow.” As one of the most powerful storms in recent history, the storm has been described as the “Storm of the Century” by many of the areas affected.

It was DEFINITELY the STORM OF MY LIFETIME!

Many of us who witnessed that snow first-hand have tons of stories that we could share and perhaps we’ll try to get some of those stories for another post another day…or year.

HERE ARE SOME NOTABLES FOR TODAY.

The Park Crew will be setting up fun new features in the Appaljack Terrain Park over the next couple days for the event. There will be something for all abilities, both skiers and snowboarders!

Registration will be from 9-11:30 in the Alpine Ski Shop, and the park session will begin around noon. As always, this event is FREE with purchase of a ski ticket.

In the spirit of St Patrick’s Day, riders Must wear green to participate!

This will be the third season of the Park Jam, be ready for some fun features and some AWESOME prizes for standouts.

Sugar Mountain Invites All to Join them for Easter…today.

Dress up in your Easter costume and join Sugar Bear and Sweetie Bear on the slopes in search of prize filled eggs. You may be the lucky winner of a 2015-2016 season pass hidden in the grand prize egg! Or be one of the three contestants awarded a prize for most creative, imaginative and colorful costume. Valid lift/slope tickets or passes are required for participation. Event is for children 12 and under ONLY and begins at 9:00am at the bottom of the Summit #1 lift. Please call for additional details.

Massanutten is Giving Free Skiing to the Military today.
HEROES ON THE HILL TODAY, FREE SLOPE USE TICKET WITH MILITARY ID.

Several ski areas are only open for DAY SESSIONS the rest of the way. There are a few places open for night skiing and snowboarding, but you’ll need to check the SNOW REPORT for that info.

For you Omni Homestead fans – we have not received reports for the last two days so we would suggest calling ahead to insure that they are open and what the conditions are.

That’s it for today people. Enjoy this Spring day… email me if you like at [email protected]