Three Resorts Are Open! Snow and Snowmaking Weather Coming in! 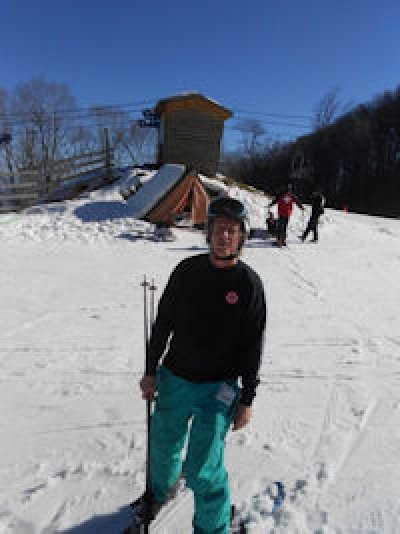 Three ski resorts remain open in the region for today. We'll get to those current conditions in a moment. THE TOP NEWS for today is the fact that we'll probably see some SNOW in the forecast for tonight and perhaps more importantly, we'll see SNOW MAKING temps! 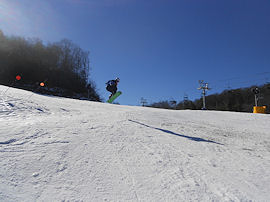 <DavidSki from the messageboard took this image at Cat of his nephew, Dylan getting some air on Thursday!

Cataloochee Ski Area – 42° – 3 Trails open with 2 lifts and an 8-18" base of loose granular with some thin areas. Cataloochee is open for day skiing and snowboarding AS WELL AS NIGHT SESSIONS!

Modified holiday rates of $50 for adult and $40 for juniors for day or twilight skiing and $25 for either adult or junior for night skiing.
CAT TRIP REPORT
Thanks to DavidSki over on the messageboard for posting today's featured TRIP REPORT. David got in some early turns during the Sandy storm at some unopened ski areas so we won't elaborate there 😉
However CAT was open on Turkey Day and he posted this nice photo and trip report.
http://www.skinorthcarolina.com/messageboard/showthread.php?t=15478
David – THANKS TONS MAN for repping the shirt dude! You guys should go have a look at the photos and comments! Cat looked GREAT! 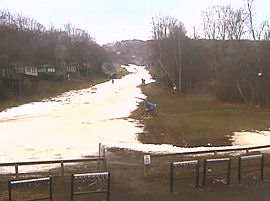 Sugar Mountain – 37.7° – 2 Trails open to the 3/4th station serviced by 1 lift on a base (that hasn't changed in three days) of 6-26" of variable granular with thin areas and bare spots. No night session at Sugar for Friday.
A lot of people bark about Sugar's lift ticket rates, but they are offering the opportunity to play today for the following cost:
Special early season rates for Friday, November 23, 2012:
Adult Full Day $30
Child Full Day $25
Adult 1/2 Day $25
Child 1/2 Day $15
Their is also some light snow showers in the forecast for tonight and into Saturday at Sugar and Beech with temps nosediving down close to the upper teens.
YA WANT SOME TUBIN'? 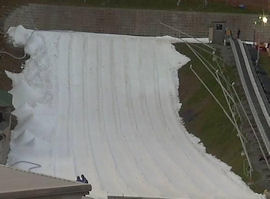 Right now Ober Gatlinburg is the only ski area offering snow tubing. One look at the tubing hill will tell you that they are ready to offer some sliding fun!
Friday & Saturday, Nov. 23 & 24 ~  $25 per person, per session
Ticket Sales Open at 8:00 A.m.
friday's sessions:
9:00 am
11:00 am
1:00 pm
3:00 pm
5:00 pm
7:00 PM
Available sessions friday & Saturday:
9am, 11am, 1pm, 3pm, 5pm & 7pm ~ $25 per person, per session
Don't forget that Ober also offers the region's BEST ice skating rink indoors and there are great shops, restaurants and plenty of seating for those who just want to watch!
Beech Mountain Resort – I spoke briefly with Talia Freeman and she shared that Beech WILL be making snow once the temps drop and they are HOPING to get enough snow down this weekend to open sometime during this week ahead.
The Cold is Coming…but…
It is 38° at the summit of Sugar this morning. 43° at the base.
According to the forecast around here, today should be close to 60° (57 or so) and then later this evening comes the cold air invasion. That's none too soon for Sugar Mountain as their base was only a day or perhaps two away from not allowing them to stay open. On Thursday they has one, small, six foot wide strip of snow that connected the base over to the lift station at the bottom. Otherwise things were decent for those wanting to get on the snow for their first time this season.
Lows tonight around Sugar are meant to drop to 24° and then we may see some around-the-clock snowmaking for the first time this season as highs on Saturday should hover around 32-34°. Saturday night should get down to 20° and then after some moderation of temps on Sunday, the lows Sunday night should allow for some additional snowmaking with lows around 24°. Monday looks to be a non-snowmaking day OR NIGHT and then Tuesday night things look to be cold enough to make snow again. Wednesday and Thursday look unseasonably cold with snowmaking ops again both nights and perhaps even during the day on Wednesday.
So that's SIX of the next SEVEN or EIGHT nights that should provide for snowmaking. That's all the ski area's need to get some decent base depths down and make for some openings for additional slopes AND additional ski resorts.

That's it for me today my friends. If you're reading this, do me a favor if you would. If you're on Facebook or Twitter – would you do us a favor and share our Facebook and Twitter content pages with your snow loving friends. We're going to be doing some sweet contests this season along with the 25 days of Christmas giveaway where we will be giving away lift passes every day of the month through Christmas Day. We'll have some vacations to give away as well so to get the BEST chances to win, follow us on Twitter at www.Twitter.com/Skisoutheast
If you'll tweet your friends to follow us we can build up a great following to join us for our Summits this season. We'll be announcing those dates and locations this week as well.
Drop me an email if you like at [email protected]
Previous Post
Happy Thanksgiving from SkiSoutheast and ResortCams.com
Next Post
APPALACHIAN SKI MOUNTAIN OPENING DAY PLANS