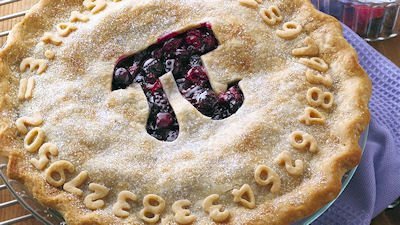 Will these mild temps last? NO, says The Weather Channel. More in a bit.

The BIGGEST news of today is the fact that it is Pi Day for the first time in 100 years.

We’ll celebrate it by talking numbers…

Scroll down to read more of my FirsTrax Mountain Blog…but I HAD to show you this kid who recited 2522 numbers of Pi:

BACK TO OUR REGULARLY SCHEDULED PROGRAMMING…

It’s been raining, raining and raining for the last 24 hours and yet resorts only dropped their base depths anywhere from NOT AT ALL to Sugar’s 2″ of base drop and Ober’s 4″ of drop. They are all sending the message that there’s plenty of snow to ride and that their season is still in full-operational mode. If they were to show any significant drop in base numbers that might tell potential visitors that things are “fading fast”.

Interestingly, Wolf Ridge (which IS CLOSING after today), is showing a drop of 15″ of base depth.

We’ve posted the expected/announced CLOSING DATES for each resort on the SNOW REPORT. You can check those out…and I’ve also detailed them in today’s tour of the region below.

Sapphire Valley is already closed for the season and Wolf Ridge is calling it quits after TODAY. Other ski areas (see the report below) are skiing and riding until March 22nd; and some are playing until the 28th, 29th and April 5th.

According to the NWS we’ll see another few days of mild weather and then Winter will come in for at least one more round of cold air that will resemble late February with temps 5-15° colder than normal – BEGINNING late next week and through the end of the month. 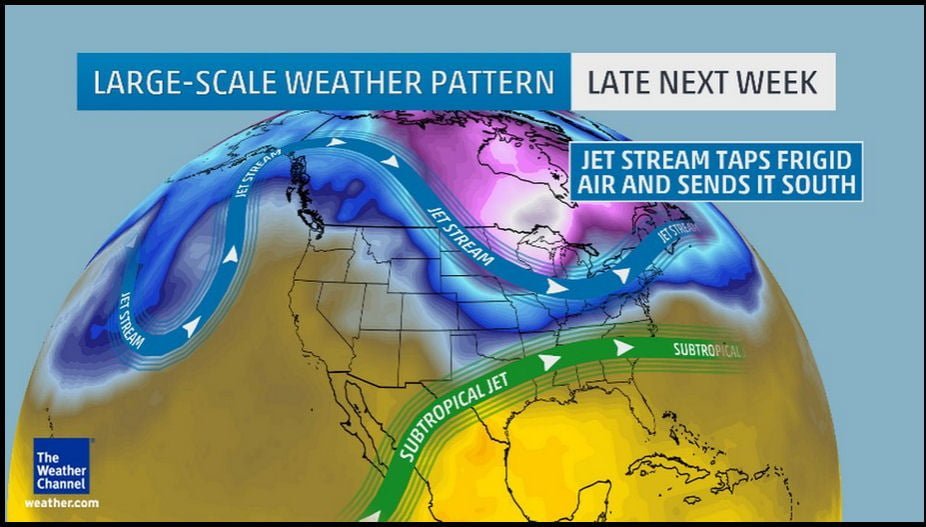 While looking around the LIVE CAMS at www.ResortCams.com I’m seeing LOTS of good, side-to-side snow coverage and very little in the way of Spring Conditions – except that with the mild temps and rain that is falling this morning…it WILL be very slushy, wet and Spring like. With temps in the low to mid 40s IT WILL BE RAW if you’re a diehard who is weathering those conditions.

Per the announced closing dates…it LOOKS like the traditional statement of “Weather Permitting” should be good to do with the forecasted colder temps returning late next week…just in time to firm up the snow and allow resorts to do some maintaining.

The crazy thing is that for the resorts out west and even in Idaho…things have been CRAP for them and those of us in the Southeast and particularly the Northeast have been in great shape.

So it LOOKS like we should see a nice “finishing kick” for this 2014-2015 ski and snowboarding season. If you haven’t hit the mountains yet…you’ve got some limited opportunities ahead – so make plans to get in a day or two on the slopes before it’s all over.

HERE’S MY TOUR FOR TODAY…

Snowshoe – Riding on 57 of 60 trails and will stay open through April 5th.

They posted:
Don’t let this rain put a damper on Spring Break! The festivities continue today with the Ballhooter Beach Bash at the bottom of Ballhooter lift from Noon-3; Icicles & Bicycles on Skidder at 5:30 (registration at the MAC); Battle of the DJ’s Finals in Shaver’s Center; and FREE live entertainment tonight in the Connection from the Mowgli’s & Simplified! Shows start at 9, must be 21+.

For more info on all of our Spring Break fun check out our website at snowshoemtn.com/Ballhooter

SPEAKING OF SNOWSHOE – Have you guys seen this pass??? 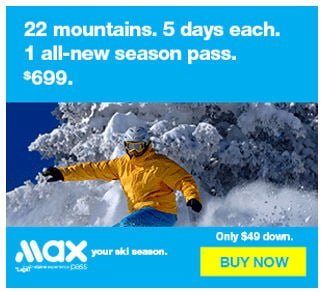 The Multi Alpine Experience (M.A.X.) Pass is a brand new, groundbreaking ski pass giving access to 22 mountains all over North America. M.A.X. Passholders will get 5 days of skiing or riding at each of the 22 participating resorts for the 2015/2016 ski season:

There are no blackout days on this ski pass, so you can hit the slopes whenever you want, however you want. Take a long weekend trip, hit the slopes for a single day, or take one long winter vacation. Guests who purchase the M.A.X. Pass can ski 5 days at each of the 22 participating ski resorts, for a total of 110 days of skiing at North America’s premier mountain destinations.

M.A.X. Pass is valid for the entire 2015/2016 season, from opening date to closing date at each participating resort.

Here are THE REST…

Appalachian – 100% open. Closing March 29th and then closed for the next week and then re-opening Saturday, April 4th and open Easter Sunday as well. Then closing for the season.

Canaan Valley – They are playing on 32 of 44 trails today and they say that their Last day of the season will be March 29th.

Timberline – Open with 31 of 40 trails and will make THEIR last day of the season March 22nd.

Winterplace – 100% open and they are open for night skiing tonight but that will be their LAST night session of the season. Right now they don’t HAVE a closing date, but will ski and ride through at least March 22nd.

Beech – Everything is open except for the Oz Run and Ice Skating. No word yet on a “closing date”. Beech tends to make a decision “in the moment” depending on the weather and attendance.

Cataloochee – 16 of 18 slopes open. There will be no night skiing for the rest of the season.  Will ski on a daily basis until March 22 and make a decision on additional operations at that time.

Sugar – 20 of 21 trails are open. Ice skating is closed for the season. Easter egg hunt on the slopes tomorrow, March 15th. Dress up in your Easter costume and join Sugar Bear and Sweetie Bear in search of prize filled eggs. You may be the lucky winner of a 2015-2016 season pass hidden in the grand prize egg!

Per a closing date for Sugar – that is a closely guarded secret that only THE MAN himself (and perhaps Kim) knows. Weather permitting of course, Sugar should be open at least until March 22nd but COULD go until March 29th or April 5th. The most logical day (as of now) would be March 29th.

Wolf – Dropped 15″ in base depth in the last 24 hours and they are calling it quits on the season AFTER today’s sessions where they will be riding on 11 of 15 trails for DAY SESSION only.

Bryce – Their FRONT page is proclaiming that TODAY is the OPENING DAY for the season. Bryce is riding on all 8 slopes and they are hosting their winter fest and Polar Plunge today. Bryce seems ready to ride until at least March 22nd with a possible closing date of the 28th.

Massanutten – They are 100% open and open for night riding tonight as well. Mass plans to ski and ride through March 22nd (their last day of the season).

Sapphire – Already CLOSED for the season.

Whew!  Email me at [email protected]