There’s GOLD in them there hills!

The NC Ski Areas Association recently released their second economic impact study that states that the North Carolina based ski areas creates a $146 Million dollars for the local communities.  We’d argue perhaps that they do more than that!

Another study performed by The Center for Integrative Enviromental Research (CIER) at the University of Maryland stated that, "The skiing industry in Western North Carolina generated $23 million for 2002-2003 year alone. The direct and indirect impacts for skiing and related activites in the state for the same years totaled to about $120 million and comprised a total of over 100,000 jobs.

During that same season the NCSAA released its first economic impact study which was based on a season wherein 540,000 skier visits were recorded for the NC ski area resorts. At that time North Carolina had seven ski areas operating and they employed 84 year-round, full-time employees. During the winters they employed over 900 full time employees and 800 partimers. According to that study the annual payroll for those people totaled seven million dollars.

Then the study extrapolated the TOTAL economic impact from direct and indirect influences and came away with the findings that the total economic impact for that season was $120 million. Admittedly your’s truly kind of balked at those numbers back then. However, I’ve come around to thinking that perhaps these studies are a bit on the conservative side.

I remember at that time thinking, "I’d sure like to take my family on a ski getaway and only spend $122 per person for the trip. Obviously that was not accurate thinking, because the study based a skier visit on lift tickets PER DAY. So if my family of four went on a five day trip, then my contribution towards the "impact" was $2440 for that week. Obviously a lot of families spend quite a lot for a weeklong getaway, but then there’s a ton of skiers who are making day trips and spending nothing more than the monies for a lift pass and a beer or two. In my time reporting over the last 14+ seasons I have become privvy to plenty of people who have spent more than $15,000 for a weeklong getaway and I know plenty who have slept in the back of their car and spent no more than $200 for a couple of days on the snow.

The NCSAA’s most recently released study states that the NC Ski Indutry’s economic impact during this past 2009-2010 season amounted to $146 million.  Click here to see the study

The study reported that while most of the NC ski areas do not own or operate lodging accommodations, that the industry is responisble for many overnight stays in local commercial lodging and private accommodations. (No question about that!)

Scroll to the bottom of this story for some detailed charts that support the NC study. According to the report the average ski visitor spent $131.70. Again – using that number if a family of four spent five days they’d spend $2,634. While some would argue that they’ve never spent that kind of money – I can assure you that tens of thousands of skiing families easily spent three to four times that figure last ski season for a single ski getaway.

The latest NCSAA Economic Impact study estimates the total impact at around $145.9 million dollars or a 4.4% percent INCREASE per year.  AGAIN, I think that perhaps their numbers are skewed a bit LOW. I’m having a hard time envisioning me taking my family of four to ski, stay overnight, have a nice dinner and ski and play and only spend $800 for the one day trip by the time gas, snacks, breakfast, lunch and dinner and everything is figured in.

Regardless the numbers are not too bad for a bad economy, huh? This study sure supports our statement last season about "snow trumping a bad economy".

This past January 7th we posted a story (see link) showing where Governor Manchin of West Virginia and the state’s ski industry leaders shared that the state’s five resorts, Canaan Valley and Timberline in Tucker County, Oglebay Resort in Ohio County, Snowshoe Mountain in Pocahontas County and Winterplace in Raleigh County, experienced over 800,000 skier visits. The economic impact from the five-month long industry was over $250 million, employing 5,000.

The Governor was quoted saying, “The recent Christmas and New Years holidays (2009-2010) were great for of the resorts, with many experiencing record visits.” Over 250,000 skier visits occurred in West Virginia during the holiday period.

So the impact to the local communities simply not only can’t be denied…without the ski areas many of these communities and certainly a lot of local entrepreneurs simply wouldn’t make it.

To my knowledge no study has been performed that included ALL of the Southeast and Mid Atlantic’s ski areas. However simply by using a little logic, we can take the West Virginia and North Carolina studies and make some assumptions about Virginia, Tennessee and Wisp’s contributions to the economies of their communities. A figure of more than one-half BILLION DOLLARS would be reasonable. With NC and WV resorts generating $396 million, it would be pretty easy to figure that $550 Billion dollars in economic impact would be a reasonable number.

I doubt that the ski area’s founding fathers would have ever dreamed of those kinds of numbers. You can almost see a smile on old Doc Brigham’s face. 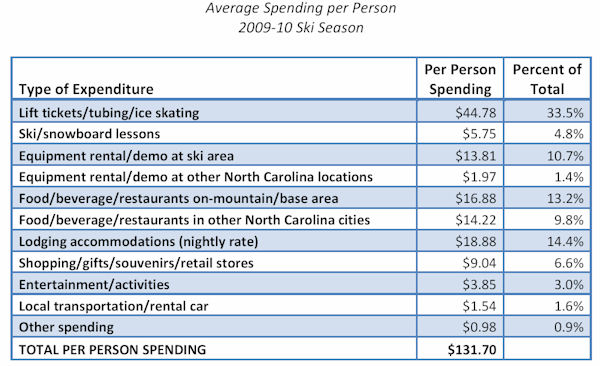 In closing, we’ve read some of the messageboard quotes that seem to argue that investors would be foolish to start up new ski areas in the region – citing that any such investor would lose money. We’ve received tons of emails from some people rumoring that they were exploring reopening Hawksnest or opening a new ski area in West Virginia and elsewhere. Many claim that such a venture would doomed for failure. Obviously the 17 ski areas located in the Southeast and Mid Atlantic say otherwise.

We’ll be posting some related stories reflecting the investments that the ski areas have made over this past summer. Until then..that’s our two cents for today. (Pun intended…)  There IS GOLD in them thar hills!

Be sure to check back often for more photos being posted as well as our video blog. If you have not yet visited our Ski Messageboard Forum you should do so.

We’ll be sharing TONS more input about our plans for this season, but for a little sneak peek visit:

Previous Post
Snowshoe Offers a SkiSoutheast.com Discounted Lodging Deal!
Next Post
The trickle down economic benefit of a ski resort is discussed in today’s FirsTrax News