The Race to be the First Southeast or Mid Atlantic ski resort to open may come down to the wire!

…and we may have a photo finish!

We’re still getting reports of some light snow here and there around the region but we’ll wait until Saturday morning to post updates that we receive. We had a few people email and call us this afternoon and several "informed us" that Sugar would be opening Saturday at 9am. We got a little caught up in the excitement after looking at the webcams showing all the snowmaking going on. On top of that we had a few people come in the office after lunch and tell us how hard it was snowing up around Banner Elk and Sugar.

Actually we were able to go in on Mr. Kennedy’s LIVE cam at the slopeside of Beech Mountain and there was considerable snow on his deck (by considerable we’ll say maybe an inch). 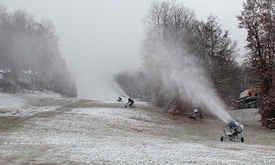 <A 5pm Photo shows a lot of work yet to do to be able to open for skiing and snowboarding!

I was heading out of town for the weekend and decided to make a stop by Sugar Mountain to get some video (I’ll post that AM Saturday) and some photos. I was a bit disappointed at the fact that there was very little in the way of any accumulation at the base entrance to Sugar (a dusting at best) at around 5pm. I walked up to the base of the slopes and captured some video and this photo to show that as of 5pm Sugar was still quite a ways from having anything resembling a base depth for skiing and riding on Saturday morning.

Of course Sugar concentrated on the upper portion of the mountain as they usually start with (around the 3/4 station). However there was little more than just a dusting at the bottom from about the beginning mid-station lift ramp and down. Obviously the temperatures were not as cold as they needed to be at the base even though we saw a temp sign displaying 31°. We think it was a bit warmer than that, but with temps dropping Sugar and Cat both should be able to blast away all night long. I know I’ve seen Sugar put down enough in one single night to open the next day and with some natural snow squals forecasted – along with good snowmaking temps – we’ll probably create some smiles on snow lover’s faces everywhere Saturday morning with the announcement that Sugar and/or Cataloochee are open.

We’ll get you word as soon as we know it and Cat Marketing Babe, Tammy (I love you) Brown promised to make me her first call to announce the opening with us before any other media service. Of course, knowing some of our messageboard peeps (some are Cataloochee ski patrol!), some of you may know of Cat’s announcement before we do 🙂

I have to relate this weather anomaly that I witnessed today. As mentioned before I was at Sugar Mountain at 5pm and it was snowing pretty nicely and the temp was hovering around 31° or so. I left and headed down Hwy 221 towards Linville and literally two miles down the road as you arrive at the entrance to Grandfather Country Club – the sun was shining, there was NO SNOW falling or on the ground and the temperature was 36°. Only minutes further down the road, the roads were dry as a bone and it was a gorgeous autumn day. Back at Sugar there was NO breaks in the clouds whatsoever and yet minutes down the road it was mostly sunny with only a few clouds and milder temps.

By the time we made it to Marion it was 52°. These mountains create their own weather systems at times and the peaks sure know how to hold onto the cloud cover and drain all of the moisture out of each and every cloud!

Stay tuned for an early report Saturday as we THINK we’ll be making some announcements.

Be sure to check out www.SkiSoutheast.com  for more news and stories for all of the Southeast’s ski areas.

Be sure to email photos, snow reports and comments to: [email protected]

Previous Post
BLACK AND WHITE FRIDAY AROUND HERE IN SKISOUTHEAST LAND!!!
Next Post
Snow Continues to Fall Across the Region!