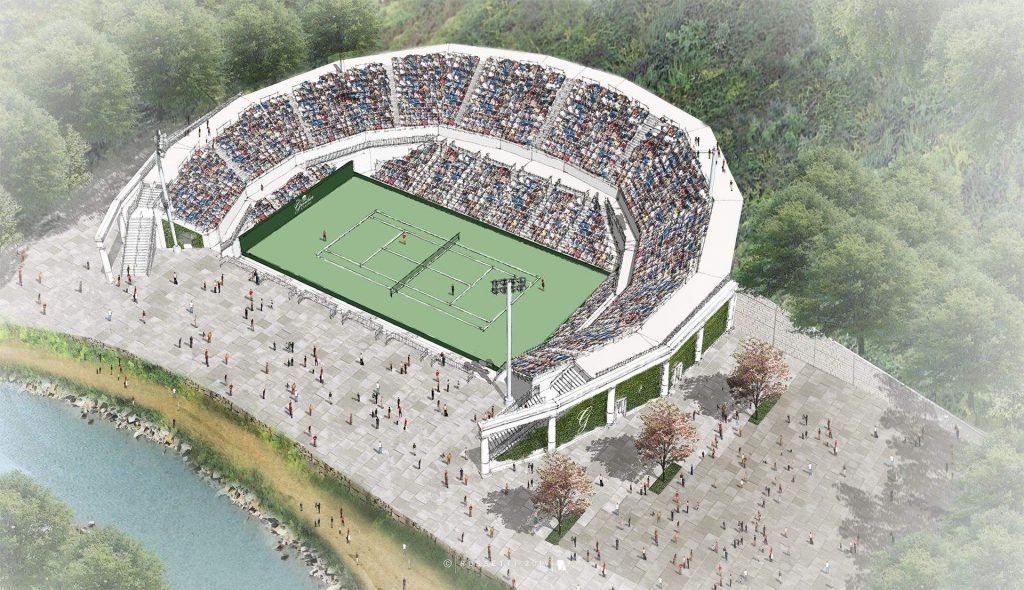 (Official Press Release from The Greenbrier from September 4, 2014)

White Sulphur Springs, WV – September 4, 2014: The Greenbrier, the iconic destination resort set on 10,000 private acres in the foothills of West Virginia’s Allegheny Mountains, announced today that it has broken ground on a new state-of-the-art, 2,500-seat tennis stadium, to be unveiled in June 2015.

Set on the banks of Howard’s Creek on the resort’s grounds, Center Court at Creekside is a 46,000-square-foot tennis facility designed by Detroit-based ROSSETTI architects.  The stadium will be built in a unique U-shaped bowl configuration to maximize the sweeping views of the creek, the historic Old White TPC championship golf course (home to the resort’s annual PGA TOUR FedExCup event, The Greenbrier Classic) and the Allegheny Mountains beyond.  The design also allows for a multi-functional plaza between the creek and the stadium court, which can accommodate courtside hospitality tents and additional grandstand seating.

The new Center Court at Creekside will be equipped with up to 400 corporate loge seats, professional-grade lighting and broadcast-ready camera areas—making it the ideal venue for premier tennis events such as The Greenbrier Tennis Champions Classic, which kicks off its third annual tournament on September 20 and 21, 2014, featuring Greenbrier Tennis Pro Emeritus Pete Sampras alongside John McEnroe, Andy Roddick and Ryan Harrison.

“It’s been a real pleasure to match the rich sporting heritage at The Greenbrier with a unique professional-level stadium to enhance the tennis viewing experience for patrons,” said Matt Rossetti, President of ROSSETTI.  “The beautiful natural setting is a real asset to the design that we don’t normally encounter.  It will be a stand-out experience for Greenbrier guests and players and will continue its tradition as one of the finest sporting resorts in the U.S.”

“We are so excited to be able to take the already top-of-the-line tennis facilities at The Greenbrier to a whole new level,” says Jim Justice, Owner and Chairman of The Greenbrier.  “With folks like Pete Sampras as our resident Tennis Pro Emeritus and such legends as Tennis Hall of Famer John McEnroe and former World #1 Andy Roddick as our guests, it was only right that The Greenbrier should have the premier resort tennis stadium in the US to call its own!”

For more information about The Greenbrier resort and its collection of world-class sporting, dining and spa facilities, please visit: www.greenbrier.com.

ABOUT THE GREENBRIER:
Located in White Sulphur Springs in the Allegheny Mountains of West Virginia, The Greenbrier has been welcoming guests since 1778. Known as “America’s Resort,” it encompasses more than 10,000 acres of undulating landscape that includes: four golf courses (including the exclusive Greenbrier Sporting Club’s private course); a championship indoor and outdoor tennis facility (including five outdoor clay courts and five indoor courts); The Greenbrier Clinic (specializing in executive health); a 40,000-square-foot spa; a mélange of sporting activities; shops; private homes at The Greenbrier Sporting Club; guests-only casino; and, at its heart, a vast and imposing grand hotel. Purchased in 2009 by West Virginia entrepreneur James C. Justice II, The Greenbrier has undergone a $250+ million restoration and is now home to The Greenbrier Classic, a PGA TOUR, FedEx Cup event, and will soon launch The Greenbrier Medical Institute, a state-of-the-art medical complex on
the resort’s grounds.