The Bluebird after the Storm

It is going to be a FABULOUS day on the slopes today!  The storm that left up to 8” of powder on the slopes has moved on and left plenty of sun in its wake.  There are a few clouds this morning on the web cams, but they should break up as the sun does its magic.

And JEEZ – there’s a BUNCH OF SNOW out there.  The operating mountains are near or at 100% open right now with some of the best conditions of the entire year.  What a way to see this season off!

Most of you have heard by now, as we shared it on our Twitter feed yesterday or you just got it from the news, that the upper lodge at Wolf Ridge burnt to the ground early Wednesday morning.  The lodge was completely destroyed by a fire that started around 1:30 AM. 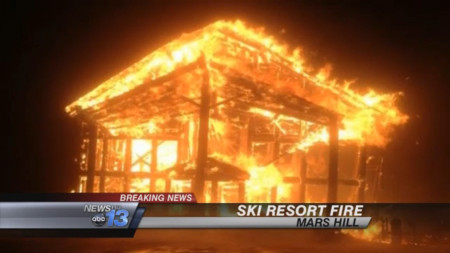 I don’t even know where to begin – I mean, really!  Wolf Ridge has had more drama this season than any of the daytime stories my Grandmother watches on TV.  First there were rumors that the rumored purchase from last season had actually gone through.  Then there was the fallout of that and the transference of 100% ownership back to Orville (there’s a little more to that story, but I’ll spare you).  Then last week some windows were broken out of the upper lodge, which was reported to the sheriff’s department, and then we wake up yesterday to the upper lodge in full flames.

The snow we’ve been praising these past couple of days really worked against the fire department as they had all kinds of problems getting their trucks to and from the upper lodge.  The fire department had to call the DOT to come and scrape and salt the road just so they could get up there to address the fire.  The snow prevented the fire from spreading, but the delay it caused in help getting up there sealed the lodge’s doom.

Given the broken windows of last week, the sheriff’s department is investigating this rather than the fire marshal.  Wolf has been in the First Trax this year just as many times as any other resort, but rarely do we actually get to talk about the conditions on the slopes.

I guess all I can say is stay tuned – more is bound to come up, just wait.

Ok, so the cat is out of the bag now.  Check out this story from the Asheville Citizen-Times.

I want to give you guys a bit of a heads up as to what is going to happen next week.  All of our member resorts are open for some or all of this weekend, and for many this will be their last one.  However, Snowshoe and Wintergreen will open up again for one last ballyhoo next weekend.  With the resorts being closed during the week, there’s not much for us to talk about so we’ll take a little bit of a break with the First Trax updates.  We’ll come back on Friday to give you a heads up of what to expect for the weekend and then start winding down for the season the following week.

It has been a GREAT season and this week rivals any week we had in January or February.  I hope you’re able to get out for those final turns.

Previous Post
POW And Blue Skies – What Are You Waiting For?
Next Post
Incredible Conditions at Wintergreen!