The Best of Times… 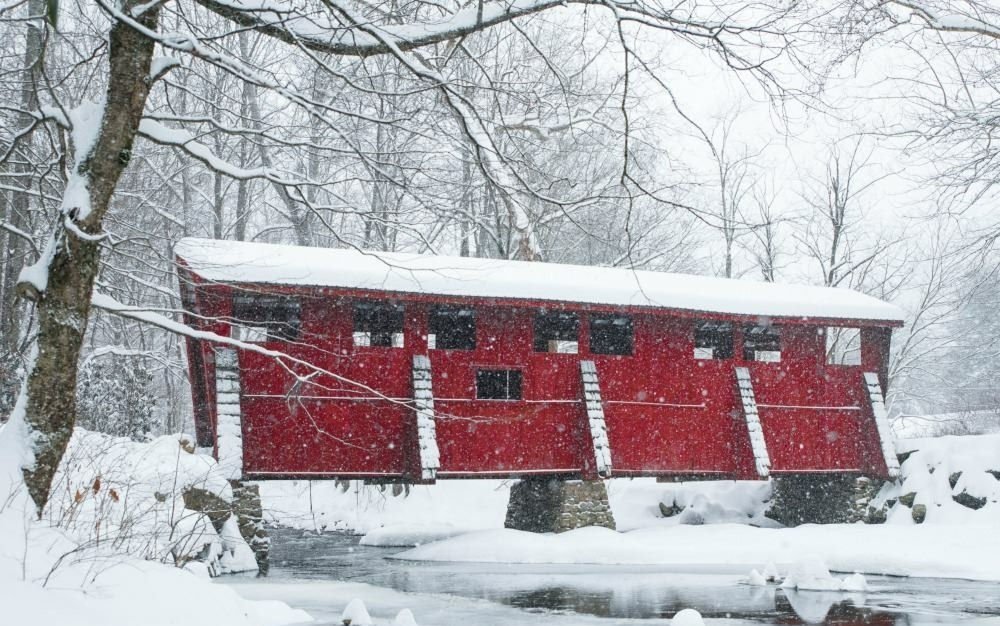 (The Photo of the Day, above and at the end of this post is of the Sleepy Hollow Covered Bridge at the entrance to my neighborhood. It was taken Sunday by photographer, Sallie Woodring.)

Monday was ‘one of those days’ that started out like any other day. Nothing special really, other than the fact that any day that has 20″ of snow attached to it is special. It got started with me helping our new snow reporter, Rudy Rybeck, get the numbers correct (in terms of snow reporting).

Due to 16″-20″ of snowfall (that was still increasing even as of 9am Monday morning), I was doing those updates from my ‘home office’, which at the moment is me sitting at my laptop on the kitchen table. For some reason, on this particular snowy morning, I was waxing a bit philosophical. I thought to myself, ‘Gracious, this is where my youngest daughters have seen me camped each morning…doing the morning snow report and FirsTrax stories.’

I have always enjoyed it, and I would imagine they drew some comfort from – ‘this is something dad just does every winter’. At any rate, most winter mornings, especially on weekends and Holidays ‘dad’ would sit at the table and communicate with you guys. More often than not, a cup of coffee is handed to me by my wife – which, by the way, is THE ONLY time I drink coffee. Anyway, that’s how Monday morning started.

Around 10:30am or so I figured I’d go and dig my truck out of the snow bank that had enveloped it over the last 24 hours and change. I often brag about ‘never getting stuck’ or ‘never having issues driving in snow’ and yet on this particular Monday I had to hike down to a neighbor’s place where my truck was parked BECAUSE, indeed I could not make it up my drive into my home.

I took my newest puppy, ‘Molly’ with me as she, like me, loves snow. I’ve been blessed to have amazing dogs over the last 30 years. My best canine friend was ‘Dakota’ who passed away unexpectedly about a year and a half ago. He was special. I’ll leave it at that. All my dogs seemed to share my love of snow, but perhaps this new one, ‘Molly’ does so more than all those who came before her.

So ‘Molly’ and I hiked down to my truck and I spent the next hour or so digging it out enough where I could then back it down the road to where the snow plows had performed their magic and then I headed to the office for a bit.

I was here working for about an hour when there was a knock at the door. I walked up front to where four guys from Mississippi, Alabama, Arkansas and I forget where else – introduced themselves and literally said, “Sir, I wonder if you could drive us up to Sugar Mountain so that we could go snowboarding and skiing.” He quickly added that he was willing to pay me $100 for my time.

You can’t make this stuff up.

I looked at him in a way that I am certain told him that I needed to hear the whole story. I mean, there’s nothing about our entrance that says ANYTHING about skiing or snowboarding, much less ‘SkiSoutheast’ etc. I mean, ‘Appnet’ doesn’t exactly evoke the idea that we have anything to do with skiing or a taxi service or Uber, etc.

As it turns out these good old boys from all-points-south had been working over in Winston-Salem in some welding operation and they heard about all the snow and they decided to head up – in their big old welding truck. Along the way they came upon a guy who was stuck on the side of the Interstate ON HIS WAY to Sugar Mountain to go skiing. They rescued him and then as they got to within a half-mile from our offices…THEIR truck broke down.

Hence, they had the idea of asking the next stranger who came along if they would take them to Sugar Mountain. Imagine THEIR luck! Here they break down right in front of the office of the guy who considers it his honor to write about the ski areas of our region every day.

I introduced myself, and of course told them to keep their money, and that I would be happy to drive them over to Sugar. We threw their gear in the back of my truck and we headed up the mountain.

Along the way I heard these big old, country boys going on and on about how ‘beautiful this town’ is; about ‘how gorgeous Grandfather Mountain was’ – all dressed up in white and about ‘how blessed we were to live here’.

As I got close to Sugar, the bottom parking area was full – which surprised me a bit – and I drove on past the guy who was feverishly attempting to get me to turn in. When I got to the top of the drive, right at the foot of Sugar, my buddy and former farrier for all of my horses – and LONG TIME Sugar employee, Joe White was waving me to pull into another parking area. He seemed none to happy when I ignored his direction and drove on past. I DID stop to say ‘Hi’ and he said, “I noticed it was you and figured you had a reason for driving on past.”

So I drove the guys right to a spot below the ticket window and let them out. The lift line was probably 25 yards long (no kidding) at 11:30am or so…so I gave them a little-known, insider’s secret about how to get a lift ticket at Sugar without standing in that long line. (Thanks to another friend and long-time Sugar employee, Len Bauer, for that little secret.)

After a round of hearty hand-shakes, I left them to their fun day and my wife and I drove over to Banner Elk Cafe for a couple of beers and a burger. The drive over to Banner Elk and back down into our ‘blizzard covered neighborhood roads’ just kept nudging me about just how blessed we are to live and work in this area that so many want to visit.

That’s the life that all of us ‘mountain folk’ live. I don’t think it ever gets old. I pray not.

I’ve lived here now since October of 1990 (28 years) and in that time I have had the honor and pleasure of providing a helping hand or rescue to countless people. I can’t tell you how many people I’ve pulled out of a ditch or bank of snow. Over the years, my wife and I have taken in dozens of strangers in need who spent the night with us to avoid being stranded in the snow.

…and today we were able to provide a small ‘assist’ to four dudes who just wanted to get to Sugar. Seeing the excitement on those grown men’s faces as we drove up and they saw the slopes of Sugar for the first time was priceless. Listening to their voices as they were going on and on about how beautiful everything was…was heart-warming and special.

It was just another chapter in ‘The Best of Times’.