The Best Day of Skiing and Snowboarding of the Season Awaits You! 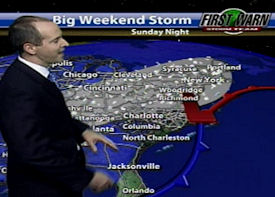 We’ve heard from our buddy, Brad Panovich this morning and you’ll have to check out the video forecast for today for all of the details. Suffice to say that he’s as excited as the rest of us over all this snow that we’ve seen in the past five or six days. He’s also talking about "THE NEXT MAJOR SNOW STORM" that should be hitting Sunday night and last into next week bringing MORE significant snowfall. Additionally we’re looking at great snowmaking temps with the exception of perhaps a day or so over the next week so resorts will continue to build base depths. 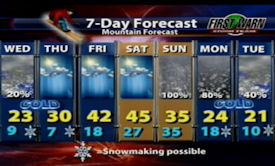 Check out the continued cold temps!~>>>

Brad DID say one thing in his skier’s forecast video that we’d like to elaborate on. He mentioned that the resorts are going to have such great temps that their snowmaking ops would probably allow them to build enough base to "last the rest of the season". That’s probably not exactly accurate because even though we’re seeing some soaring base depth numbers a "thaw" period of more than a week or so would put a huge hurting on those numbers. So resorts will continue to blast away as they can to "weather" those iffy days that we always seem to get mid season.

Today very well might be THE BEST day to ride of the season as the winds should be dying down and the sun should be coming out at some point mid day .

Be sure to check out Brad’s Weather Update and visit www.HighCountryWeather.com for the updated skier’s forecast.

Let’s get right to a TOUR of the open ski areas today and be sure to check out www.SkiSoutheast.com for more openings around the region.

Beech Mountain Ski Resort – 2° – No report of new snow although John Hoffman from Fred’s on Beech was reporting about 1/2" of snow in the last 24 hours. The official CoCoRaHs reporter for up there is Gil Adams and from his Beech Mountain station he is reporting another 1.6" of new snow. Beech has seen 23.6" from this crazy storm and they will operated for day sessions only today with 5 of 15 trails.

Cataloochee Ski Area – 17° – Not reporting any new snow but picked up 10" on the storm. They are open from 1-10pm Wednesday with 11 of 16 trails and some terrain features.