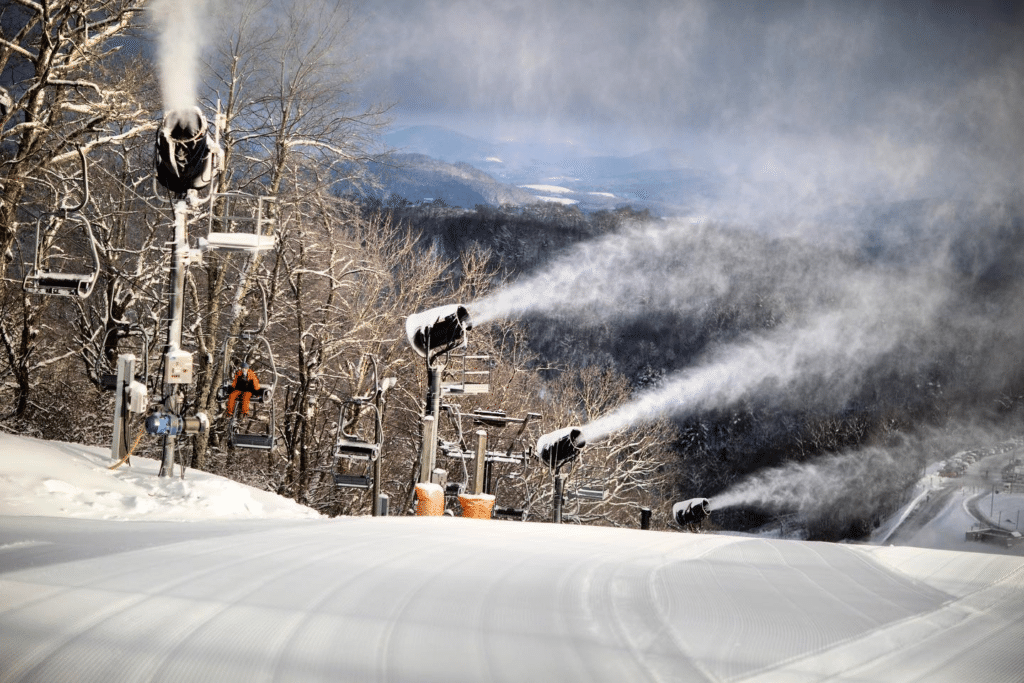 Just like that – Mother Nature decides to drop the temperature in the higher elevations of the Allegheny Mountains (as well as those in Western North Carolina) and what happens? You guessed it, snowmaking commenced. Snowmakers for various resort mountain operations took advantage of the sub-freezing temperatures to not only test out revamped systems, but also to start putting a cover on the slopes as the 2021-2022 season is hopefully a few weeks away.

There is nothing like getting on social media early in the morning and checking the webcam page on skisoutheast.com to see manmade snow falling to the ground. That is a beautiful site with one eye open and one eye still closed around 5 am or so.

In years past, we might’ve called this early snowmaking “marketing snow” to get everyone excited about the upcoming season. I don’t think that was the case this time around, because what I could see is that as long as the temperatures allowed, the guns were operating at full force. It was a site to behold.

I guess the race is on now to see what resort will be offering some type of skiing and snowboarding product for the season. That honor usually goes to a North Carolina resort and if the temperatures hold, it wouldn’t surprise me if that doesn’t happen again this season. Remember, in columns past, I have always said that for the most part you only need six to ten inches of snow under your equipment to make the experience happen.

For those of you unfamiliar with snowmaking operations, the snowmaking crews weren’t just sitting on their hands, idly waiting for the temperatures to drop below freezing to get things started this season. No sir, every mountain operations staff has been busy all summer and early fall fine tuning each resort’s snowmaking operations, to make sure there were no leaks in the water system and that each snow gun was in operating order.

So, while the rest of us were enjoying the sunny days of spring, summer, and early fall, all the region’s snowmakers were out there on the slopes manning shovels or backhoes, moving dirt, replacing, or repairing underground pipe used in the snowmaking process.

These are a few more reasons why I consider snowmakers the unsung heroes of the snow industry. You just know exactly what they do to make sure when you hit the slopes with your ski or snowboard, that there is plenty of snow for you to enjoy.

For snowmakers to get the job done though, they have to have the financial backing of every resort. Believe me when I say there would be NO ski industry in the southeast if it wasn’t for snowmaking. At the end of the day it is the life blood of the sport in this region. When you only get a little over 100 inches of natural snow every year, it’s got to come from somewhere and that somewhere is out of the barrel of a snow gun.

That financial backing I am referring to in the above paragraph is the millions of dollars that is invested in the snowmaking process every season by every resort in the region. No matter what type of financial return occurs during the season, the number one capital expenditure every year, that is if a new lift isn’t added, is for snowmaking operations.

When I talk about millions of dollars I am not kidding. The type of snowguns being used these days by snowmakers and the type of piping needed is not cheap. With that in mind, I haven’t even mentioned anything about replacing air compressors or saving for the upcoming electric bill. Speaking of which, during the winter months in many cases the local ski resort is the largest electric customer for the local electric utility. You think your monthly bill from the power company is high, well you wouldn’t like to see or pay for the amount of power used every season by the region’s ski resorts.

I realize it is not the most pleasant thing during a day on the slopes, when your favorite trail has snow being made on it while you are skiing or snowboarding on said trail. Now think about it a little bit, when was it truly the last time this has occurred. For yours truly, not very often in recent years. You see, the art of snowmaking has come light years forward from the first time it occurred for me.

Most of the snow being made on open terrain occurs after the slope has been closed for the day by patrol. That is when the guns can be moved to the middle of the terrain and aggressive snowmaking can take place. When I say aggressive snowmaking, I mean like tons of snow per hour, weather permitting of course.

I know there are times when you show up to your favorite resort for a day of fun on the slopes and it seems like snowmaking is taking place everywhere. Well, that is probably because a freeze thaw cycle just occurred, and the snowmakers are trying to recover the slopes that were open and well you just have to put the goggles on and deal with it for a day or two.

During the beginning of the season though, after enough snow has been made to open a slope, the snowmakers move on to the next trail so that the incoming crowd can be spread out over the open terrain. Again, this can happen because of those millions of dollars that have been invested in every system.

So, do yourself a favor when you know the temperatures are below freezing at your favorite resort and check out the resort’s webcams and sit back and enjoying the beautiful sight of snowmaking.

That’s it for this week. As always, thanks for joining me for my weekly thought process. Just remember whether it be cold or whether it be warm, we’ll weather the weather, whatever the weather will be. This season is going to be a fun one, so get ready for a fun slide. I look forward to seeing you on the slopes.