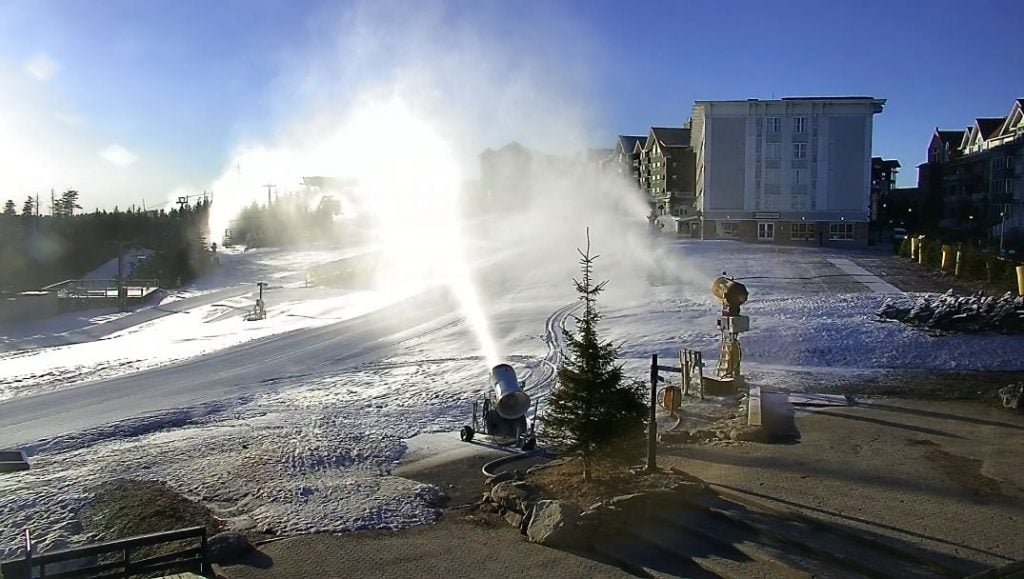 Outside of November when the season is just beginning, I’m not sure I’ve ever been more excited to see snow guns on than I was last night.  After what seems like an eternity, although only less than two weeks, snowmaking took place at a few ski areas in the region last night.  I wasn’t the only person who was stoked to see it going on, as I received a few emails and messages on social media from others who were watching the cams as well.  It’s amazing how much a single night of snowmaking can raise morale.

Sugar Mountain got the party started yesterday late afternoon as they began to make snow from mid-mountain up.  I had to chuckle a little bit as the temperature at the base was 39 and the summit was 35, but who cares.  I love Gunther’s aggressiveness.  Cataloochee and Snowshoe Mountain joined in a little bit later.  After a frustrating several weeks it was nice to be laying in bed, seeing snowmaking at all three locations, and knowing that this morning report wouldn’t be another dismal one.

To be honest, I figured Snowshoe would make snow but I didn’t know how cold it would get outside of that part of the region.  Temperatures at Cat and Sugar were definitely marginal.  You’ve got to love their commitment though and I think I speak for everyone when I say THANK YOU.

A few other resorts look like they could have made snow if they wanted to.  That makes me wonder how long they are going to try and extend their season.  Hmmm…

We’ll see the guns turn off shortly and they will stay that way until Thursday night at the earliest.  We have some winter weather incoming for parts of the region on Friday.  Folks joining us at the Summit at Snowshoe Mountain this weekend might be rewarded with some late season snow.  Here’s Brad Panovich to explain more.

The models have been hinting at a snow event on Friday for the West Virginia ski areas since late last week.  I’m leaving Thursday after work and heading to Snowshoe to make sure I make rope drop at the top of Ballhooter on Friday morning.  The weather models have gone back and forth on totals a bit, but as long as I get a couple inches of snow I’ll be a happy man.

The weekend in general is going to be much colder than recent weeks.  In between now and then?  Mild-ish temps with some underdeveloped snow tomorrow and Thursday.  We’re just going to ignore that for now.

The chance for snowmaking this weekend is there as lows overnight will get below freezing for many resorts.  I feel confident in saying that the three resorts who made snow last night will do the same this weekend.  I’d also lump App into that category as well as long as it gets cold enough.  As for everyone else, I’m not sure what to expect especially after last night where some didn’t turn the guns on even though they could.  We’ll just have to wait and see.

If you’re contemplating going somewhere this weekend to make some late season turns, just do it.  Who knows how much longer we’ll have and if we get some natural snow and snowmaking then you’ll be pleasantly surprised at the conditions.  Sugar, Cat, and Snowshoe all look much better this morning after a single night of snowmaking, so I’d imagine it’ll look even better this weekend.

I have a few updates to the itinerary for this weekend, with the main bullet point being that we’re going to mix things up and not do a party at Hoot’s this year.  Instead, we’ll be at the Boathouse on Saturday from 1-2pm and Mike is going to be buying lunch and beers for everyone.

Friday night – 7pm until close –
Look for SkiSoutheast’s peeps over on Silvercreek Trails. We’ll have some stickers and maybe some beanies and hats to give away.

Saturday 1pm – FREE LUNCH – At the Boathouse at the Bottom of Ballhooter Lift
SkiSoutheast.com is buying hamburgers, hotdogs and brews from 1-2pm. Show up, look for us on the deck or inside and we’ll cover your lunch. This deal only applies to those booked through Snowshoe and on our attendees list.

Saturday night – 7pm until close –
Look for SkiSoutheast’s peeps over on Silvercreek Trails. We’ll have some stickers and maybe some beanies and hats to give away.

Sunday morning – 8am – FIRST TRACKS
For those who wish to ski the mountain before anyone else marks up the snow, simply show up at the top of the Soaring Eagle lift at around 8:10-8:15am and you can ski the mountain for 30-45 minutes with Snowshoe and SkiSoutheast.

If you haven’t made plans yet to join us, we’d love to have you!  It’s shaping up to be a great weekend.

That’s it for today, enjoy the snowmaking while it lasts this morning.  We’ll see more in a few days though!