Sundays are always my ramble days; a day where I can exhibit by inner, digital nomadism. So for all of the details on just how sweet the conditions are across the region – check out the SNOW REPORT. Here’s a hint: The conditions are super-bowl, sweet everywhere.

Around mid-day on Saturday, Meteorologist Brad Panovich shared that eight years ago on February 12th, 2014, we saw 16″-21″ of snow across portions of the western, North Carolina mountains. 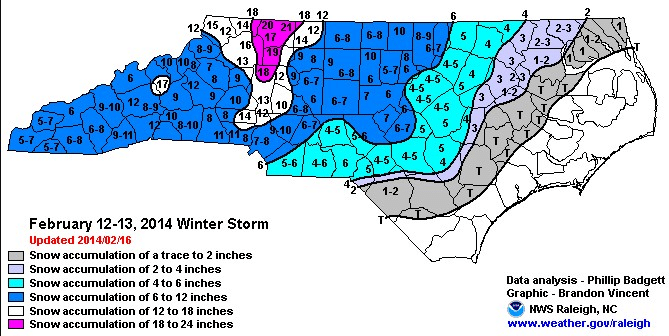 It was pretty snowy across the entire region from the snowOMG event as David Lesher’s archives show that Canaan Valley saw an increase of 31″ of snow between the dates of February 10th and February 20th, 2014.

Things are not THAT snowy today, however, some snow did fall overnight and we are still seeing some natural snow flying via many of the mountain and ski cams. < Check them out.

The temperatures took a nosedive overnight last night and that inspired a number of the resort, snowmakers to crank up their aerial arsenal. I was watching Canaan Valley, Cataloochee and Ober Gatlinburg blasting the slopes with manmade powder. Mix in God’s version of natural snow and today will be p-r-e-t-t-y sweet.

Snowfall Observations as of 7:30am:

So as you can see, this particular snow event dropped a bit more snow in the Virginia, West Virginia and Maryland ski towns and resorts, with Omni (The) Homestead Resort being the biggest winner with 4.5″ of snow. Interestingly enough, for those of you who notice these kinds of things (as I do) – the Virginia ski resorts have actually seen MORE SNOW than normal for this time of year. Case in point would be resorts like Wintergreen Resort in Virginia will normally see 34″ for the ENTIRE season and they are already at 31″ of the season.

If you make November 15th a typical startup date for snowmaking and kick-starting a ski season and March 31st as the last day – that provides us with 137 days. Some resorts wait until December 1st and close up around March 20th and even that would be 109 days. Either way, we either on day 74 or 83 of a typical 110-130 +/- day ski & snowboarding season. That would put us with about 33% of our ski season left. (I’m still thinking five to six weeks left.)

When you look at it that way, the Virginia ski mountains are all WELL ahead of their normal amount of seasonal snowfall. All if them are approaching 95% of their normal snowfall at the 66% point in the 2021-2022 season.

The West Virginia resorts are from 33%-36% of normal at the same 66% mark of the season. Snowshoe’s 66″ of snowfall-to-date is well off their average of 180″ on the season and about 52″ below normal for this date on the calendar. Ditto that for Canaan Valley and Timberline. Winterplace Resort is about 30″ below normal at this time.

Beech Mountain Resort usually sees around 80″ within a normal season and at this point on the calendar they should be at around 52″ and with there snow tally to date of 45.5″, they too are off, but only by about 6″-7″.

I’ll get into more detail for ALL of the ski areas when it comes to natural snowfall – perhaps in the next weekend or two, but since I am looking at trends for the WV resorts, it might be time to update their marketing material regarding annual snowfall as for the last sixteen years, Snowshoe Mountain has averaged 145.6″ of snow, rather than the 180″ that is marketed. In fact, Snowshoe has only hit that magic 180″ mark in snowfall on FOUR of the last sixteen years with 229″ falling back during the 2009-2010 season. Man we need another one of those years!

For those who will ask:

Beech Mountain Resort has hit their annual average of 80″ twice in the last four years and may do it again this year as they are only 6″ or so off their normal to date. The biggest snowfall season at Beech was back during the 2010-2011 season when they hit 130.5″

Virginia’s largest resort-located snowfall in the last sixteen years was at The Homestead Resort with 54″ and Wintergreen surpassed their average during the 2018-2019 season with 44″ and they too look to easily surpass their average seasonal snowfall this season.

So while some might suspect that we have some sort of a snow-drought of epic proportions happening across our region – not so. It just seems that for the last three seasons, the weather patterns have kind of favored the Virginia and North Carolina resorts in terms of keeping their averages up – while STILL favoring the West Virginia and Maryland ski areas with the most snow.

In Case You Missed it…

Here is a short video capturing the natural snow falling this morning. I know some of you are not early birds. I know that because I can ski without lift lines at any ski area in the region as long as I get out at rope drop (8:30am to 9am). So by the time many of you guys are reading this FirsTrax post, the snow will have stopped. Hence, here is what you missed:

Of Course, NOW it Snows in Beijing!

We’ve been reporting about how little natural snow that Beijing gets each February and BOOM they get a big one! The photo above shows srew members preparing the course as snow falls ahead of the first run of the men’s giant slalom during the Beijing 2022 Winter Olympic Games on Feb. 13.

One person, Henrik Kristoffersen, of Norway, said succinctly of the visibility, that he couldn’t see s**t.

Gotta Get Me One of These!

Would make a great ball marker for my golf game! Canaan Valley’s 50th anniversary commemorative coins are now on sale at the Mountainside Gift Shop in the Bearpaw Lodge. Celebrate their 50th year of skiing and purchase yours today! These coins are on sale for a limited time only!

Our Ski Resorts Catching the Eye of Home Buyers, Like Never Before

I moved to Seven Devils, North Carolina thirty-two years ago from the midlands of South Carolina because every time I visited the area – it just felt like home. I never wanted to leave and once I moved here, I haven’t. During much of the pandemic-influenced 2020-2021 ski & snowboarding season tens of thousands of new visitors experienced much the same feeling.

They came; they saw; they fell in love with the place; and they decided to buy. That’s my story as well.

During most of the 2020-2021 ski season, I wrote about the record number of people who were visiting each of our mountaintops. I received some emails and texts that disputed that. However, fast-forward a year later and the evidence is everywhere. Skier visits were up and in some cases way up at all but perhaps two or three ski areas in the region. During many of the record or near record visitation weeks and weekends, people were introduced to their new favorite home-away-from-home and according to realtors across the region – home sales are breaking some records as well.

As many of you know, I own and operate a web design firm and our largest niche of clientele are realtors. We’ve built more real estate websites than I can count. I speak with dozens of agents monthly and across the board – every realtor I know is smiling these days.

I was reading an article about how SOME ski communities are seeing such an increase in home buying that it is affecting local’s opportunities to find affordable, long term rentals. One of those communities is within our own ski coverage area of Davis, West Virginia – home to Canaan Valley Resort and Timberline Mountain.

The small town of Davis, WV has a population of only 674, and according to Mayor Al Tompson, tourists can increase the population to around 10,000 on the weekends. The mayor said tourism to the area boomed in the last couple of years due to the COVID pandemic, and as a result, people from out of town are buying second homes at near record numbers. As he shared, and I am privy to – many of those buyers are second-home buyers and they often place those homes in vacation rental programs, whether with a local rental agency or with outfits like VRBO, AirBnB and others. When they do those short-term rentals, they pull those homes out of the market to those who live in those communities who need long-term rentals.

Mayor Tompson and the leaders of Davis, WV decided to put a moratorium on short-term rental business licenses last August as a result of those concerns. The moratorium was supposed to end this past January, but was extended during the last town council meeting to the end of June. Tompson says the reason behind the moratorium is to put a pause on creating more short-term rentals while the town comes up with some solutions.

Realtor.com – the ten-thousand-pound-gorilla in the real estate market recently released their top-ten most affordable ski towns and they placed Snowshoe Mountain at number FIVE on their list – with the median list price being $139,900. Condos at the resort are abundant, and prices range from $60,000 to $1 million. I can also share that single-family homes can go as high as $3M+. (Not sure about that median price!) What I will say is that all of our mountain communities, from McHenry, Maryland to Snowshoe Mountain, to Wintergreen, Virginia to Blowing Rock, North Carolina – ALL offer a wide range of homes and condominiums in the $250K and up range. Like most everywhere right now, FINDING a home to purchase is a bit more of a challenge than it was BEFORE 2020 because as most realtors in the area will tell you – INVENTORY IS LOW. Selling your home in the mountains is a piece of cake. If you own a home in the mountains right now, you can list it and expect to get multiple offers and most often you’ll sell it significantly above your asking price or local estimates. So this is a SELLERS market.

I received daily updates from First Tracts Real Estate at Snowshoe and I can tell you that a two bedroom, two bath CONDO in Allegheny Springs is going for $330,000. So, again, not real sure about Realtor.com’s story.

However, there are tons of people who are visiting our mountains daily right now and a lot of them are loaded (doing quite well financially) and they are buying at near record levels, which bodes well for our mountain communities.

As one of my realtor buddies shared with me, “Mike, I know you cover the ski areas in five states and all of those ski towns cater to people with plenty of cash to spend. Surprisingly, some of our little ski communities have home prices that fall below the national average with it comes to median home prices. Those with plenty of money are paying attention and gobbling up deals when they see them. Despite what some of these national outlets say, the mountaintop towns close to all of our ski areas offer some pretty attractive pricing to those off the mountain.”

Winterplace Resort: not JUST for couples on Valentine’s Day! They posted:

We love our visitors – so we want to celebrate accordingly!
Get two lift tickets for the price of one – $77.00!
Click here to learn more

Here are some of today’s best photos.

That will do it for me today. Email me at [email protected]t.com