Sunshine and Spring Conditions for the Day After Christmas! 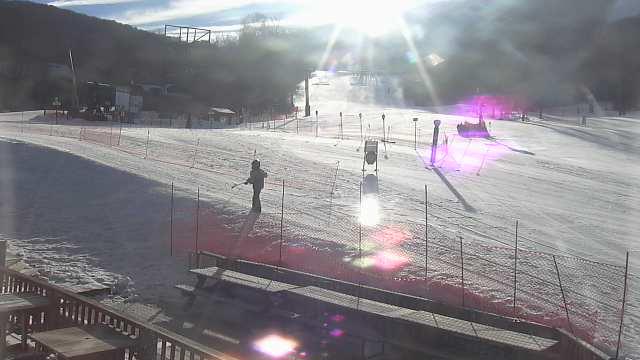 Christmas has come and gone…boo!  I hope everyone had a Merry Christmas and received some good gifts.  I think my favorite gift was my home brewing kit.  I shall be making a special Ski Southeast brew in the near future!  Naturally, it will be an IPA.

It’s been a hectic couple of days for me as I had last minute shopping, two sides of my family to visit for Christmas, and then I drove to northern Virginia last night to visit my girlfriend’s family for a few days.  I haven’t been able to check out the cams or morning reports over the last few days, but I’m pleasantly surprised this morning, for the most part, to see that colder temperatures and snowmaking over the last 36-48 hours has fluffed conditions up a bit at some of the ski areas.  We’re still now where we want to be, but the resorts have done a fantastic job of dealing with the cards they’ve been dealt.

Blue skies and sunshine at Wintergreen this morning.

The weather this morning is much warmer than yesterday at this time.  There’s some crazy inversions gong on.  From Wintergreen’s blog…

“All dressed up and nowhere to go.  Temps did not fall overnight.  Instead, warm air remained aloft causing an inversion.  It is 26 in the Valley, 36 at the ski area and 42 at the Wintergarden.”

It looks like snowmaking is done for the next few days.  That’s not a terrible thing for some resorts that have a decent base and open trail count.  I’m not going to lie, there are a couple of resorts that I’m worried about, especially with the forecast calling for underdeveloped snow on Sunday and Monday.  For the most part though, everyone should make it out fine.

The holiday crowds will have a much better experience without the constant sound of snow guns blasting the slopes.  Heck, today and tomorrow will offer spring skiing conditions you could say.  Temperatures will be in the 40’s and 50’s with plenty of blue skies.  While it won’t be what you’d expect for late December, you can’t complain about hoody days!

As I mentioned, Sunday and Monday look a little on the wet side.  Blegh.  The good news is that we finally have some really cold temperatures returning just in time for New Year’s.  Tuesday through at least Thursday look frigid and more reminiscent of this time of year.  Mother Nature must be looking out for me, because that’s right when I’ll be getting back home from Virginia and will be feening to go snowboarding again.  Let’s hope it’s the beginning of three months of nothing but cold and snow!  This roller coaster beginning of the season is killing me! 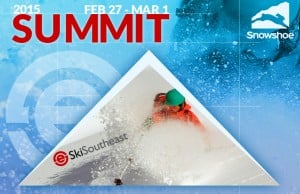 Before I go, I wanted to remind you all about the 2015 Ski Southeast Summit at Snowshoe Mountain.  I’ll probably be doing this once a week for the next two months so get used to it! Ha.  We’ve still got a while to go, but it never hurts to plan early.  Click the link below to get more information.

That is all for me today.  Mike is probably on a plane right now headed to Vail (so jealous), but I think he’ll back back tomorrow to do his thing.  Don’t forget you can look at all the current conditions, trail counts, etc. on the SNOW REPORT PAGE.  It’s all right there for ya.