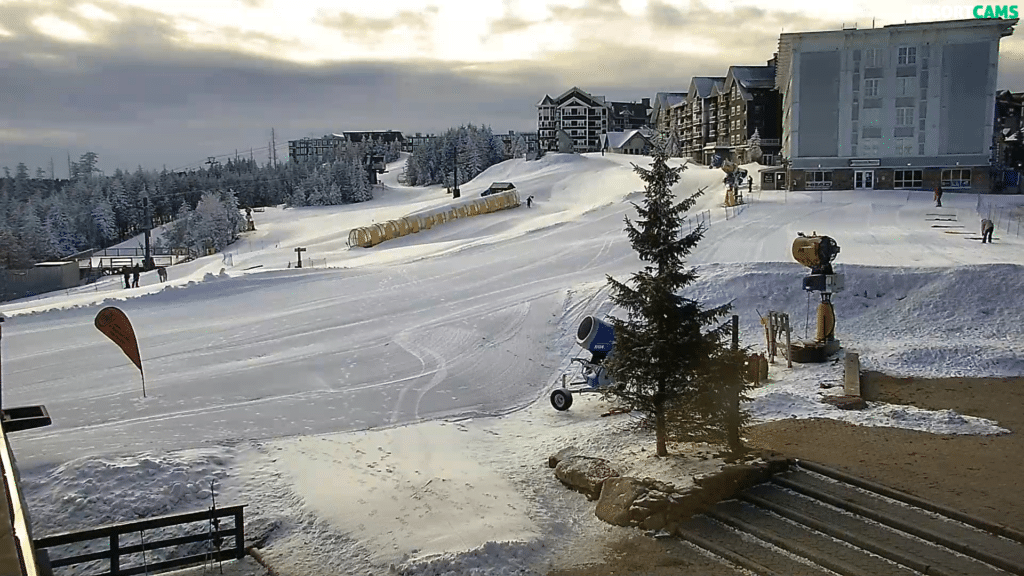 Check the SNOW REPORT for all the deets. Today’s conditions really look like a “tale of two regions” as it is simply colder into portions of Virginia and West Virginia. As of 7:30am this morning I was seeing temperatures hovering right around 32° to 33° in the North Carolina mountains with a mix of (mostly) rain and a touch of snow falling.

Those borderline temperatures prevented any of the North Carolina or Tennessee ski areas from making snow. Just north of us, into Virginia, things were just a notch colder which was allowing resorts like Wintergreen Resort – to make snow with their awesome “Snow Power” system. Still further north into West Virginia and Maryland we were seeing temperatures MUCH colder into the upper teens and low 20s. THOSE colder temperatures made for LOTS of snowmaking across Snowshoe Mountain, Canaan Valley Resort, Timberline Mountain and Wisp Resort.

The fresh groom we have come to know and love is back and there’s a dusting of snow on the trees to return our backdrop to a winter wonderland. The Berming Man event went off on Saturday, and we’ve opened up the course to the public today for all the rippers out there to see if they have what it takes to compete next year. There will be a delay on Evolution for the morning, as our production team films one of the best up and coming snowboarders in the game.

Conditions will be wet and variable but with PLENTY of good snow coverage on the slopes. Looks like most of the ski areas (at least those in North Carolina) lost another 2″ of base depth. However there is a LOT of snow out there and the more favorable conditions will certainly be found in West Virginia, with “honorable mention” / next level conditions in the Virginia mountains today.

I am embracing my inner digital nomad today and will be providing my best attempt at what has become my time, each Sunday to ramble. I’ve received a pretty significant number of emails from readers who seem to prefer these, more casual days where I kind of saunter, amble, maunder or otherwise mosey my way around the region’s ski mountains in an attempt to share some measure of entertainment about all things skiing & snowboarding here in the Southeast.

Today I will begin with the video clip from 1999. My wife has been transferring hundreds of old family movies that were originally shot with an old RCA VHS camcorder – to digital, mp4 files.

Man we must have LIVED with that camera on my shoulder as we have more than 2000 hours of film and a lot of it was on the slopes at various ski hills of the region. I’ll probably share some of the cooler ones in future FirsTrax posts – especially ones that show some of the more colorful ski outfits and some vintage looks at the resorts themselves.

This first video share is from 1999. SkiSoutheast.com was not (quite) yet a website as we started out originally as SkiNorthCarolina.com or SkiNC.com as most of our early readers knew us. SkiNC.com was barely two-and-a-half years old and we had only a small, loyal readership. While today’s annual traffic exceeds 27 million visitor sessions, and over 82 million pageviews – I remember that back then we employed one of those digital odometer-looking, counters at the bottom of the home page and I felt honored and excited when that bad boy would trip 200 visitors in a day.

At that time Fox News had ALSO just debuted (in 1998) their Fox & Friends morning show starring and hosted by E.D. Hill, Steve Doocy and Brian Kilmeade. I was an early fan of the network and show, as was my younger brother Ron. While Ron was not a frequent skier, he and I did work together to form our fledgling, web design firm and a very small part of our internet offering was SkiNC. While he wasn’t active on the website, he was proud of it and on one special morning he called in to the Fox & Friends show as they were doing some sort of phone-in, geography jeopardy, contest. The gist of it was for the winning caller to be able to share something interesting about their state.

My brother was the winning caller and he was on the air for this national television show. At about the 19 second mark he surprised a young Steve Doocy with a fact about the great state of North Carolina being home to what he boasted ‘was some of the best skiing in the east’. (As I said, he was proud.)

To that, Ron answered, “Well just jump on our website at SkiNorthCarolina.com.”

Steve Doocy was amused at how Ron could parlay that little “game appearance” into a plug for the great state of North Carolina and for SkiNorthCarolina.com.

As I mentioned before, as I was looking at some of the movie clips that we shot back then, I also found a segment where SkiNC appeared on CNN as they sent one of their crews to Beech Mountain Resort to test out various sleds to see if any of the new ones beat the old-school, flexible flyer sleds that were sold by places like Western Auto stores.

I’ll show that clip another day, but suffice to say that I had the winning sled.

Lots of People Are Sharing Their Disappointment with Wolf Ridge Resort’s early closure.

Wolf Ridge Resort announced on Saturday morning that they were “sadly” closing for the season after the rains had left their slopes bare. Their last day of skiing or snowboarding for this season was actually on Tuesday, February 22nd. They didn’t BEGIN their season until the day or so before Christmas day so many are expressing complaints – especially anyone who purchased a season pass. They barely got in 60 days on the slopes and many of those open days were only with 3-4 slopes open. Some season pass holders even suggested that Wolf Ridge barely offered 40 days of skiing this season.

Some readers are using the closure to express how much “climate change” was/is at play, while others are (rightfully) stating facts that Cataloochee Ski Area is just 51 miles away and not only opened on November 20th – but they are still going strong with a base across all of their slopes of 41-61″.

Interestingly, there have not been many comments (good or bad) on Wolf’s Facebook page, but even more interesting is the fact that nobody from Wolf Ridge Resort’s management or marketing team seems to care enough to even address some of the comments.

After a lackluster at best, 40 day season, I hope they use this off-season to actually put in some effort and address some of the rampant infrastructure shortcomings showcased these last few seasons, and better yet, maybe even upgrade something for a change! Relaxing during the 10 month offseason doesn’t seem to be working.

Not sure if some of you will pick up on the “10 month offseason” comment. Most resorts in the region are off only about seven to eight months.

Seems like a lack of leadership and or a combo of inadequate snowmaking systems and training? Cat, Beech, Sugar, and App are all going strong and making major improvements year after year with infrastructure, programs, marketing etc. Currently all said resorts are in phenomenal condition with still almost 100% coverage. As a longtime former resort operations manger this is very puzzling. If you are not in it to win it then why be in it at all.

At this point, we could use anything other than “thinking snow” while every other mountain is actively making it.

Richard I agree…the leadership really has to be held accountable. It’s easy to blame xyz, but EVERY other NC resort is crushing the Wolf. It’s sad…as when fully open (like 5 days a year) it’s a great mountain.

All the while, crickets are chirping from anyone connected with Wolf Ridge Resort.

You can see a lot of other comments on SkiSoutheast’s Facebook page with the link below:

We will be posting Joe Stevens’ Snow News is Good News column in a bit, but Joe texted me a photo yesterday that almost had me spew my drink all over my truck dashboard. Joe started out skiing many years ago, but quickly switched to snowboarding. However, at his son Christian’s prompting, Joe got back on skis for a day on the slopes yesterday. I am sure we will hear more about that later today. Stay tuned.

Unfortunately I have to curtail today’s post as I had a plumbing leak overnight that crashed the ceiling in my workout room. Plumbers are on the way. So adios for now.